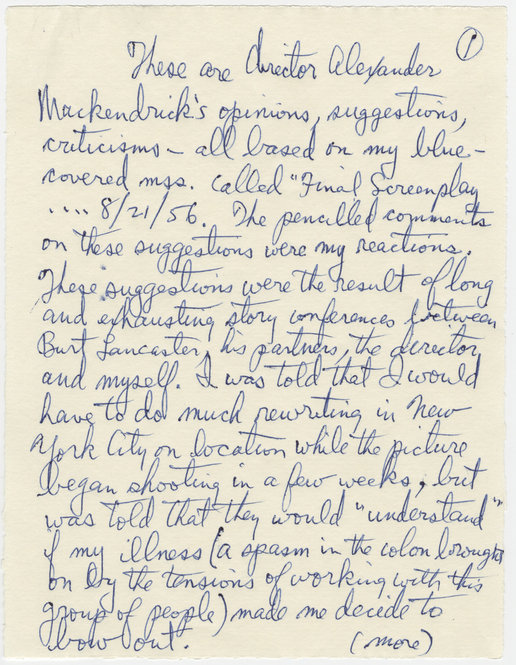 The Austin Film Festival, in partnership with the Ransom Center and Los Angeles Times’ film critic Kenneth Turan, will be screening Sweet Smell of Success (1957) at the Alamo Ritz on Friday, October 22. The Ransom Center holds screenwriter Ernest Lehman’s archive, which consists of more than 2,500 items from his personal and professional files. The collection covers Lehman’s 40-year career in New York and Hollywood not only as a screenwriter but also as a novelist, short story writer, journalist, producer, and director.

Sweet Smell of Success began as Lehman’s novella titled Tell Me About It Tomorrow, focusing on the seedy underworld of gossip columnists. Lehman was set both to write and direct the film, but the process was so stressful that he developed medical problems and had to bow out. Clifford Odets took over screenwriting duties, and Alexander MacKendrick directed. Despite the production difficulties, Sweet Smell of Success is now regarded as one of the best of the film noir genre, with Odets and Lehman sharing screenwriting credit. In 1993 Sweet Smell of Success was added to the National Film Registry by the Library of Congress for being “culturally, historically, or aesthetically significant.”

Below are Lehman’s handwritten thoughts in response to director MacKendrick’s notes concerning the screenplay as of August 1956. Lehman’s two pages provide insight about why he had to leave the Sweet Smell of Success project on doctor’s orders and take “a long and work-free vacation.” Lehman ends with “I loved Tahiti.”