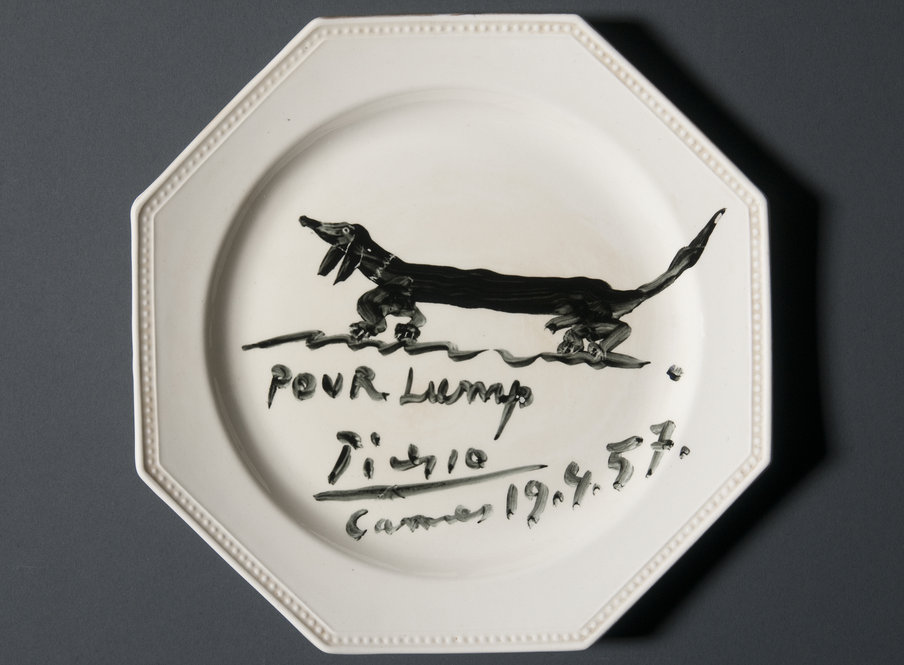 The Ransom Center has received a plate painted by Pablo Picasso from David Douglas Duncan, a photojournalist whose archive resides at the Ransom Center.

Duncan donated the plate in honor of his friendship with Stanley Marcus, who suggested that Duncan donate his archive to the Ransom Center in 1996. The archive includes more than 36,000 prints, 87,000 negatives, and 21,000 transparencies, in addition to correspondence, manuscripts, camera equipment, artwork, and personal effects.

Picasso painted the plate, a piece of commercial dinnerware, at his home Villa La Californie in Cannes, France, on April 19, 1957. Dedicated to Duncan’s dog Lump, a dachshund, the plate is 24 centimeters in diameter and contains a portrait of Lump.

Beginning Tuesday, February 1, the plate will be on view in the Ransom Center’s exhibition Culture Unbound: Collecting in the Twenty-First Century, running through July 31.

Comparable painted plates by Picasso have sold at auction for amounts ranging from $20,000 to $90,000.

Through the encouragement of photojournalist Robert Capa, Duncan met Picasso on Feb. 8, 1956, when he visited the artist in the south of France. Upon his arrival, Jacqueline Roque, Picasso’s companion at the time, led Duncan up to the bathroom where Picasso was in the bath. Duncan presented Picasso a ring he made for the occasion, and a bond was formed between the two men.

Upon Duncan’s departure, Picasso waved goodbye and said, “This is your home—come back!”

In April 1957, Duncan returned to La Californie, bringing Lump with him, and began extensively photographing Picasso, his home and his family in their daily lives. Duncan wrote about Lump’s visit stating, “[a]fter his first exploratory survey of Villa La Californie, it was ‘Adios, Rome!’ and from that moment on Lump became a permanent resident at Picasso’s home.”

While eating lunch one day, Picasso asked Duncan if Lump had ever had a plate of his own. Duncan responded no. At that point, Picasso picked up his lunch plate, and with brush and paint that were at the table, began painting a simple, yet detailed, portrait of Lump. The plate was inscribed to Lump, signed and dated by Picasso, then handed to Duncan.

Reflecting on that moment, Duncan wrote that “[t]hat ceramic souvenir was symbolic of Picasso’s lifelong spontaneous generosity.”
Duncan captured this friendship and Lump’s legacy in Picasso’s works in his book Picasso & Lump: A Dachshund’s Odyssey (2006).