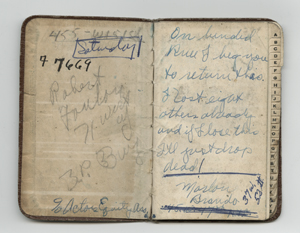 “On bended knee I beg you to return this. I lost eight others already and if I lose this I’ll just drop dead!”

These are Marlon Brando’s words inscribed on the flyleaf of his address book, which was later dropped on the stage of the Barrymore Theatre in New York City during the 1949 run of A Streetcar Named Desire. Brando’s portrayal of the rugged and aggressive Stanley Kowalski in the play stands as the defining performance against which all subsequent actors of the part are judged.

In 1947, Brando auditioned for role. His audition was persuasive, and Tennessee Williams agreed to his casting on the spot. Williams wrote effusively to Audrey Wood about Brando’s performance: “I can’t tell you what a relief it is that we have found such a God-sent Stanley in the person of Brando. . . A new value came out of Brando’s reading. . . He seemed to have already created a dimensional character, of the sort that the war has produced among young veterans. This is a value beyond any that [John] Garfield could have contributed, and in addition to his gifts as an actor he has great physical appeal and sensuality, at least as much as Burt Lancaster.”

Unfortunately for Brando, the misplaced address book was never returned. Instead, it was found (and kept) by the play’s production manager, Robert Downing, and arrived at the Ransom Center as part of Downing’s papers in 1962. Thankfully, Brando survived the loss and continued acting, utilizing his masculine persona and notorious mumbling diction, making a profound impact upon the film industry.

His impact was so significant, in fact, that in responding in 2009 to a reporter’s question “What does ‘Brando’ really mean?” the movie producer of A Streetcar Named Desire and Brando trustee Mike Medavoy answered: “He represents the traditional male, in some ways rebellious, but not all the way.”