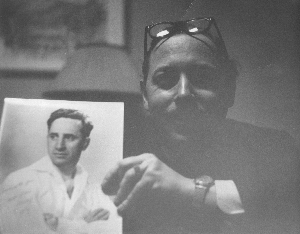 Among the material in the Ransom Center’s current exhibition, Becoming Tennessee Williams, is a picture of Tennessee Williams holding a photograph of Elia Kazan. Kazan was an American film and theater director, producer, screenwriter, and co-founder of the influential Actors Studio. In his theatrical career, Kazan became one of the most visible members of the New York elite, directing highly acclaimed plays by Tennessee Williams, Arthur Miller, and Thornton Wilder, among others. As a film director, he won two Academy Awards for best director and elicited award-winning performances from such actors as Marlon Brando, Vivien Leigh, and James Dean.

Kazan is infamous for the testimony he gave to the House Un- American Activities Committee (HUAC) in 1952. In his testimony he identified colleagues from the theater and film industries as members of the Communist party and was ostracized by many in the theater community as a result. Tennessee Williams continued to work closely with Kazan throughout the 1950s in spite of the controversy.

In response to the Cold War and HUAC hearings, Williams was alternately enervated and energized. In a letter to his mother, Williams writes in reference to Baby Doll, “Kazan and Audrey [Wood] continually pressing me, like a pair of Furies, to get a movie script done. I did it. Then Kazan gets exposed as an ex-Commie and the whole thing is put off. Now he seems to have cleared himself—with everybody except the American Legion—and they now want to go ahead with the picture. . . All quite boring and fatiguing.”

As collaborators, Tennessee Williams and Kazan had a complex working relationship. Williams sent early drafts of his plays to Kazan who would suggest adding or deleting scenes, emphasizing thematic elements, or changing aspects of characterization to improve the dramatic impact of the story. Throughout the rehearsal process Williams often changed or added dialogue as the play evolved under their shared creative vision. Kazan’s influence is most clearly seen in Cat on a Hot Tin Roof (1956), during which he and Williams had clashed repeatedly over the story’s structure; Kazan demanded the re-write in which Big Daddy serves as the catalyst for what seems like a reconciliation between Maggie and Brick. Although Williams wrote every word in the published scripts, the plays on which he worked with Kazan were clearly a collaborative effort.

In an exchange of letters between Elia Kazan and Tennessee Williams about the script for Baby Doll, the strain between Williams and Kazan is clearly visible. In Kazan’s undated letter, he suggests a new “early O’Neill” ending in which Silva Vacarro and Archie Lee bond when Vacarro saves Archie Lee’s life by sucking the poison out of a snake bite, to which Williams blisteringly balks, “I . . . suspect you are disappointed with what I have done so far and are telling me to start over from scratch. This I can’t do.”

When Kazan suggests Williams portray Baby Doll as an ultimately fulfilled woman, Williams counters, “Baby Doll is as deep as cat’s pee. Fulfillment means only one thing, self-knowledge, integration, and how could this comically witless creature, as I’ve created her, achieve such a thing?”

After its release in 1956, Baby Doll met with heated controversy. Although the Motion Picture Authority of America and the New York State Board of censors had approved the film, Cardinal Francis Spellman, speaking for the Catholic Church’s Legion of Decency, attacked it as “evil in concept,” charging that it would exert an immoral and corrupting influence on those who would see it. Catholics were expected to boycott the film “under pain of sin.” Spellman’s condemnation of the film also hinted that it was unpatriotic, drawing on the anti-communist rhetoric of the 1950s to call the film one of the “dangers which confront us at home.” Though Williams and Kazan frequently butted heads during their collaborations, when faced with this controversy, both attempted to defend the film as “the personal story of four small pitiable people.”