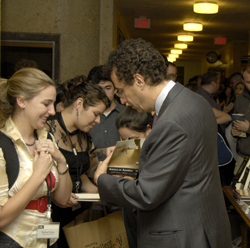 In light of the Ransom Center’s current exhibition Becoming Tennessee Williams, Cultural Compass spoke with Pulitzer Prize- and Tony Award-winning playwright Tony Kushner about Tennessee Williams’s legacy. Read a transcript of the interview with Kushner, in which he discusses how Williams has influenced him, his first encounter with Williams’s works, Williams’s courageousness, and more.

How has Tennessee Williams influenced you?

Profoundly. Of the three major, post-war American playwrights—Williams, Miller, and O’Neill—I had the easiest time connecting to Tennessee when I was young and starting to think about being a playwright. When I read A Streetcar Named Desire for the first time, I fell in love with Tennessee because he was a southern writer and I grew up in Louisiana. The voice was very familiar and powerful to me because he was gay. Even though there were no overtly gay characters, you could feel issues of sexuality that seemed of great moment to me right under the surface of the plays.

Williams, much more than any other American playwright, succeeded in finding a poetic diction for the stage. I immediately identified with that ambition, with the desire to write language that simultaneously sounded like spontaneous utterance but also had the voluptuousness in daring, peculiarity, quirkiness, and unapologetic imagistic density of poetry. Also because it is a written language, the tension between artifice, naturalism, and spontaneity in art has always been exciting to me. I felt that I experienced it really viscerally in terms of American playwriting first in Tennessee’s writing.

I just spent several weeks very happily reading and thinking about The Glass Menagerie, the extraordinary things he accomplishes in it, and how rich, subtle, complicated, and beautiful it is. I spent a lot of time in his letters and journals, and I totally loved reading those. They’re amazing. I feel at the moment, very close to Tennessee. My admiration and love of him is strong right now, as strong as it’s ever been.

What can you tell us about your first encounter with Tennessee Williams and his works?

I suspect the first time was when I saw Katherine Hepburn and Sam Waterston do The Glass Menagerie on television. My memory is that it was when I was in high school.

In my freshman or sophomore year of college, I took an American drama class. There were things that I liked, but everything fell away when I read Streetcar. I just did this evening at the 92nd Street Y for Tennessee’s birthday. At the end of the evening, Alec Baldwin and Angelica Torn did the Mitch/Blanche scene from Streetcar where she talks about Allan Gray’s suicide. There’s nothing better than that. It’s magnificent and jaw dropping. Streetcar has maybe the most beautiful passages of stage English written by an American. It’s just endlessly, endlessly glorious, heartbreaking, rich, and complex.

What do you remember about watching The Glass Menagerie on TV?

I remember finding it moving and thinking that Sam Waterston was really hot [laughs]. I remember being struck by how funny it was, which was a big lesson for me. I don’t actually think you can be a very good playwright unless you have a sense of humor because laughter in the theater is immensely important. The first laugh of the evening is the audience announcing to the actors that it’s sitting there. It’s also a way to communicate with itself. When it’s a big audience-wide laugh, the audience takes its own temperature and begins to assemble itself as a single thing. And a really big laugh is an aggressive thing. It says to the actors: “We’re here and we’re hungry. Keep feeding us. We like this food.” Tennessee was a very, very funny man. “I’ll rise but I won’t shine.” I thought, that’s really funny, that’s a great line. I find the play witty as well as profoundly moving.

How has Williams influenced your plays’ exploration of sexuality?

Any courageous writer inspires other people to be courageous. The courage with which Tennessee pursued a completely forbidden subject and made it have a place on stage moves me enormously.

I think it’s important to always lead with what scares you. You should always aim to go places where you don’t know the answers, you’re frightened about what the answers might be, and you have warning signs that something problematic or troubling might be in this arena you’re investigating. I think it’s impossible to be interesting if you’re being safe. You’ll bore everybody, including yourself. Williams absolutely emboldened me and most other American playwrights. Miller makes it very clear that there would be no Death of a Salesman had there been no Glass Menagerie and Streetcar.

As moved as I am by Tennessee’s clarity about sexuality and his refusal of the closet, I also think it’s very evident that he couldn’t write gay characters. As a result, we have Blanche DuBois, who’s a spectacular female character. But I’m sure it would’ve been salutary for him to write about gay men and gay women as well. Who knows, maybe he wouldn’t have been Tennessee Williams if he had had the freedom to do it. Trauma does produce extraordinary things.

I feel like I haven’t just taken from Tennessee. I’m also inspired by O’Neill’s experimental side and his unsparing investigations into his bone marrow. And I’m inspired by Arthur Miller’s incredible integrity, his unstinting attempts to put our political economy on stage in the form of stage naturalism, and his courage politically.

Tennessee Williams drew on his own experiences to create his work. What has he taught you about how playwrights might use their lives in their work?

I’ve always thought there was a danger in writing an autobiographical play. It’s interesting that O’Neill waited until practically the end of his life, after his brother and parents were dead, until he wrote Long Day’s Journey into Night. Tennessee wrote The Glass Menagerie when his father and mother and sister were very much alive. It’s a risky thing to do. I think there’s guilt involved in putting your family nakedly up on the stage.

Also, you’re beginning by going to the heart of things. You may be giving yourself a hard act to follow. What’s amazing is that he outdid himself. Menagerie was almost immediately recognized as a major event in American drama. Rather than being intimidated by that, he then produced an even better play. I decided to avoid undisguised autobiography as much as I possibly can because of a sense I had that this could be very sticky business. I think there are consequences to making art too directly out of your own life.

You’ve said in the past that Tennessee Williams is “all-in-all my favorite playwright and all-in-all our greatest playwright.” Can you elaborate on this?

I don’t know that that’s true anymore in terms of him being my favorite. I don’t have a favorite playwright. I wish I had never said the greatest this or greatest that.

One thing I’m interested in that I’ve been thinking about is the shape of a playwright’s body of work. O’Neill has a perfectly shaped body of work because the plays get better and better.

Williams’s career is another story. He wrote a string of masterpieces that changed American theater and shaped American consciousness. Then around the time of Night of the Iguana, it seems to me they sort of stopped working. His later plays feel frantic. They feel like there’s an attempt to dig into experimental traditions that are not comfortable. That’s a very harsh assessment. He was a great writer, and it’s possible that people will figure out ways to make those plays work. Recently there’s been a spate of revivals of those later plays. I’m thrilled people are trying to wrestle with them, but are they salvageable? I don’t really know. That will make a lot of people very angry with me. I’d love to be proven wrong.

John Lahr has said that you deal with fame in a way that Williams didn’t. Lahr said: “Williams just ran from it, whereas Tony really tries to sort of put his head down and crash through it to some other place.”

Tennessee wrote an essay called “On a Streetcar Named Success” about his life right after The Glass Menagerie became a huge hit. He describes this disintegration that he resolved by having an eye operation. I’m sure when people read it then, they worried what would happen to this guy.

I don’t criticize anybody for the way they handle success. Needing and wanting success is part of the deal of being a playwright, and also not losing your sense of what you’re writing for, what you hope your writing will accomplish, and what you hope you’ll discover through your writing. If what you’re hoping to discover is that you’re the best writer around, if your main ambition is to win 16 Pulitzers and an Oscar, then I think it’ll start to sound that way in your work and you’ll be worthless to everybody, including yourself.

What do you think is Williams’s legacy for today’s playwrights?

I think that the way you learn how to be a playwright is by studying plays. I think that’s more valuable ultimately than being in a graduate program and sitting around and having other playwrights tell you what you’re doing wrong. If anybody asks me what to do to become a playwright, I say read every play ever written, or as many of them as you can get through.

I think the lessons of those plays are very potent for writers. They’re social plays. They’re not plays that are completely interior. There are ways in which A Streetcar Named Desire is timeless, and there are also ways in which it’s very much a play of the post-war era, about women’s economic insecurity. That sounds reductive and silly, but it’s not. Blanche’s desperation is the terror of somebody who has absolutely no possibility because of what she’s suffered and flaws in her character, if you can call them flaws. There are also beautiful things in her character: her emotional warmth, her carnality, her sensuality. These have all been turned into negatives by a society that’s this creepy mix of post-war boosterism and old-south aristocratic decrepitude and decline. She’s been ground to a pulp. Same with Amanda Wingfield or Laura or Alma Winemiller or Maggie the Cat. He’s especially brilliant at showing what women do when faced with intractably unfair, unjust, and unendurable circumstance. The plotting, contriving, scheming, fighting, and even the self-destruction. I think that they’re plays about oppression and the struggle against it. Even if he’s not an overtly political playwright, he’s profitable to look at in terms of how to handle questions we’d ordinarily call political questions within the tradition of stage realism.

This interview has been condensed and edited.