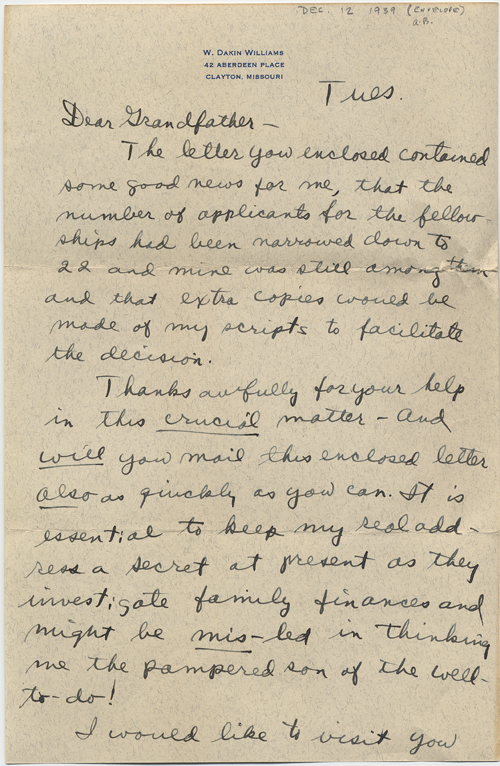 In 1938, Tennessee Williams entered Candles to the Sun in a competition sponsored by the Dramatists Guild in New York City. Williams wrote Candles to the Sun, a play about striking coal miners and the powerlessness of the individual against the collective consciousness, at a time when his sister Rose’s mental health was rapidly deteriorating. His work was singled out as having a “pronounced” individual style but was not selected for an award.

Williams was keen to present himself to the Guild as more poverty-stricken than he was. Worried that the Guild would investigate his family’s finances if they knew his real address, Williams asked his grandfather to mail the application letter from Memphis rather than St. Louis. The letter can be seen in the current exhibition, Becoming Tennessee Williams, on display through July 31 at the Ransom Center.

Williams’s relationship with his maternal grandparents, Reverend Walter Edwin Dakin and Rosina Otte Dakin, in many ways proved more stable and supportive than his relationship with his own parents. During the first years of his life, while his father traveled for business, Williams lived at his grandparents’ home in Mississippi. As a result of his father’s absence, his grandfather came to play the role of surrogate father, one that he would never really give up. Even after the family moved to St. Louis, Williams remained close to his grandparents, writing to and visiting them frequently. He grew to resent St. Louis and wished he could spend all his time in his grandparents’ happier home in Mississippi.

In 1940 the Guild awarded him $1,000, which allowed him to return to New York and attend a playwriting seminar taught by the renowned professor and critic John Gassner (1903–1967), whose archive is also at the Ransom Center.