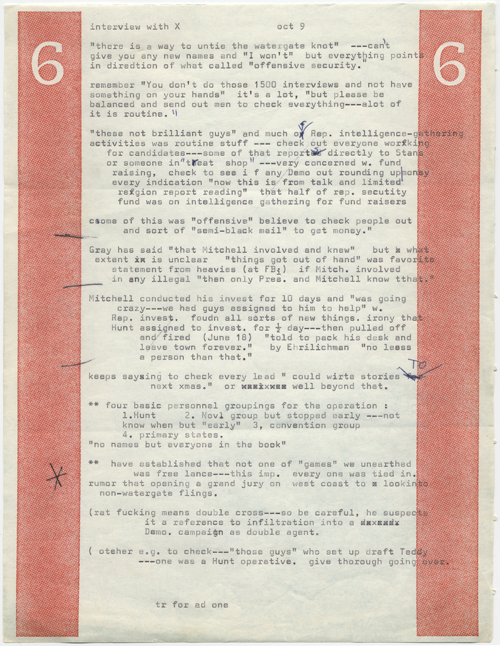 Between 1972 and 1976, Bob Woodward and Carl Bernstein broke one of the biggest stories in American politics. Beginning with their investigation of a burglary at the Democratic National Committee headquarters in the Watergate complex, Woodward and Bernstein uncovered a series of crimes that eventually led to the indictments of 40 White House and administration officials and ultimately to the resignation of President Richard Nixon. While reporting on the scandal for The Washington Post and for their subsequent books, Woodward and Bernstein kept all of their notes and drafts. The result is a meticulous record of the Watergate scandal from beginning to end, providing a behind-the-scenes perspective into the nature of investigative journalism, the American political process, and the Nixon presidency.

Bob Woodward’s secret source about the Watergate scandal, famously referred to by the reporters and their editors as “Deep Throat,” was identified as FBI Associate Director Mark Felt in 2005.

In his typed notes from an early morning parking garage meeting on October 9, 1972, Woodward simply refers to the exchange with Felt as “interview with x.” These notes can be seen in the Ransom Center’s current exhibition Culture Unbound: Collecting in the Twenty-First Century, on display through July 31.

Woodward’s notes with Felt were used for the October 10, 1974 Washington Post story that exposed the Watergate burglary as part of a larger plan. The notes, marked up with spelling corrections and asterisks, quote Felt saying, “no names but everyone in the book.”

Soon after winning the Pulitzer Prize for their reporting in May 1973, Woodward and Bernstein signed a contract with Simon and Schuster to write a book about Watergate. Working nights and weekends while still covering the scandal for The Washington Post, the reporters tried several approaches, including telling the story from the burglars’ perspective. In an early outline of the book, the reporters briefly describe a day in the life of many of the major conspirators. Eventually Woodward and Bernstein decided to tell the story of their own investigation of the break-in and cover-up.