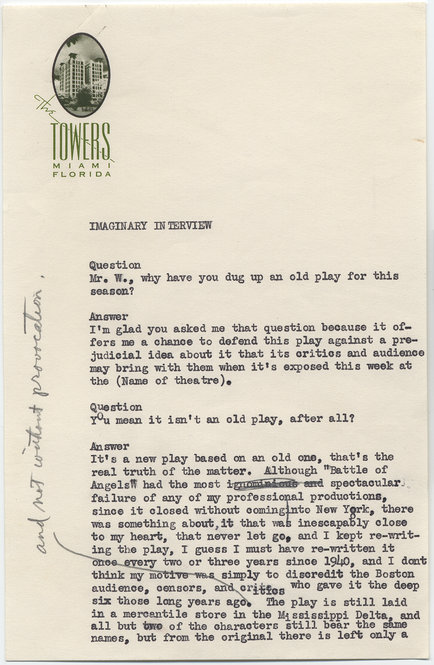 The first major production of a Tennessee Williams play, Battle of Angels (1940), was a complete failure and scandal. The play was poorly received; one critic compared watching the play to being “dunked in mire.” Boston City Council members called for the play to be censored, and it ran for less than two weeks there. As Williams biographer Robert Bray wrote, “the haphazard decision to move the opening from New Haven to Boston in December of 1940 left Williams faced with a priggish audience unprepared to entertain his juxtaposition of sexual and religious themes.”

At the production’s end, Williams left Boston with the intention of finding a quiet place to recuperate. In a letter to his friend, Joe Hazan, Williams writes that he is sickened by the failure of his play, laments that the audience could not recognize the “poetic tragedy” of his work, and calls the critics who reviewed the production second-string “prissy old maids.”

After its failed Boston debut, Williams continuously revised and rewrote Battle of Angels with the hope that the play would be reproduced. He confesses in an “Imaginary Interview” with himself, “there was something about it that was inescapably close to my heart, that never let go, and I kept re-writing the play, I guess I must have re-written it once every two or three years since 1940.” The play embodied a theme central to his writing—“a prayer for the Wild at Heart Kept in Cages.” The play eventually reemerged some 16 years later, transfigured as Orpheus Descending (1957).

In Williams’s tongue and cheek “Imaginary Interview” Williams, the interviewer, struggles to get a straight answer from Williams, the playwright, about the theme of Battle of Angles:

I still wish you would tel [sic] what it’s a prayer for, this play.”

Williams, playwright, finally answers Williams, interviewer, that the prayer is for “More tolerance and respect for the wild and lyric impulses that the human heart feels and so often is forced to repress in order to avoid social censure and worse.”

Williams was the “primitive poet” of Battle; his prayer for the “Wild at Heart” was one against censorship and for artistic appreciation. He asserted that his work dealt with the “wild at heart kept in cages:” those who struggled against conventions, relationships, expectations, or prejudices that at the very least tamed them and at the worst crushed them beyond recognition.

This typed interview can be seen in the current exhibition, Becoming Tennessee Williams, on display through July 31.