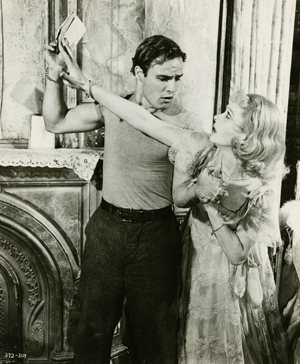 The Harry Ransom Center kicks off the Tennessee Williams Film Series tonight with Elia Kazan’s A Streetcar Named Desire (1951), starring Marlon Brando and Vivien Leigh. The series runs on some Thursdays through July 21 and features films highlighted in the current exhibition, Becoming Tennessee Williams, which runs through July 31.

In the story, Blanche DuBois (Leigh) moves in with her sister in New Orleans and is tormented by her brutish brother-in-law (Brando) while her reality crumbles around her.

British actress Vivien Leigh was the only leading member of the screen cast not originally in the 1947 Broadway production of the play. Leigh was given the movie role because the film’s producers felt Leigh had more box office appeal than Jessica Tandy, largely for her Oscar-winning performance as Scarlett O’Hara in 1939’s Gone With the Wind.

Leigh’s performance earned positive reviews from critics. Bosley Crowther of The New York Times called it “haunting,” adding that “Miss Leigh accomplishes more than a worthy repeat of the performance which Jessica Tandy gave on the stage…Blessed with a beautifully molded and fluently expressive face, a pair of eyes that can flood with emotion, and a body that moves with spirit and style, Miss Leigh has, indeed, created a new Blanche Du Bois on the screen—a woman of even greater fullness, torment, and tragedy.”

Later, Leigh, who suffered from bipolar disorder for much of her life, would claim that the part was responsible for her illness following the film’s production. She was hospitalized multiple times and treated with electroshock therapy.

This post was written by Ransom Center volunteer Emily Butts.