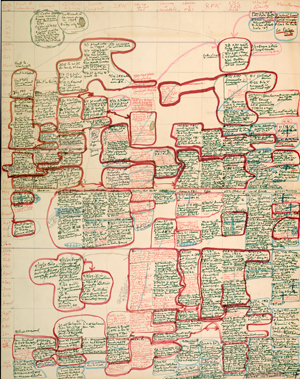 Norman Mailer was among the most prominent cultural and literary figures in late twentieth-century America. His talent as a writer was apparent early in his career; he received a Pulitzer Prize nomination for his debut novel, The Naked and the Dead, which was published in 1948 when he was only 25 years old. In the 1950s Mailer began publishing commentary about such topics as race, feminism, sexuality, politics, literature, art, culture, and society, in magazines including Dissent, Esquire, Partisan Review, and The Village Voice, which he co-founded in 1955.

Norman Mailer’s 1991 novel, Harlot’s Ghost, is a sprawling, 1,300-page chronicle of the Central Intelligence Agency that blends both fictional and factual characters and events.

On a detailed timeline of the novel, Mailer charts world events and various characters’ activities over more than five years. Mailer created a systematic grid; dates on the left side chronicle the events of various subject headings that run across the top of the chart, including Hunt & Cuban Exiles, JFK, and Judith Campbell. The timeline is covered in pencil and black, red, green, and blue ink.

The chart can be seen in the current exhibition Culture Unbound: Collecting in the Twenty-First Century, on display through July 31.

Mailer remained a prolific writer and cultural commentator throughout his long and colorful career. The Ransom Center acquired Mailer’s archive, which fills more than 1,000 archival boxes and makes it the Ransom Center’s largest single-author collection, in 2005.