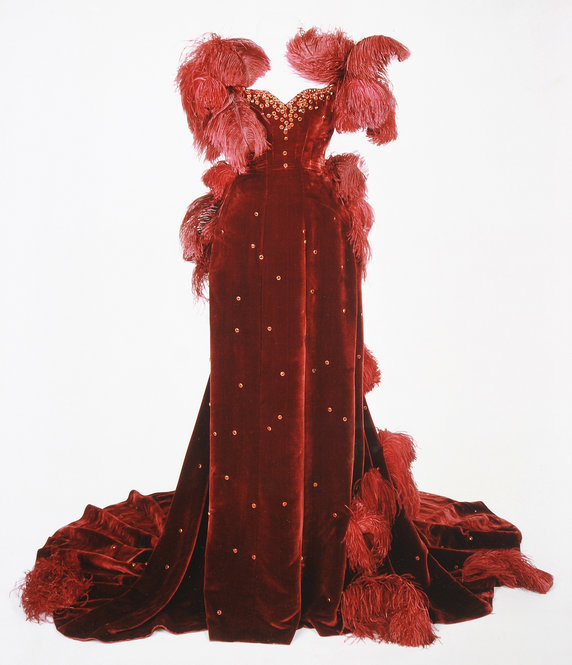 “Wear that!” spits Rhett Butler, throwing a burgundy ball gown at Scarlett. “Nothing modest or matronly will do for this occasion.”

When the provocative burgundy gown from Gone With The Wind arrived at the Ransom Center in the early 1980s, lead weights lining the back hem had torn parts of the dress. Cara Varnell, a conservator specializing in Hollywood film costumes who is currently conserving the Ransom Center’s five Gone With The Wind dresses, explains that the weights are an example of inherent vice: the studio costume department included the weights to make the dress hang and move properly, but over time the weights ended up tearing parts of the dress. To prevent further damage, Varnell and the conservation team decided that the weights had to go.

“This girl’s never dancing again, so the dress doesn’t need to train properly,” Varnell said. “But what we do care about is that it’s pulling on the center of the dress. Dress weights are very common, and, while I don’t approach it casually, I often remove the weights in most of the couture dresses I work with because they’re usually pulling on the fabric.”

To remove the weights, the team enlisted the help of three Costume Studies master’s degree students at New York University: Lauren Lappin, Jennifer Moss, and Laura Winslow. Before removing the weights, the students worked with Ransom Center Book Conservator Mary Baughman to create compartments for storing the weights. They used one machine to heat seal the edges of two strips of transparent polyester film, and they used an ultrasonic machine to separate the strips into individual compartments. They then labeled the compartments with each weight’s location on the gown’s hem.

After devising compartments, removing the weights, and placing the removed weights in their designated compartments, the conservation team helped the burgundy ball gown lose some weight.