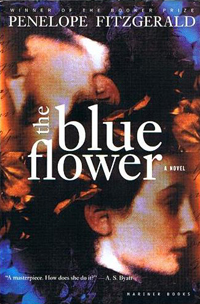 Philip Christensen, College Associate Dean for Curriculum Development at Suffolk County Community College, maintained a seven-year correspondence with novelist Penelope Fitzgerald, whose archive is housed at the Ransom Center. Christensen recently donated the letters from their correspondence to the Ransom Center, and in this essay, he shares some of the contents of those exchanges.

Email and social media appear virtually spontaneous, and yet, as Robert McCrum conceded in a recent blog on The Guardian’s website, “a physical correspondence, an exchange of missives, in envelopes, carries more freight than a high speed email.” In 1993, I mailed a letter to British novelist Penelope Fitzgerald, care of her publisher, asking if she would read my paper on her uncle Ronald Knox, the once renowned Catholic apologist best remembered today for his “Detective Story Decalogue.” To my surprise, she wrote back, thus beginning a literary correspondence that came to a close, in April 2000, when I received an email, with the subject “Condolences” and a link to her obituary in The New York Times. (Terence Dooley, Fitzgerald’s literary executor and the editor of So I Have Thought of You: the Letters of Penelope Fitzgerald, and Hermione Lee, Fitzgerald’s biographer, have kindly given permission to quote from these unpublished letters.)

Fitzgerald corresponded in aerogrammes, those blue papers that fold into their own airmail envelopes, and I recall opening each with surgical precision, for fear of excising her graceful marginalia, in italic hand, along the folds. Surely, Fitzgerald must have found my typescripts diffident and rehearsed, but she never hinted at any disparity, and, after an initial “Penelope Fitzgerald,” she signed her letters “Penelope.”

Penelope, a former tutor, regarded teaching as “some of the hardest work on earth.” Her lessons must have been memorably aphoristic. Of Hamlet’s “undiscovered country,” she wrote: “it is a difficult subject, I think, as poor Hamlet must have felt that one traveller at least returned too often,” or, regarding the challenge of understanding the Duke in Measure for Measure: “he does break into octosyllabics at one point, & Shakespeare usually keeps them for actors with magic power.” She agreed that Let Dons Delight was Uncle Ronnie’s best book, and added that his invention of fictional disputations at an imaginary Oxford college, from 1588 to 1938, “carries imitation of the past to the point of second sights.”  When I made a passing reference to Vladimir and Estragon as modern pilgrims, she chided: “Surely, there are no ‘pilgrims’ in Waiting for Godot. Productions over here usually show Vladimir & Estragon as tramps, but as a matter of fact they are clowns, whose relationship to society is quite different.”

Penelope was philosophical about her late celebrity, writing that her reputation “is up now, but it will go down” and, within the context of her short story “The Red Haired Girl,” encouraged me not to give up: “it’s certainly never too late to be a writer.” She was also open about discussing her own work. In one letter, she described laying the foundation, almost literally, of a fictitious college in The Gate of Angels: “I walked all round Cambridge to find a spare piece of ground where another ancient college—a small one—could have been built.” She also commended one of my students for her essay on the same novel: “The references to divine providence I thought were very good because I didn’t mention it in the book but left it to be understood by discerning readers.”

Penelope, who thought her novels too British for Americans, was impressed by their sheer energy. When I wrote about a possible move from New York to Jackson, Mississippi, she replied, “Americans think nothing of tremendous moves, they just pack everything in the car and drive away.” She was also stirred by their good will. In reminiscences years after her visit to the Harry Ransom Center, which had purchased selections of her papers, her memory of nagging financial worries is assuaged by the kindnesses of the university staff: “I went to consult something in the University library, and had to manage on 2 dollars a day, but it was quite possible, if you just had breakfast, and I’ll never forget the patience & courtesy with which I was treated at the Humanities Library.”

As her American readership began to grow, Penelope gave all the credit to Houghton Mifflin, her new American publisher. American publication of The Blue Flower in April 1997 resulted in its wider recognition, including the cover page of The New York Times Book Review and in 1998, the first year of eligibility for non-American writers, the National Book Critics Circle Award for fiction. In a letter written shortly thereafter, she so typically deflected the spotlight from herself and onto Christopher Carduff, her American editor: “It was a great encouragement for my wonderful book editor at Houghton Mifflin, who flew to New York with a ready-written speech in his pocket just in case it was necessary, and, lo and behold, it was.”

Twice, Penelope was selected as a judge for the Man Booker Prize, which her novel Offshore received in 1979. Shortly after her second Booker stint, in 1998, she wrote about the weariness following this task: “I have to admit that I’m glad the Booker is over—it’s bad enough having to judge it, but worse still, during the dinner an alternative panel of judges is broadcasting from a cellar beneath your feet and contradicting everything you say.”

Penelope often reflected on “time’s fell hand,” for instance in her memories of The Sole Bay Bookshop, in Southwold, and the inspiration of her second novel, which “has now alas closed its doors.” She was relieved that her father Edmund George Valpy (“Evoe”) Knox, editor of Punch for nearly two decades (1932 to 1949), “didn’t live to see the disappearance of Punch, which would once have seemed hardly believable” or that her Uncle Ronnie, whose unecumenism appeared hopelessly out of place after Vatican II, can be judged, “like the rest of us, only in terms of the time he lived in.” One Advent, she abruptly closed with wishes haunted by the recent death of her brother Rawle: “I’m lucky to be with my family this Christmas, although I was very sad to lose my brother this year. He was an old man & I’m getting to be an old woman,” and, elsewhere, her perfect balance of concession and grace is faultless in her observation of grandchildren at play: “I haven’t been so well lately, but hearing my grandchildren play football (handicapped by the kitten) in the garden just outside my window made me feel better.”

To this day, one of Penelope’s letters remains undelivered, “a catastrophe” she blamed on the “confused postal service.” I remain hopeful this letter, retrieved from some untidy corner at the Royal Mail, will one day miraculously appear, evidence of what the editors of her selected essays confidently call The Afterlife (2000). Penelope once wrote, regarding the Old Vic: “We can only hope it keeps going,” a sentiment she playfully applied to herself. This reminiscence is dedicated to her, with the hope that this conversation will “keep going” for a long time.