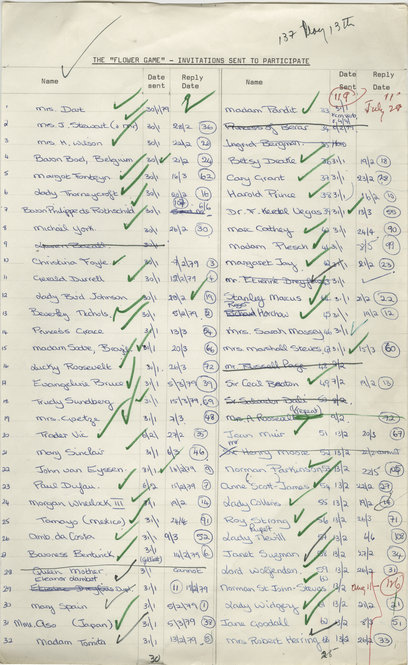 The personal archive of publisher, author, and artist Fleur Cowles (1908–2009) has been donated to the Ransom Center. The materials will be accessible once processed and cataloged, but an initial assessment confirms that the archive is as dynamic as Cowles was herself.

In 1983, Cowles celebrated the publication of The Flower Game, a book that shared hundreds of responses from friends around the world, all answering the question of what ten flowers they would like to take to a lonely island, assuming anything would grow there.

When soliciting friends, Cowles wrote, “The replies will determine the best loved flowers everywhere (I am writing to many places around the world).”

Participants ranged from European to Hollywood royalty, proving that Cowles didn’t limit herself to a continent nor to small social circles. A detailed chart documents the progress of Cowles’s initiative, revealing the friends invited to participate and the dates for solicitation and receipt.

Just as these responses provide insight into Cowles’s broad personal and professional network, the hundreds of typed and handwritten, signed responses represent just a small fraction of the correspondence found in the archive.

Below are highlights from a handful of the participants.

Cecil Beaton:
Photographer Beaton provided not only his list of flowers but also a handwritten note stating “Any large white orchid of any variety, as long as it is white.”

Candice Bergen:
Actress Bergen’s list included wisteria and night-blooming jasmine, and she elaborated on her selections: “Flowers to see and smell—by day and night—that bloom underfoot and hang overhead, plus a few insect escorts—butterflies and caterpillars, the odd ladybug—for company.”
November 28, 1981

Douglas Fairbanks:
Actor Fairbanks’s list includes a reference to his trademark carnation. Topping his list at number one is “The dark red (or Harvard red) carnation, as I have worn one in my button-hole actually since I have had a button-hole.”
March 6, 1979

Princess Grace of Monaco:
Listed among her favorite flowers, Princess Grace included bamboo, noting, “I hope you will accept bamboo although I have never seen it flower.”
March 7, 1979

Lady Bird Johnson:
Former First Lady “Lady Bird” Johnson touted resilient flowers, claiming “Since I am an intensely practical person, I would choose flowers which give the most results for the least work and Zinnias and Marigolds and white Daisies would have to be on my list of favorite flowers. In my lifetime experience, I have found them to be so hardy and they give a great profusion of color over long weeks—I’ve always saluted their generosity!”
February 8, 1979

Laurence Olivier:
Actor Olivier’s list focused on roses. He wrote, “At the moment my gardening mind is filled with roses, so let me offer you a dozen of these.” Some of the varieties included Papa Meilland, Panorama Holiday (an exquisite pink, commonly named Beautiful Flower) and Blue Moon.
August 10, 1981

Liz Smith:
Journalist Smith, a native Texan, elaborated on her list, “But my favorites, the ones I would have to have, are the lovelies—the wildflowers of Texas: Bluebonnets, winecups, Indian paintbrush, wild daisies, wild poppies—a collage of color and nostalgia.”
June 10, 1980

Rufino Tamayo:
Among some of the Mexican artist’s favorites, Tamayo includes the calla lily, hibiscus, and the yucca.
April 3, 1979