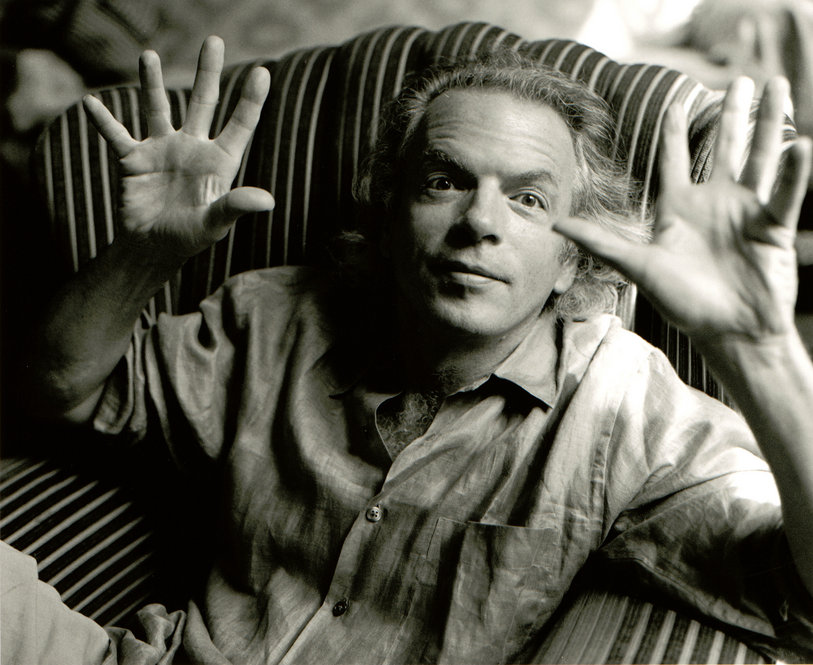 Who was Spalding Gray?

Fans have debated this question for years, as Gray was a pioneer in blurring the line between real life and theater in his autobiographical and often very personal monologues. He left audiences wondering how much of the stage persona was the real Gray and how much was Gray the performer.

Photographer Ann Rhoney captured the real Spalding Gray at home in his Wooster Street loft in New York City on an August day in 1990. He wasn’t wearing his usual plaid shirt. He wasn’t sitting behind a desk with a notebook and props. He was sitting comfortably at home in his grandmother’s chair and having a conversation with a new friend.

Rhoney splits her time between New York and the West Coast, and after a photo shoot in San Francisco the previous day, she took a red-eye flight to New York City to meet Gray and photograph him for a portrait assignment related to his forthcoming monologue Monster in a Box.

She described Gray as affable but somewhat meek and reserved when she arrived. He was wearing a shirt with a color somewhere between green and gold. “He may have pressed it himself,” Rhoney notes. “He appeared to be rather dressed up for that hour of the morning.”

As she started chatting with him and asking questions to try to get him to relax and open up for the session, he told her about the piece he was working on—a monologue that would become Gray’s Anatomy, which chronicled Gray’s medical problems with his eyes.

“Then all of the sudden, he started going into character, in a way,” Rhoney noticed. “That’s when a great moment happened.”

Gray dramatically described going to a medicine man in Niagara Falls to seek treatment for his eyes, as if he wanted to impress his new audience. Rhoney’s uncharacteristically blunt response?

Rhoney describes Gray’s shock at her response: “His eyes opened in wide surprise and bewilderment. He jumped back, as if ‘What are you saying to me?'”

Then Rhoney explained that she was born and raised in Niagara Falls with a familial heritage of a funeral home in close proximity to an Indian reservation.

The ice had been broken, and from then on, Rhoney had Gray’s full attention. Gray peppered her with questions as she did her light meter readings and prepared for the shoot, loading her Hasselblad camera.

Conversation flowed, and the result was 271 frames of Gray in what Rhoney says is, essentially, a still-life movie. “It’s a portrait of a soul with a range of every human emotion in this session of 15 rolls.”

“To get a successful portrait, you have to enter into an honest exchange with the person so that their spirit, their personal landscape emerges. You have to put them at ease and put yourself in their place.”

Rhoney spoke about how people are unable to see themselves, but once in a while—”every once in a blue moon”—a person can look at a photograph and recognize oneself.

“I always try to get that photograph where the person will say, ‘That’s me,'” she said.

The Ransom Center recently acquired two images from that session, one with an animated Gray using his hands for full effect and a second, quieter image of Gray midthought. Gray’s archive resides at the Ransom Center and recently opened for research.

“He completely offered me and my camera—even though at times he thought the camera got in the way of the conversation—an honest openness throughout the session,” she said. “He moved differently than he did on stage. It was as if I had a private performance. Yet it was not a performance at all. He was giving me his spirit.”

As Rhoney studied the images, she kept coming back to the hands in the first image. Though she’s looked at the photo hundreds of times, she made yet another discovery.

“Think about a palm reader, and if you look at the palm on his left, how poignant and beautiful that is. It’s as if he left us with his hand imprint,” she said. After a pause, she continued, “Especially the left palm. The detail on that? If everyone wants a road map to Spalding, there it is.”

As Rhoney studied the second image, she thought more about how he interacted with audiences.

“There’s a stillness. Yet you can see his thought process in motion,” she said.”We know him as talking to an audience, but I believe when he talked to the audience, he talked to everyone individually, even though he couldn’t see their faces. There’s something about this image where he’s talking to me behind the camera. That’s how he really, truly regarded his audiences—as a collective whole of individuals.”

The Gray archive contains no photos, so Rhoney’s portraits give scholars an additional lens through which to view Gray and his work.

“I’d like the photos to be a window into who he was,” Rhoney said. “Hopefully, this leads the scholars into seeing him with fresh eyes. As a photographer, I feel lucky to show him in a form of reality. This is who he was and is. A photograph is the truth and a scholarly document at its finest.”

Rhoney said this photo session led to a strong friendship, and Gray often told her how much he loved the photograph with the hand detail Rhoney loved. As she studied her photos and her contact sheets, she laughed often as she recalled details from the shoot and their conversation.

“The man can really still, in his own way, jump off the contact sheet and make one laugh,” she said. “He’s not here anymore, but they leave us with a whisper, an echo of who he is.”