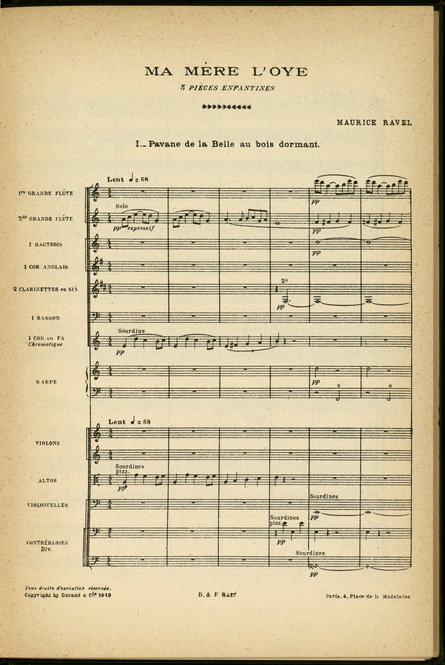 While studying the 1911 manuscript of Maurice Ravel’s “Mother Goose” ballet suite, housed at the Ransom Center, scholar Arbie Orenstein discovered the largest error in all of Ravel’s scores: a bassoon line that’s been missing from the published edition for the last century.

Orenstein’s discovery comes just in time for the centennial of “Mother Goose,” which premiered in Paris 100 years ago this Saturday.

“The first time I looked at that bassoon part, I thought, ‘What on earth is this instrument doing here?’” Orenstein told Cultural Compass. “But it’s perfectly written, complete with dynamics and phrasing, and it makes absolute sense according to all the rules of orchestration. I said, ‘Wow, this is really something.’”

In addition to the bassoon line, Orenstein, Professor of Music at Queens College, found other discrepancies between the 1911 manuscript and the widely used 1912 published score. Orenstein plans to publish a new edition this year presenting all of the differences between the manuscript and the published score. Philadelphia Orchestra librarian Clinton F. Nieweg will help communicate the changes to orchestras around the world.

While preparing the new edition, Orenstein consulted with musicians from the New York Philharmonic, and the Philharmonic became the first orchestra to incorporate Orenstein’s changes in a concert on December 28, 2011.

“It was quite exciting to hear that bassoon part for the first time in 100 years (not that I’m 100 years old!),” Orenstein wrote in an e-mail after the performance.

Though the “Mother Goose” manuscript contains more errors than any other manuscript he’s ever worked with, Orenstein says he doesn’t criticize Ravel. Ravel had his mind on the new ballet he’d already begun composing, “Daphnis et Chloë,” the manuscript of which is also housed at the Ransom Center. On top of that, Stravinsky was composing what would become his seminal ballet “The Rite of Spring” and playing it for Ravel.

“All of these exciting things are happening. He just may not have given his fullest attention to ‘Mother Goose,’” Orenstein said. “It’s a battle for perfection which you can never win. Ravel said the same thing: ‘My goal is technical perfection. I can strive unceasingly, but I know I’ll never be able to achieve it.’”

Nevertheless, Orenstein is doing what he can to help Ravel achieve perfection posthumously.

“The greatest battle of any composer is that of wrong notes. That’s why these new editions based on the manuscripts are so important. If you’re going to interpret the music, you have to do what Mahler said: read between the notes. But you have to have all the right notes.”

Working with music publisher Ernst Eulenburg Ltd., Orenstein plans to continue publishing new editions of Ravel’s major orchestral works, some of which are housed at the Ransom Center.

“The point of departure is the Harry Ransom Center. Without that, we wouldn’t be able to do this,” Orenstein said. “There’s a tremendous amount that needs to be looked at, sorted out, and new editions made. There will be plenty more coming out of Texas, I can tell you that.”