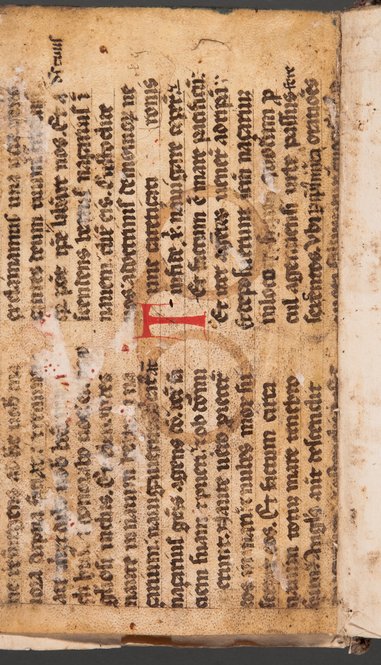 Many scholars rank the invention of eyeglasses among the most important contributions to humankind in the last 2,000 years. Yet, the inventor of this now thoroughly quotidian piece of technology remains anonymous. Indeed the inventor (or inventors) will almost certainly never be known, given the numerous conflicting claims, lack of specificity, and scarcity of surviving documentation.

What scholars do know about the history of eyeglasses is that they were probably invented at the end of the thirteenth century by a craftsman living near Pisa. The evidence originates from a passage by Friar Giordano da Pisa who recounts having met the anonymous craftsman in 1286. A friend of Giordano named Friar Allesandro della Spina learned how to make them shortly thereafter and shared the secret with the public. A number of other possible inventors of eyeglasses have been posited over the centuries, all of which have finally been proven spurious in recent scholarship.1

During the early period of the production of eyeglasses, they were referred to as vitreos ab oculis ad legendum (eyeglasses for eyes for reading) and oglarios de vitro (spectacles with glass lenses). Eventually these rather clunky terms were shortened to occhiali and ocularia. Either way, the evidence indicates that spectacles were probably invented in Italy at the end of the thirteenth century, and by the early fourteenth century, they were being produced and sold in Venice.

Scholars believe that by the end of the fifteenth century, spectacles were probably being sold and produced throughout most of Europe, with countries like England importing them by the thousands. Florence led the way in manufacturing and apparently produced some of the highest quality spectacles. Despite this widespread production, there are relatively few surviving specimens. Indeed, although Florence was known to be a major producer, archeologists have found only one pair of rivet spectacles in that city.

It is with this in mind that it becomes all the more significant to find evidence of a pair of medieval spectacles anywhere at all. One can imagine why the recent discovery of what appears to be an impression of a pair of medieval rivet spectacles in one of the Ransom Center’s early printed books was cause for excitement. While conducting a survey of manuscript waste found in early printed books I noticed a faint reddish-brown impression of a pair of spectacles on the rear parchment endpapers of a copy of the Opera of Fr. Luigi di Granata. The endpapers in this book comprise a piece of parchment taken from a page in a medieval manuscript (it was a common practice in the hand-press period to reuse old disbound parchment manuscripts for endpapers, pastedowns, stubbs, or spine linings).

A discovery like this is fairly uncommon. Among the many thousands of medieval manuscripts and early printed books in U.S. libraries, only a handful of similar discoveries have been made: a pair of spectacles found in the Folger copy 46 of the First Folio at the Folger Shakespeare Library; the outline of a pair spectacles carved into the wooden boards of a sixteenth-century volume in the rare books department at Catholic University of America and in a fifthteenth-century Breviary at the Fribourg, Bibliothèque Cantonale et Universitaire (seen in Christopher De Hamel’s History of Illuminated Manuscripts, fig. 193); and an impression in a manuscript at the Walters Art Museum. One medieval scholar who has conducted a survey of more than 3,000 manuscripts in the United States informed me that he had encountered only one such example.

The earliest spectacles comprised two convex glass disks enclosed in metal or bone rims with handles centrally connected by a rivet and could either clamp onto the nostrils or be held before the eyes. Later specimens had wire and even leather rims. We know this not only from surviving examples but also from artistic depictions. A painter from northern Italy working in 1352 provides us with the first depiction of spectacles. It appears in a fresco that adorns the Chapter House of a Dominican monastery in Treviso, Italy. The Cardinal Hugh of St. Cher can be seen hard at work in his study with quill, parchment, and a pair of early spectacles on his nose. St. Jerome, the famous scholar-saint and translator of the Latin Bible, also was frequently depicted wearing spectacles in his study.

Advanced scientific methods for dating aside, we can get a good estimate of the age of the eyeglasses that left the impression on the parchment by first examining the script on the parchment (to establish the earliest possible date) and then by looking at the shape of the impression itself. The text is what is known as Southern Textualis or Rotunda. Southern Textualis was popular in Italy and Southern Europe between the late 1200s and the late 1400s. Alternately, the 1568 publication of the printed text provides us with a possible later date. Regardless, the spectacles conform to the physical features and rough time period for early medieval leather-framed spectacles.* But dare we hope for more? Because the book was printed in Venice, Italy, the tantalizing possibility exists that the wearer who deposited his spectacles in between the parchment leaves may have been using a pair of the earliest eyeglasses ever made, because Florence, where eyeglasses were invented, is less than 165 miles from Venice. Although we may never know exactly how (or when) these spectacles left their mark on the parchment, their faint impressions nevertheless offer an intriguing glimpse into the early history this important invention.

1This topic, and the history of spectacles in general, is thoroughly summarized in Vincent Ilardi’s Renaissance Vision from Spectacles to Telescopes (Philadelphia, PA: American Philosophical Society, 2007).

Image: Rear flyleaf: It’s difficult to tell exactly how the spectacles left their impression, but they must have been sandwiched between the two parchment endleaves for an extended period of time. Photo by Pete Smith.