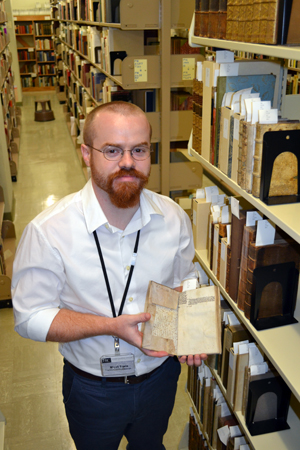 Because manuscript waste is particularly difficult to identify due to its fragmentary nature, I started early on to think of ways to harness the knowledge of other rare book and manuscript enthusiasts to help describe these objects. Inspired by individuals who had made extraordinary discoveries about historical photographs by sharing them on the popular image-hosting site Flickr, I hoped that something similar could be done with images of medieval manuscript waste. This served as the inspiration for posting quick, point-and-shoot digital camera images on Flickr and inviting members of the rare book community to examine and share insights they might have about the items.

The response has been promising. Out of the 65 images (from about 40 items) posted thus far, we’ve had a total of 2,422 views, 26 comments and–thanks to the work of some very diligent people–more than 16 partial or full identifications of the fragmentary texts. This page is a great example of how users have offered up expertise on transcribing and dating one fragment. It’s likely that a majority of all known fragments in our collections will have been identified by Flickr members by the time this project is complete. Notifications about new images are posted on a related Facebook page. But plenty of work remains, and there are many fragments to be commented on.

Crowdsourcing is a popular buzzword these days and for good reason. By placing images of these rather obscure, archaic objects on a popular image hosting site, a twenty-first-century technology brings together the skills of a highly specialized and niche community and opens up these medieval objects to interpretation by potentially anyone.

* The author would like to add that although digitization and image sharing has many benefits, nothing compares with up close physical examination of medieval manuscripts. It should also be noted that the images we are posting are primarily for identification and rapid dissemination and are not publication-quality, high-resolution photos. Researchers may request high-resolution images through the Ransom Center’s website.