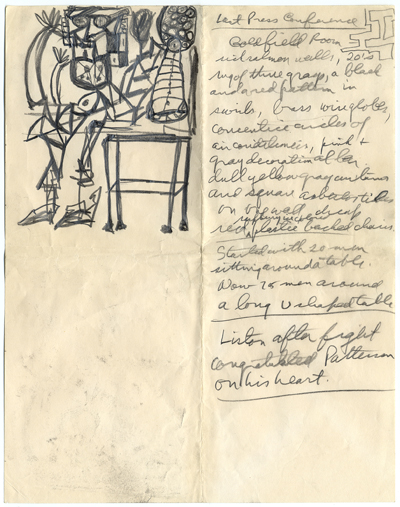 In Chicago in the fall of 1962, heavyweight champion Floyd Patterson squared up to face Sonny Liston, also known as “The Bear,” in a monumental fight. Liston, a former convict with ties to organized crime, seemed the opposite of the ambivalent and introspective Patterson, who was known to help an opponent mid-round to find a misplaced mouthpiece. Against the advice of his famed trainer, Constantine “Cus” D’Amato, Patterson agreed to confront Liston in the ring, only to be defeated in less than three minutes. Liston knocked out Patterson again the following July in Las Vegas.

The 1962 title bout against Liston in Chicago, a milestone in Patterson’s life and career, attracted hundreds of reporters. Norman Mailer was among the writers who traveled to Chicago to observe the event. Mailer, who trained as a boxer at Patterson’s gym, used boxing as a major motif in his work and was a lifelong fan of the sport. Out of the Patterson-Liston matchup, Mailer produced an important essay about boxing, “Ten Thousand Words a Minute” for Esquire, a piece that became a cornerstone in Mailer’s book The Presidential Papers (1963).

In his 2012 book, Floyd Patterson: The Fighting Life of Boxing’s Invisible Champion (Houghton Mifflin Harcourt), author W. K. Stratton draws from the Norman Mailer papers at the Ransom Center to share a portrait of Patterson’s boxing career. Mailer, who recognized the symbolic importance of Patterson’s confrontation with Liston, kept press kits and materials from both Liston fights. In addition to examining these materials, Stratton quotes Mailer’s handwritten notes about his interest in boxing.

Other boxing materials from Norman Mailer’s papers will be on display in The Ransom Center’s exhibition Literature and Sport, which runs from June 11 to August 4, 2013.