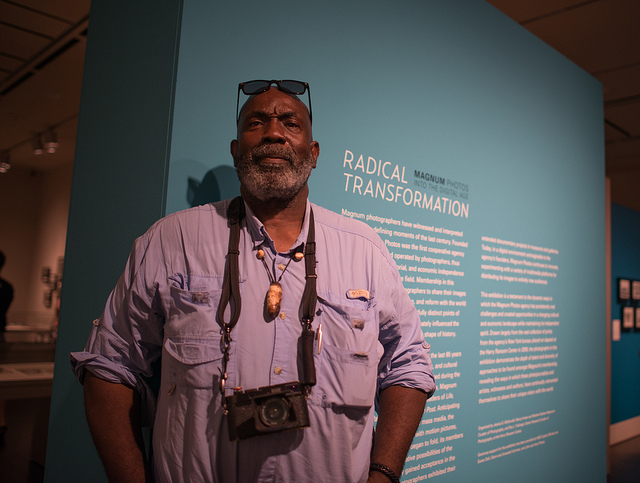 Eli Reed has worked as a professional photographer with Magnum Photos since 1988 and as a clinical professor of journalism at The University of Texas at Austin since 2005. To Reed, his success directly results from the simple motivating question, “Why would you want to be less than what you can be?”

Throughout his career, Reed’s understanding of his potential has been bolstered by his active relentlessness. “You’ve got to do this work because you really want to do it,” he said. “It’s not necessarily going to happen easily. It’s not going to happen ‘just because.” Reed’s combined vision and dedication has driven his career from newspaper journalism to international photography in Europe, Africa, Asia, and Central and South America.

Perhaps more significantly, Reed insisted, he knows when to say yes. “You get… in to various situations because of you,” he said, “You make the decisions, and it’s important [to know] when to say yes. We’re all living on borrowed time from the day we’re born to the day we pass away, so what are you going to do before you go?” Reed strives to share this lesson with his students, emphasizing what seems to be his mantra in both photography and life at large: “Awareness is everything.”

It was Reed’s awareness that first led him to Sudan in 2001. The photographer was asked to join a film crew to document the Lost Boys, young refugees from the Second Sudanese Civil War. Although he was already particularly interested in Africa, Reed said the opportunity to travel there arose because he was “paying attention,” and he hopes his audience will do the same. The goal of the photo documentary of the Lost Boys, he explained, is “to educate people” and to spark interest in and action on their behalf. A dozen photographs are on display at the Harry Ransom Center through December 8 in an exhibit entitled Eli Reed: The Lost Boys of Sudan.

Ultimately, all aspects of Reed’s profession stem from a single motivation: to “pass on” information and experience, either through the classroom or professional photography.

“I’ve had a really interesting life,” he said, “I’ve seen a lot of people in different situations… and some terrible things happen, and some wonderful things happen, and it’s called the ‘Circle of Life.’ I can’t think of a better thing to do than, not just to share it, but to help people who are going on into this ‘Brave New World.’”