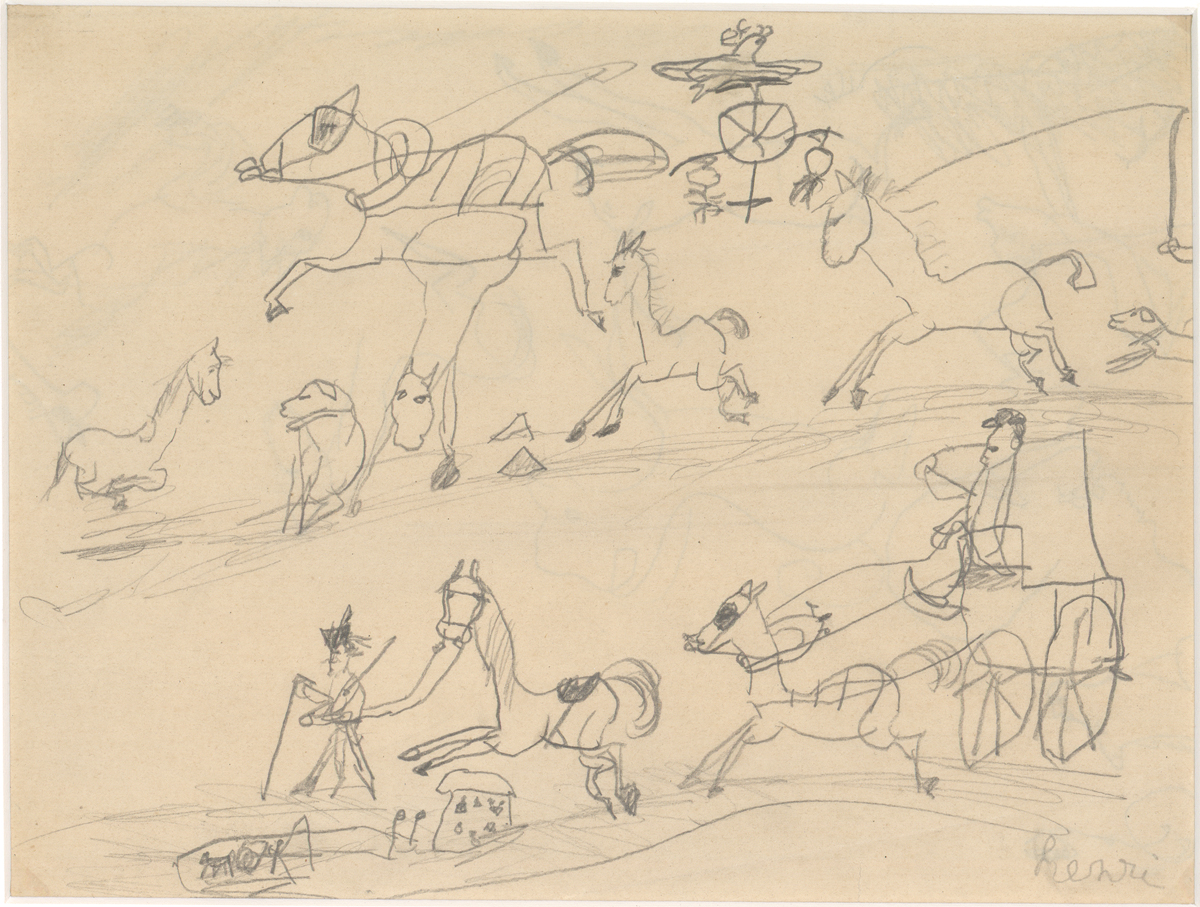 This scene in the window at the Harry Ransom Center shows one of the earliest known drawings by Henri de Toulouse-Lautrec—a child’s pencil drawing of animals and farmers and country life. The artist was six or seven years old when he drew it; his mother kept the sketch, and it was later found among a treasure trove of family papers that were brought to Austin by the former curator of the Ransom Center’s French collection, Carlton Lake. The drawings are especially important because, before they were discovered, scholars had believed that young Henri began to draw around the age of 10. As Lake pointed out, the early drawings show the “same sharp wit and intelligence that characterize Lautrec’s mature work,” and they have “a precocious self-assurance, along with the full flavor and incisive observation of his later work.”

Henri de Toulouse-Lautrec lived from 1864 to 1901, and today his work remains among the most recognizable art of the Post-Impressionist period. He was interested in showing Parisian night life without its glitz and glamour; instead, he captured the essence of the people who made the bohemian lifestyle so colorful during the fin de siècle. Today we know the most about Toulouse-Lautrec during his time in Paris, but he grew up in the Midi-Pyrénées region of France, the son of an aristocratic mother and father who were first cousins. He died at the young age of 37, most likely of alcoholism and syphilis. He spent much of his adult life in the Parisian demimonde and brothels, but his mother was always a controlling figure in his life, and her collection of his work and papers informs Toulouse-Lautrec scholarship to this day.

The story of the Toulouse-Lautrec family papers and how they came to Austin is vividly told in Carlton Lake’s memoir Confessions of a Literary Archaeologist, published in 1990. The chapter detailing Lake’s discovery of the artist’s letters and drawings in the 1960s at the bookstore of Georges Privat on the Boulevard Haussmann, provides fascinating insights into collecting literary works and highlights the importance of primary sources for gaining insight into the creative process at work.