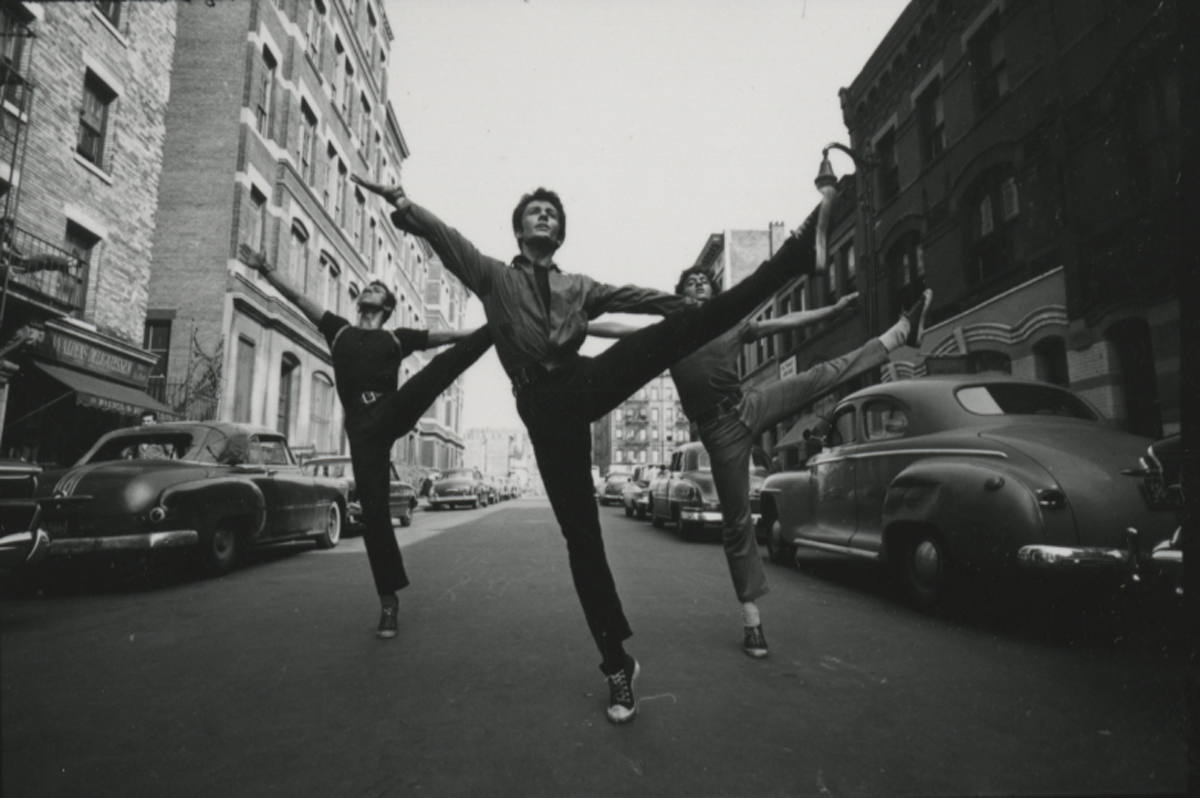 This image from West Side Story, contrasting dancers caught en point against a realistic New York street, was taken by photographer Jack Harris, who was brought in to capture the dance sequences during the making of the film. This 1961 film is an adaptation of the 1957 Broadway musical of the same name, which was itself based on Shakespeare’s Romeo and Juliet. The film is set in New York City in the mid-1950s, where two street gangs, the Sharks and the Jets, are fighting because of their different ethnic backgrounds. One night at a neighborhood dance, Tony, a former Jet, and Maria, the sister of the Shark leader, dance together and promptly fall in love. As a result, a deeper rift develops between the street gangs, and Maria and Tony must ultimately choose between their cultural connections and their love for one another.

Robert Wise was named director and producer of the film, but because he had no experience directing a musical, Jerome Robbins, who had directed the original Broadway production, was also brought in to provide assistance for the music and dance numbers. Wise and Robbins quickly became at odds with one another, and after the first day of filming, they were no longer on speaking terms. Robbins was soon fired, and the remaining musical numbers were directed by his assistants, but Robbins was still featured in the credits as a co-director of the film.

The film stars Richard Beymer and Natalie Wood, who were cast as Tony and Maria. Richard Beymer secured the role of Tony over contenders such as Elvis Presley, Warren Beatty, and Burt Reynolds. Natalie Wood was not originally considered for the role of Maria, but she was romantically involved with Beatty when he performed his screen test for the role of Tony. Wood read opposite Beatty during the screen test, and the producers instantly became enamored with her as Maria.

West Side Story was released on October 18, 1961 and became the second highest grossing film of the year. Garnering significant praise from critics, the film went on to win awards in 10 of the 11 Academy Award categories in which it was nominated, including Best Picture, Best Director, Best Score, and Best Cinematography. To this day, West Side Story has won more Academy Awards than any other musical.

The Ransom Center holds the photographs of Jack Harris, who had a thriving career as a photographer of theater, dance, and music. Besides Harris’s stills for this film, the Center also holds photographs, programs, and published materials related to Harris’s work documenting dance performances, predominantly for the American Ballet Theatre and the New York City Ballet. The Center also holds the papers of West Side Story screenwriter Ernest Lehman.