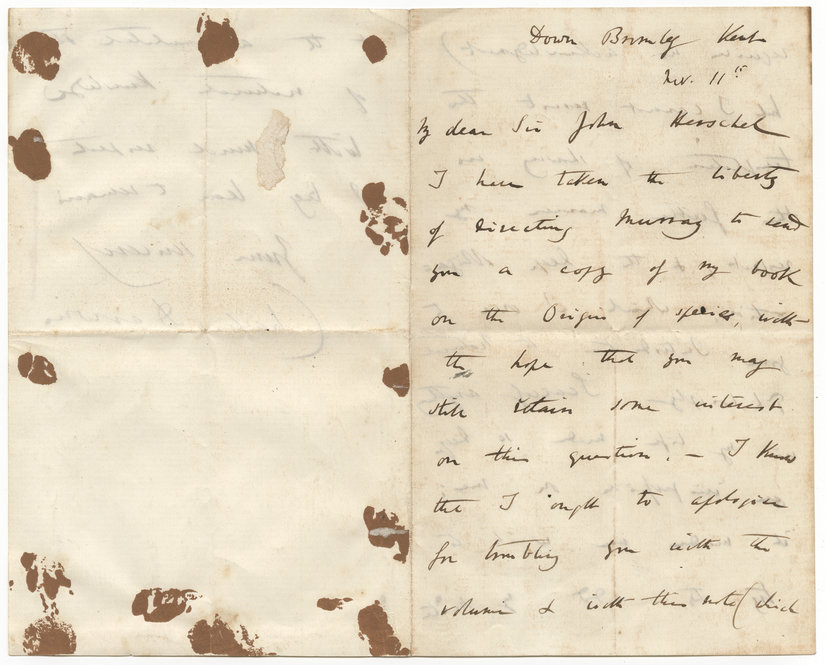 To mark Darwin Day today, we share one of the Ransom Center’s more interesting copies of the first edition of Charles Darwin’s most famous work, On the Origin of Species. The Center owns several first editions, but this particular one was sent by Darwin to Sir John Herschel, the most famous English scientist of his day, inscribed simply “From the author.” Herschel was a member of a great scientific family, which included the astronomers William and Caroline Herschel; the Herschel papers are the most consulted history of science resources at the Center.

Darwin identified Herschel in the second sentence of the Origin as “one of our greatest philosophers.” Early in his career, Darwin knew that the elder scientist had defined “the species question”—or in Herschel’s words, “that mystery of mysteries”—as being the central one for the new science of biology (the term wasn’t widely used until mid-century). In 1836, the young scientist, then only 25, was returning from his famous voyage to the Galapagos Islands on board the Beagle.

From June 8 to 15, 1836, the Beagle was in port at Cape Town, and during this time Darwin visited Herschel, who had established an observatory in South Africa in order to expand the star catalogs made by his father, William Herschel.

We don’t know what was said, but very likely geology and volcanology were involved. Herschel inspired Darwin to apply the critical analysis of data associated with the physical sciences to the emerging life sciences. As University of Texas at Austin Professor Steven Weinberg noted in a talk at the Ransom Center, astronomy has historically led the way in the development of scientific methodology, later applied to other disciplines.

The Darwin-Herschel copy of the Origin, along with the letter of transmittal, stands behind as the “fossil record” of this remarkable meeting. The text of Darwin’s letter follows:

I have taken the liberty of directing Murray [John Murray, his publisher] to send you a copy of my book on the Origin of species, with the hope that you may still retain some interest on this question.— I know that I ought to apologise for troubling you with the volume & with this note (which requires no acknowledgment) but I cannot resist the temptation of showing in this feeble manner my respect, & the deep obligation, which I owe to your Introduction to Natural Philosophy. Scarcely anything in my life made so deep an impression on me: it made me wish to try to add my mite to the accumulated store of natural knowledge