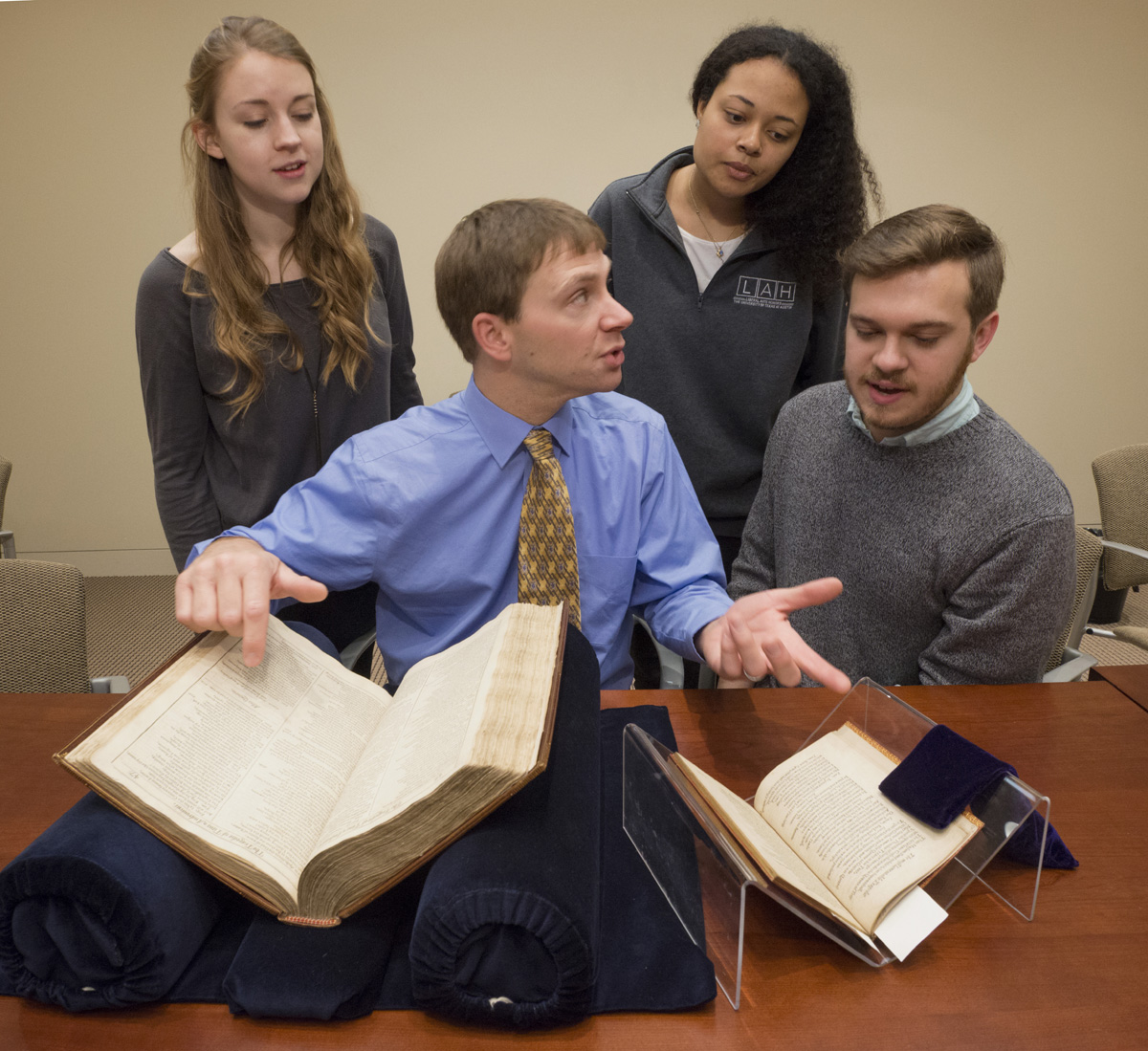 Have you ever wondered how a play or film might have turned out differently? This was the guiding question in the new Humanities Honors course—titled “Drama in the Archives”—offered in fall 2014 by Dr. Elon Lang, lecturer and former part-time archivist at the Ransom Center. During the semester, Lang brought students from his class to the Ransom Center at least once per week to learn about the Center and to learn how to conduct original primary research in the Center’s theater and performing arts collections.

In the course, students studied several representative examples of modern and contemporary Anglophone drama, as well as Shakespeare and Shakespearean performance. These included Shakespeare’s King Lear, Tennessee Williams’s Streetcar Named Desire, Arthur Miller’s Death of a Salesman, Samuel Beckett’s Waiting for Godot, David Mamet’s Oleanna, and Tom Stoppard’s Arcadia. All of these are supported by strong collections in the Ransom Center. Students were asked to read, analyze, and discuss printed editions of these plays during regular class meetings and then to examine selections from Ransom Center archives that illustrated how those plays were shaped by their authors and publishers and how they have been altered by various performances and interpretations over time.

For example, regarding King Lear, students compared the Ransom Center’s copy of the 1619 Second Quarto edition of the play to its three copies of the 1623 First Folio edition—noticing intriguing differences in key speeches that altered their perception of the characters. They then also viewed artistic representations of Lear’s throne room from the Ransom Center’s Boydell Shakespeare print collection (neo-classical style including architecture with Grecian columns, emphatic facial expressions and rippling musculature) and the Norman Bel Geddes collection (expressionist style with intense colors, outlines of figures, and primitive architecture resembling Stonehenge). Students compared all these variations to recent productions and films of the play and wrote extensively about how the archival context helped them understand the history and impact of choices made by directors and producers.

Lang came up with the idea for the class after describing some of his archival work on the Ransom Center’s Pforzheimer manuscript collection to his humanities students. Despite their interest in what Lang suggested could be learned from archival materials, very few students had actually visited the Ransom Center, and even fewer had contemplated doing research there.

“This struck me as a terrible shame,” Lang said, “but also a remarkable opportunity.”

As Haley Williams, a third-year student in the class and president of Liberal Arts Honors Student Council, wrote: “In my first two years of undergrad, I often passed the ‘big glass buildings with the pretty pictures’ on my way to and from class. I had even visited the exhibits on occasion and meandered over to listen to a lecture from time to time. However, in my mind, the Harry Ransom Center was for graduate students and professors, a place off limits to undergraduate students such as me. Thankfully, this semester I was proven wrong.”

Lang decided that it should be his mission to design a course that would show how the Ransom Center could serve as a valuable and approachable research tool for all interested users—especially the University of Texas at Austin’s undergraduates—and to show how much students could gain from working with archival materials. He chose important plays as the subject matter for the class partly because of the Ransom Center’s impressive collections and partly because the consequences of creative choices that can be revealed in an archive become clear very quickly when analyzing dramatic texts.

“When you imagine a text being performed by actors, you are already engaged in a process of analyzing unstated elements of movement, intonation, emphasis—and these interpretations can change drastically when you see how the words in a speech or the sequence of actions in stage directions transform over time,” Lang said.

For A Streetcar Named Desire, students analyzed the numerous original drafts of the play in the Tennessee Williams collection (one of which includes an ending where Blanche DuBois does not go crazy). They then considered how the changes in the text correlated with Williams’s correspondence with his agent, Audrey Wood, about how to edit and then cast the play—and finally how to handle his objections to the famous 1951 screenplay starring Marlon Brando and Vivien Leigh. For a final exercise, students attended a production of the play being staged on campus and had in-depth discussions with the director (Jess Hutchinson, M.F.A. candidate in directing in the College of Fine Arts at The University of Texas at Austin) about how she used the Ransom Center’s collections to inform her production process.

Viewing rare and valuable materials in the Ransom Center reading room offered students a chance not only to develop a critical eye but also to realize a new and sometimes spiritual appreciation for humanistic inquiry.

“The pages spoke like the hinges of a haunted house, [both] daunting and enticing,” wrote Abraham Kinney about the Shakespeare First Folio. A senior English major and long-time Austin resident, Kinney describes how, in the class, “we were able to see the meticulous care that goes into the preservation of the vast archives compiled at the Ransom Center… In this place of intellectual agency, my focus shifted from merely researching in the dull categoric [sic] way, talking, writing, getting a grade, and moving on, to digging deep within the traces that our cultural heritage has left us, in a way that sparked a serious level of critical thought about who we are and how we are bound in the ways we think.”

After several weeks of guided readings and archival work, Lang had students develop their own research projects that involved close attention to an item in the Ransom Center’s collections and its historical and critical contexts. Students presented their research to an audience of Ransom Center staff and Liberal Arts faculty. Paul Sullivan, a lecturer in Plan II and the English Department who also volunteers at the Ransom Center, wrote, “Clearly, encounters with the archives made a big difference in how these bright young people will now read texts, and the world!”

Lang hopes to offer this course again in spring 2016, and in the meantime he is working to develop a summer workshop for high school English teachers through UTEACH to adapt some of his archive-oriented teaching methods for secondary education.