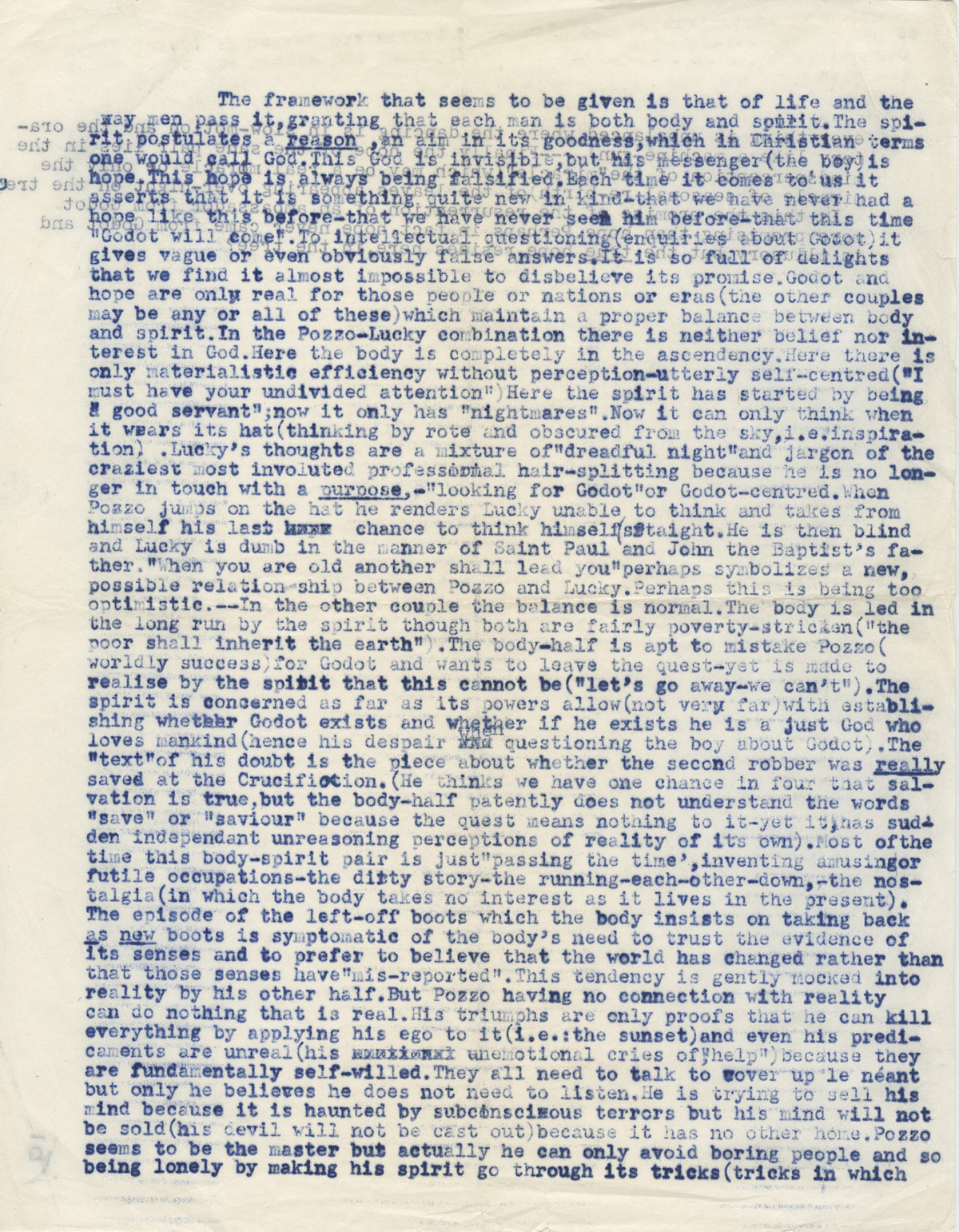 Maureen Clark is a third-year government and Liberal Arts Honors student in Dr. Elon Lang’s “Drama in the Archives” course. In the course, students used resources at the Harry Ransom Center to better understand plays, texts, dramatists, cultures from which they are drawn, and the archival process itself. Below, Clark shares her experience in the class.

After reading Samuel Beckett’s seminal work Waiting for Godot I was at a loss. I felt that there existed some sort of lack in the work (or at least my understanding of it). I felt that I needed to understand Beckett to understand the play. I entered the Harry Ransom Center keen on unearthing the history of an avant-garde playwright known for his works in the Theatre of the Absurd. What I found waiting for me were letters, journals, and manuscripts. As I looked through the letters, hoping to parse out some personal connection with Beckett and how he felt about Waiting for Godot, I felt like a detective. I was going through someone else’s mail, piecing together fragments from the past: postcards with aging purple portrait stamps and shiny photo fronts of exotic places where sepia had begun to creep in through the corners and long letters grieving the losses of beloved friends.

As I looked through his correspondence and journals, I learned that Beckett was a member of the French Resistance. He lost multiple friends and allies on the battlefield and in concentration camps. One such friend, a fellow member of the Resistance and the man that convinced him to join, was Alfred Péron. Beckett chose to live permanently in France, abandoning his home nation of Ireland for two main reasons. The first was the overwhelming sense of guilt he felt at the loss of his friends, and the second was to fulfill his final promise to Alfred: that he would take care of his wife, Maya “Mania” Lézine Péron, if anything were to happen to Péron during the war. Beckett kept his word and became close long-term friends with Mania, writing her often and discussing anything from vacation plans to manuscript ideas.

In one letter on June 12, 1969, Beckett provided a mimeograph from Edith Fournier, a former student of Péron, in which she explained the meaning of Godot. He explained to Péron that with the exception of a few “misconceptions” Edith’s analysis was “remarkable.” Finally, I was beginning to unearth Beckett’s understanding of the play, which was no small feat. Beckett is even famous for having said “[i]f I knew who Godot was, I would have said so in the play.”

Rather than focusing on describing the play through an Existential lens or even describing it as a piece for the Theatre of the Absurd, Fournier describes the play through a Nietzschean lens. Fournier does not explicitly cite Nietzsche, but focuses on themes found in Nietzsche’s Thus Spoke Zarathustra. For example, Fournier discusses the meaning of the play to be waiting, not Godot. Moreover, Fournier wrote, the reason the characters wait in the play is similar to a religious waiting for the afterlife: it is habitual and eternally repeating.

As a result, I pointed my external research toward a Nietzschean nihilistic reading of the text. I was pleasantly surprised when I found readings in Thus Spoke Zarathustra that were mirrored in Godot and Fournier’s analysis of it. Even more so, I found allusions to Nietzsche in Beckett’s journals, although never explicitly named. Much like his comments on Godot, Beckett’s journals and correspondence were vague and brief, but the research and meaning that I gleaned from them at the Ransom Center were comprehensive and clear.