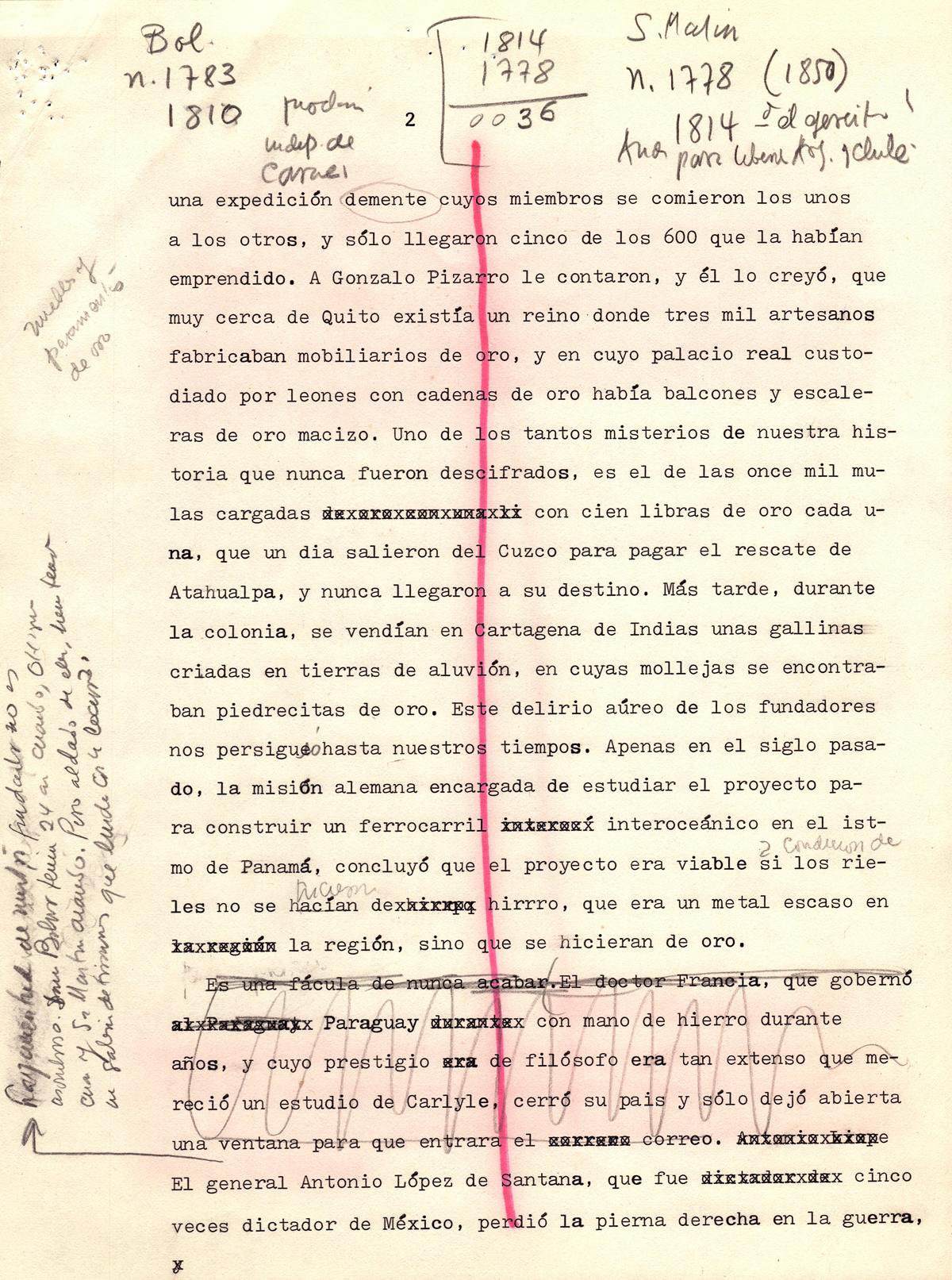 Gabriel García Márquez was a perfectionist when creating his masterpieces, and that quality is demonstrated in his manuscripts. With the Ransom Center’s recent acquisition of the late author’s archive, scholars will be able to see the author’s edits and discuss García Márquez’s writing process. José Montelongo, the interim Latin American bibliographer at the university’s Nettie Lee Benson Latin American Collection, writes about the thrill of delving into García Márquez’s manuscripts and exploring the pentimenti—repentances, compunctions, remorses—in the archive. This piece originally appeared in the Spring 2015 Ransom Edition newsletter.

Underneath the final brushstrokes of great paintings, below the surface, there are sometimes marks of doubt, hidden lines, and suppressed colors. These nearly invisible brushstrokes are called pentimenti—repentances, compunctions, remorses. I like the word pentimenti because it evokes a sense of drawn-out struggle and internal debate. Masterpieces don’t usually come to the world in one simple and spontaneous act of creation, fully formed and pristine. Artistic creation is usually messy. It might not be too much of a stretch to venture that, when dealing with a literary archive, the messier the better. My personal preference: the more pentimenti contained in an archive, the more I like it.

The Gabriel García Márquez archive, recently acquired by the Harry Ransom Center, contains numerous manuscripts with handwritten additions, crossed-out words and sentences, notes on the margins, excisions, discarded paragraphs, and other evidence of authorial repentances. A somewhat awkward combination of Italian and English would allow me to say that this is a very remorseful collection of papers.

Among the correspondence there is one letter where García Márquez reflects on his creative process after finishing The Autumn of the Patriarch. García Márquez notes that he should have written the novel in verse, except he couldn’t find the courage to do so. Nevertheless, I think it reads like a long poem about power and decrepitude, a portrait of a Latin American despot who doesn’t seem to know that at some point everybody has to die. In this archive researchers will be able to study the very idiosyncratic prose of García Márquez as though he had spent his life crafting a lengthy, multi-volume poem with dozens of characters and plenty of melodramatic twists.

Remnants of the deliberative process of a writer are of immense value to scholars and amateurs because they provide a window into the artist’s workshop. I mention both the literary critic and the common reader because García Márquez is an author who obtained a most difficult and rare artistic achievement: nearly unanimous critical acclaim and a tremendously devoted and enormous readership worldwide. It is truly exceptional that so many readers around the world not only admired the writer but loved the person. I think this happened because readers could feel the arrival of a unique sensation, the nouveau frisson, the strange and palpable addition of a new imaginary world that suddenly becomes part of one’s own psyche.

García Márquez was a master of the novellas that read like Greek tragedies set in the Caribbean and a master of the sprawling, genealogic novel in which everything fits, including history and crime and love and miracles. Above all, he was an intoxicating stylist with the primal instincts of a storyteller. As the literary critic Christopher Domínguez Michael has put it, García Márquez’s imagination was so powerful and original that he will be remembered as a creator of myths, a Latin American Homer.

Within the holdings of the Ransom Center, the literary manuscripts of García Márquez become part of a constellation of innovators who influenced his own formation as a writer. William Faulkner, Ernest Hemingway, Virginia Woolf, Jorge Luis Borges—these writers are both his direct lineage and his peers. More than 150 University of Texas at Austin faculty members engage with Latin America inside and outside the classroom, and numerous graduate and undergraduate students choose our university for its emphasis on Latin America. With outstanding patience and perseverance and care for almost 100 years, the Nettie Lee Benson Latin American Collection has assembled one of the premier libraries devoted to the region. The Teresa Lozano Long Institute of Latin American Studies (LLILAS) integrates more than 30 academic departments across the university and ranks among the world’s leading centers of its kind. All this to say that, in its new home at The University of Texas at Austin, the Gabriel García Márquez archive is surrounded by a rich cultural milieu and finds itself in fertile ground for intellectual discussion. So much for remorse—let the celebration begin.