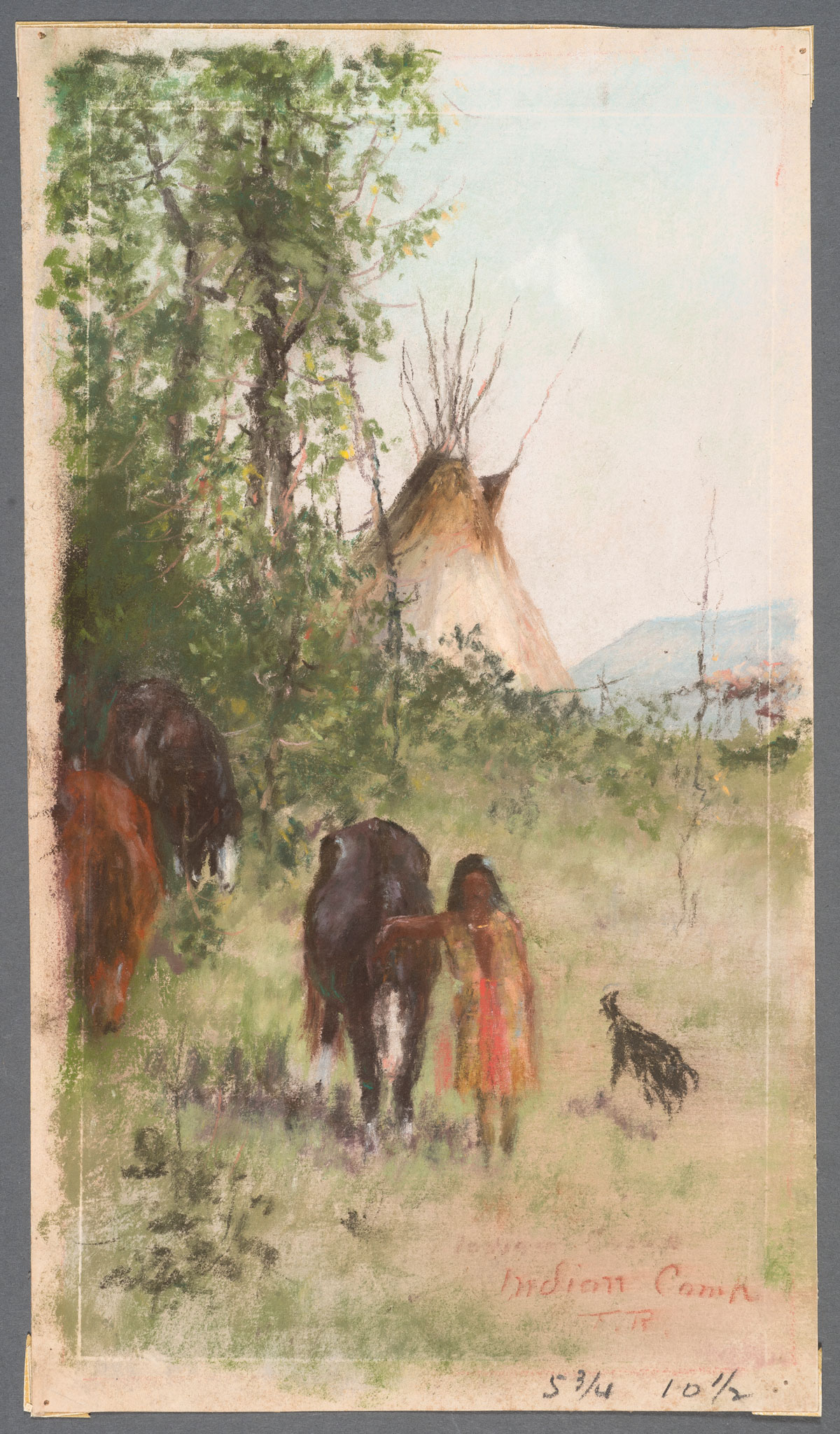 From August 4 through November 29, the Harry Ransom Center hosts the exhibition Frank Reaugh: Landscapes of Texas and the American West. It showcases more than 100 artworks by renowned artist Frank Reaugh (pronounced “Ray”) drawn from the Ransom Center’s own collection as well as public and private collections from around the state. The companion book Windows on the West: The Art of Frank Reaugh, edited by Curator of Art Peter F. Mears, complements the exhibition, and published by the Ransom Center and UT Press. Excerpted below is the foreward to the book, “Frank Reaugh in Retrospect,” written by Ron Tyler. In it, Tyler reflects on Reaugh’s life and the context of Reaugh’s distinguished career.

Frank Reaugh was the most improbable of artists, a European-trained Impressionist whose entire oeuvre was devoted to Longhorn cattle and the West Texas landscape. He produced literally hundreds, perhaps thousands, of pastels and paintings during a more than 50-year career and, through his teaching and summer sketching trips, influenced generations of students. But his reputation today is based mainly on the esteem of his former students and the small, delicate, usually horizontal pastel sketches that survive in private hands rather than on what he considered his best work, which he saved and bequeathed to “the Southwest at large.”[i]

Reaugh came of age as the American West gained popularity. The Civil War had ended, and the West seemed to be what historian Frederick Jackson Turner later called the eastern laborer’s “gate of escape to the free conditions of the frontier.”[ii] The spectacular landscapes of Albert Bierstadt and Thomas Moran (absent of Indians) made it seem that the West was a paradise waiting to be possessed; Ernest Blumenschein and Joseph Henry Sharp popularized the sparkling skies and slumping adobes of Taos; illustrations by Frederic Remington and Charles M. Russell, Henry Farny and Rufus Zogbaum, that appeared in Harper’s Weekly, Leslie’s Illustrated, and other magazines that Reaugh might have studied, romanticized the lonely trail driver who herded the lean and sinewy descendants of the Spanish cattle from South Texas toward the Kansas railheads; while Owen Wister, Andy Adams, and Zane Grey made fictional heroes of him.

Like others of his classmates at the Académie Julian in Paris—Robert Henri, for instance, rebelled against the salon-style paintings of the day to become one of the founders of the Ashcan School—Reaugh chose a different course. From the atelier, he enthusiastically returned to the “broad plain with its clear air and active life.”[iii] This was the heyday of the trail drive, and he had every chance to join Buck Taylor and Charlie Siringo in the adulation of cowboys, for ranchers grazed their cattle near his family’s Terrell, Texas, farm, and he followed the cowboys on the trail in the 1880s.[iv] He recalled, admiringly, that the cowboy’s “wildness … has been overstressed, but his nobleness, his daring, bravery and skill have never yet been adequately told.”[v] He enjoyed Emerson Hough’s novel of the trail drive, North of 36, which inspired him to visit the Big Bend country, but he probably would have agreed with the critics who felt that the main character in the book was Alamo, the lead steer.[vi] Reaugh’s passion was for the West Texas landscape and the “strong, graceful, agile and alert” Longhorn, which he found to have “the most varied and beautiful color of any animal in existence.”[vii]

With his self-made, delicate pastel colors, his Impressionist style, and his plein air technique, Reaugh soon gained a regional if not national reputation as “the cowboy artist,” or, as his hometown newspaper qualified, the “Painter of the Texas Cow.”[viii] A critic for a Chicago newspaper explained, “One who has lived a plain’s life feels the charm of [his pictures]… and breathes a different atmosphere from him who has only seen nature on canvas. Hamlin Garland, who has ridden over the Western desert can see much in ‘The Round Up,’ which Lorado Taft misses. Lorado Taft admires the picture, but Hamlin Garlin loves it.”[ix] Reaugh was elected to full membership in the Society of Western Artists in 1900 and regularly exhibited in galleries and museums in the Midwest and the East, and annually at the State Fair of Texas. He also showed at the World’s Columbian Exposition in Chicago in 1893 and the Louisiana Purchase Exposition in St. Louis in 1903.[x]

Reaugh’s quest for authenticity, perhaps, deprived him of a larger audience. When Harper’s editors advised the budding author Owen Wister that he needed to produce “a series of pure adventure” to attract a national audience, he confided to his diary that “my next duty is to hunt material of adventure voraciously.”[xi] Reaugh did not make that choice; he sought accuracy. His hugely successful contemporary, Frederic Remington, when faced with the same choice, accepted the conventional wisdom of the day, which is readily apparent in comparing his frenetic 1889 masterpiece A Dash for the Timber with Reaugh’s calm, almost stoic but classic Watering the Herd of the same year. Remington’s choice brought him notoriety and wealth; Reaugh’s choice brought him satisfaction. “The driving of great herds of cattle over the long trails to the northern market became one of the great enterprises of the world,” he recalled, “but I was the only artist, it seems, who thought of it as being a subject to paint…. For me… the great southwestern cow country had a wondrous charm.”[xii] “Now, the subjects have passed,” he concluded. “They will not be painted with like authenticity again.”[xiii]

Purchase the book Windows on the West: The Art of Frank Reaugh at UT Press website.

Read more about curator Peter Mears in our Meet the Staff Series.

[i] To date there has been no comprehensive catalog or retrospective exhibition of Reaugh’s work and few publications, notable exceptions being Donald L. Weismann’s Frank Reaugh: Painter to the Longhorns (College Station: Texas A&M University Press, 1985) and the recent and limited-distribution publications of the Sun and Shadow Press in Oak Cliff, Texas.

[ii] Frederick Jackson Turner, The Frontier in American History (New York: Henry Holt, 1921), 259.  This “Safety valve” theory has been discredited by a number of historians.  See, for example, Fred A. Shannon, “A Post Mortem on the Labor-Safety Valve Theory,” Agricultural History 19 (January 1945): 31-37.

[iv] Buck Taylor, known as the “king of the cowboys,” was one of the performers with Buffalo Bill’s Wild West show.  His injury during a London performance made international news.  See “The King of the Cow Boys,” For Worth Daily Gazette, September 8, 1887, 5, cols. 1-2; and “An Accident to the King of the Cowboys,” British Medical Journal 1, no. 1380 (June 11, 1887): 1288-1289.  Charles A. Siringo wrote the first cowboy autobiography, A Texas Cowboy, or, Fifteen Years on the Hurricane Deck of a Spanish Pony, Taken from Real Life (Chicago: Umbdenstock, 1885).