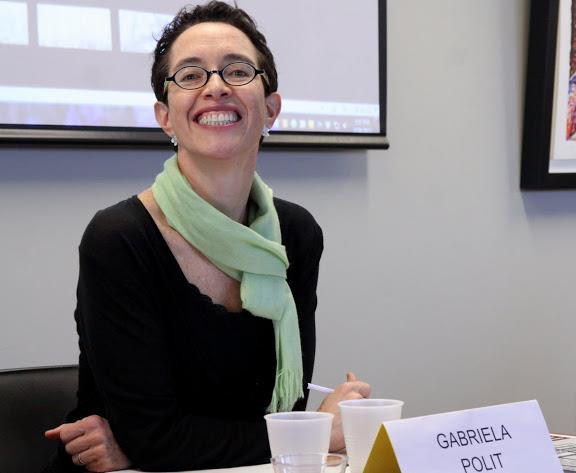 Gabriela Polit is Associate Professor in the Department of Spanish and Portuguese at The University of Texas at Austin. She will moderate Thursday’s, October 29, “Gabo the Storyteller” panel at the Gabriel García Márquez: His Life and Legacy symposium. Polit’s current research focuses on the often-dangerous work of journalists who write about some of Latin America’s most pressing problems. She has previously explored representations of violence in armed conflict, political turmoil, and illegal business; her current focus is the affective experience of writing. Polit is interested in analyzing how reporters and journalists listen to the story, and show respect to their subjects through their narrative.

Why do you think García Márquez succeeded as a storyteller?

I was recently at an event in which I met several close friends of García Márquez. They all talked about the rigid discipline he had with his writing schedule, his obsession with understanding the labyrinths of love in order to transform these into stories, and his extreme generosity. I cannot say that those qualities make a good writer; there is not a formula—otherwise all of us could become one. But I would say that in his case, that magic combination of work, sensitivity, and humility made him the writer he was. I can talk about what García Márquez himself said and what most of his critics repeat: a childhood spent around strong women who were always telling him stories that triggered his imagination, and the refinement of a musical language that owes a lot to the region where he grew up. But I would also add something about the times. His work came out during the terrible years of the Cold War, when state repression and dictatorships ruled a continent that became the battleground of the two world superpowers, the US and the USSR. For unfortunate reasons, we were in the media every day. People from all over the world had to look at the map to find out where the terrible events were taking place. A group of young Latin American writers living in Europe (some were in exile) met a magnificent woman who changed the rules of the game in the publishing world. She fought for the rights of writers and helped them make a living from their books, something that was unknown in the Spanish-speaking world until that time. We all owe to Carmen Balcells, García Márquez’s editor, a large part of the stories we now enjoy. Balcells gave him time. All these elements were part of his success.

Why do you believe García Márquez’s work resonates with an international audience?

When we talk about universal literature, with all the limitations that that concept implies, we usually refer to stories that touch some fundamental elements of our human condition, and it doesn’t matter if the story takes place in the Colombian Guajira, if its characters are from rural Mississippi, or if the writer is a nun living in a Mexican convent in the seventeenth century. Writers who are considered immortal are those who express with beauty the most fragile elements of our mortality, like the Colonel’s dignity in Nobody Writes the Colonel, or Angela Vicariio’s secret love for Bayardo San Román in Chronicle of a Death Foretold, or even the bleeding finger of Nena Daconte in the short story “The Trail of Your Blood in the Snow” from Strange Pilgrims: Twelve Stories, to mention just a few in García Márquez’s work.

What makes an author a good storyteller?

I could answer this question in two ways. I could say that a good storyteller is someone who knows how to work with time in her narrative, who has good technique, who creates realities with words as if they were musical notes, and so on. Or I could have a more personal approach and say that I have found that my favorite writers are always distracted from reality, looking at and feeling what is not obvious to the rest of us, connected to the world and to people in a different way. This might sound like a romantic definition of a genius, but in reality I think that such writers are people who are not fully comfortable with their world, no matter their origin, their ethnicity, or their political beliefs. They all see reality with an oblique look. The stories told from those angles are the ones I enjoy the most.

The symposium is a celebration of García Márquez’s work, and a celebration of the arrival of his personal archive to our institution. I want the symposium to be the beginning of many initiatives; I want the symposium to provoke. I have been saying this since I learned that this collection was coming to the Ransom Center: it is the opportunity to think about the many possibilities of making this archive something vibrant and alive. I am not only talking about teaching students of younger generations to enjoy reading the extraordinary work of García Márquez, but also making them want to read. That means to be creative, to invent things that would make young people want to be part of something fun. I am sure that the Ransom Center and LLILAS will collaborate in future events that will engage our students and our community, and I can also imagine developing projects to make this archive available beyond our campus. I like the idea of the celebration of the arrival of García Márquez to campus, but I like more the idea of an inspiration to make this archive alive.