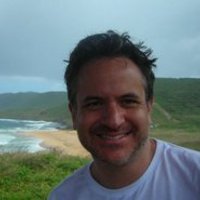 Jason Borge is Associate Professor in the Department of Spanish and Portuguese at The University of Texas at Austin. Borge will moderate Friday’s, October 30,  panel “Cinematic Scribe and Muse” during the Gabriel García Márquez: His Life and Legacy symposium.

Borge’s teaching and scholarship focuses on encounters between popular culture, literature and cinema in Latin America, particularly in Brazil and the Southern Cone. In addition to publishing articles in such journals as Hispanic Review, Revista Canadiense de Estudios Hispánicos, Journal of Latin American Cultural Studies, and Luso-Brazilian Review, he has written two books documenting and analyzing the early impact of Hollywood on Latin American intellectuals: Avances de Hollywood: Crítica cinematográfica en Latinoamérica, 1915-1945, and Latin American Writers and the Rise of Hollywood Cinema.

His current research concerns what he calls the “jazz imaginary” in Latin America, and examines the ways Latin American cultural discourse has shaped jazz as a performative practice of vital symbolic regional importance, and Latin American music’s place in the North American and European jazz canon.

García Márquez’s entire career was deeply shaped and informed by film. In addition to his other journalistic writing, Gabo was a regular film critic for the Bogotá daily El Espectador in 1954–55. Also in the fifties, he studied at the legendary Centro Sprimentale di Cinematografia in Rome, and collaborated with other members of the so-called Grupo de Barranquilla in the production of the experimental short La langosta azul (1954). In the 1960s and 1970s he wrote screenplays for such films as El gallo de oro (1964) and María de mi corazón (1979), and in the 1980s his celebrated fiction provided the source material for films as wide-ranging as Eréndira (1983) and Farewell to the Ark (loosely based on One Hundred Years of Solitude). García Márquez developed one of his most enduring partnerships with Mexican filmmaker Arturo Ripstein—a relationship that began with Tiempo de morir (1966) and Juego peligroso (1967), and culminated over three decades later with Ripstein’s widely praised adaptation of El coronel no tiene quién le escriba (“No One Writes to the Colonel”) (1999).

What did film allow García Márquez to accomplish that couldn’t be achieved in the literary medium?

When he was still young and relatively unknown: money! García Márquez made a decent living from both his film criticism and also (somewhat later) his work as a screenwriter. Of course, particularly after he won the Nobel Prize in Literature in 1982, his literature itself served as an inspiration not only for film adaptations but also for modes of filmmaking that directly or indirectly bore the stamp of Gabo: his unique aesthetic and political sensibilities, his love of popular culture, his dark yet gentle humor, etc. In fact, it is his somewhat unheralded impact on a new generation of Colombian directors that I wished to explore by organizing a concurrent and complementary film series (Beyond Macondo: GGM and Contemporary Colombian Cinema), screening throughout October at the Austin Film Society’s Marchesa Theatre, with one screening that occurred on The University of Texas at Austin campus at the Harry Ransom Center’s Prothro Theater on October 21.

What is the perception of García Márquez’s work as a figure in the film industry as opposed to the literary world?

I think he is seen above all as a major advocate for Latin American cinema. Along with New Latin American Cinema pioneers Fernando Birri and Julio García Espinosa, García Márquez founded La Escuela Internacional de Cine y TV (EICTV) in San Antonio de los Baños, Cuba, in 1986. Since emerging as one of the most prestigious and influential film schools in the Americas, the EICTV has helped to keep alive the technical innovation and social engagement so typical of Latin American filmmaking since the 1960s. I would also note that the film school has kept Cuba on the cinematic map through its affiliation with Havana’s Festival Internacional del Nuevo Cine Latinoamericano, since the 1980s one of the most important of its kind in the world.

As co-organizer and moderator of the symposium’s film panel, “Cinematic Scribe and Muse”, I am interested in bringing together important voices in García Márquez’s filmic sphere of influence in the hope that they will shed new light on the writer’s other important contributions to global culture besides his literary works. It should be great fun. Scheduled to participate in the panel are Colombian director Ciro Guerra, García Márquez’s film biographer Justin Webster, and the author’s son, filmmaker Rodrigo García.