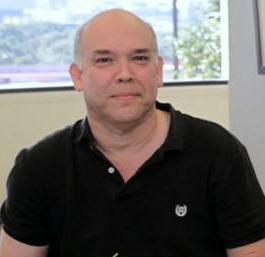 César A. Salgado is Associate Professor in the Department of Spanish and Portuguese, as well as former graduate advisor in the Program in Comparative Literature at The University of Texas at Austin. He will co-moderate Thursday’s, October 29, “Global Gabo” panel with Naomi Lindstrom atthe Gabriel García Márquez: His Life and Legacy symposium.

Why do you believe García Márquez’s work resonates with an international audience?

The troubled yet timeless story of Macondo—the fictional Colombian backwater of García Márquez’s novels—is the story of the developing world caught between steadfast tradition and rapid modernization, old belief systems and spellbinding new inventions, local power struggles and invasive foreign interests. While certainly a best-selling phenomenon in Europe and the United States, I’d say that García Márquez’s work has been best received by new readers from India, Africa, the Middle East, the Caribbean and, of course, Latin America, regions with long histories of colonialism and dependency whose paths to “progress” and modern literacy itself are full of the fierce excesses, contradictions, and ironies that characterize his fiction.

Who are some contemporary authors who show elements of García Márquez’s literary style?

Recent authors in Latin America today show few traits of magical realism, García Márquez’s signature style at the height of his popularity. While writers such as Isabel Allende brought a fascinating feminist angle to magical realism, new trends have emerged since the “boom” days so that fiction from Latin America today is no longer synonymous with myth or magic. There’s the dirty realism of Pedro Juan Gutiérrez and Zoe Valdés in post-Soviet Cuba, the movie-and-pop-informed cosmopolitanism of Alberto Fuguet (Chile) and Jorge Volpi (Mexico) from the McOndo and Crack generation of writers, and the revamping of the detective procedural by Ricardo Piglia (Argentina), Roberto Bolaño (Chile), and Leonardo Padura (Cuba). Yet all these trends bear the stamp of García Márquez’s influence in one way or another since his legacy cannot be limited to just magical realism. He also dealt with gritty realism in his journalism on cartel kidnappings in Colombia, with movie lore in his many film reviews and scripts, and with reinventing crime fiction in novels such as In Evil Hour and Chronicle of a Death Foretold.

Would an author today be able to parallel the scale of García Márquez’s influence?

I don’t think any author today can and should aspire to match Gabo’s popularity and influence. They should be inspired by his vision, his discipline, and his persistence, not by the scale of his success. Emblematic masterworks of the magnitude of Don Quixote and One Hundred Years of Solitude only happen once every few centuries.

I have been a reader of García Márquez since I can remember. I became a fan of his work while growing up in Puerto Rico. I can recall clearly being swept by a big wave of wonder and recognition when first reading Eréndira, A Old Man With Enormous Wings, and the rest of his exquisitely crafted short fiction. These fables were about the contradictions of modernity in countries like mine and reminded me of stories and experiences told in my own family. My encounter with One Hundred Years of Solitude led me to consider becoming a scholar of Latin American literature. In many ways, that book decided my academic career.