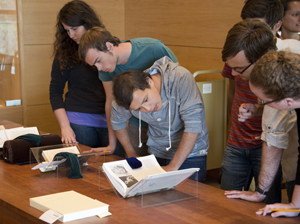 To commemorate the twentieth anniversary of the publication of David Foster Wallace’s Infinite Jest, Heather Houser, an Associate Professor of English at The University of Texas at Austin, will be one of the readers sharing their favorite passages from the novel on Wednesday, February 3, at noon. Undergraduates Dylan Davidson, Kendall DeBoer, Michael Esparza, and Deborah Lin will also be reading at the free event, Prose on the Plaza.

Past seminars Houser has taught on David Foster Wallace’s work have included class visits to the Ransom Center to view materials from the archive.

David Foster Wallace’s readers want to get inside his head. This isn’t only because there appears to be such depth to this polymath’s mind: so much that puzzles, intrigues, compels, and repels. It’s also because Wallace so famously said that the best of fiction gives us “access to other selves.” (I’d wager this line, which comes from a 1993 interview and not his fiction, is Wallace’s most cited.) It appears that this young writer made other selves accessible to his readers, and they craved more. They wanted to know the creative origins of those others and to know how much those others aligned with the writers’ own beliefs, fears, and preoccupations. The opening of Wallace’s archive at the Ransom Center in 2010 gave fans ample material for exploring the writer’s “self” and how it motivated his fiction and nonfiction.

I periodically teach a seminar exclusively on Wallace’s work for the Department of English Honors program and incorporate trips to view selections from the Wallace archive. His library, manuscripts, typescripts, letters, notebooks, and ephemera (lists of words, envelopes, postcards) give students the opportunity to indulge this desire for more. Their desire isn’t always satisfied, however. Many want to see the handwritten drafts of a particular scene from Infinite Jest, to follow the trail of revisions and edits that led to the final magnum opus. They arrive to find that those pages aren’t ordered neatly as they appear in the novel or even collated by related scenes. The process of discovery, they learn, is going to be an arduous one. In other cases, though, the collection delights more readily. Wallace was an avid letter writer and corresponded with authors whose papers the Ransom Center also holds, most notably Don DeLillo’s. Reading this dialogue, students see him as a person with aspirations, doubts, passions, and fears. Novice writers seek his advice, surely, but he also seeks guidance from his role models, especially as the clamor that comes with finishing one lauded project dies down and the grueling labor of creating “the next best thing” begins. I believe Wallace’s published works are deeply human, but they’re also off-puttingly alien for some readers because of their headiness and seemingly deliberate impenetrability. The Ransom Center’s collection shows that the finished projects come from an unfinished mind that was questioning, struggling, inventing, and exploring. It shows that Wallace was a writer because he was a painstaking and adoring reader; it shows the intimacy between the words he consumed and those he produced.