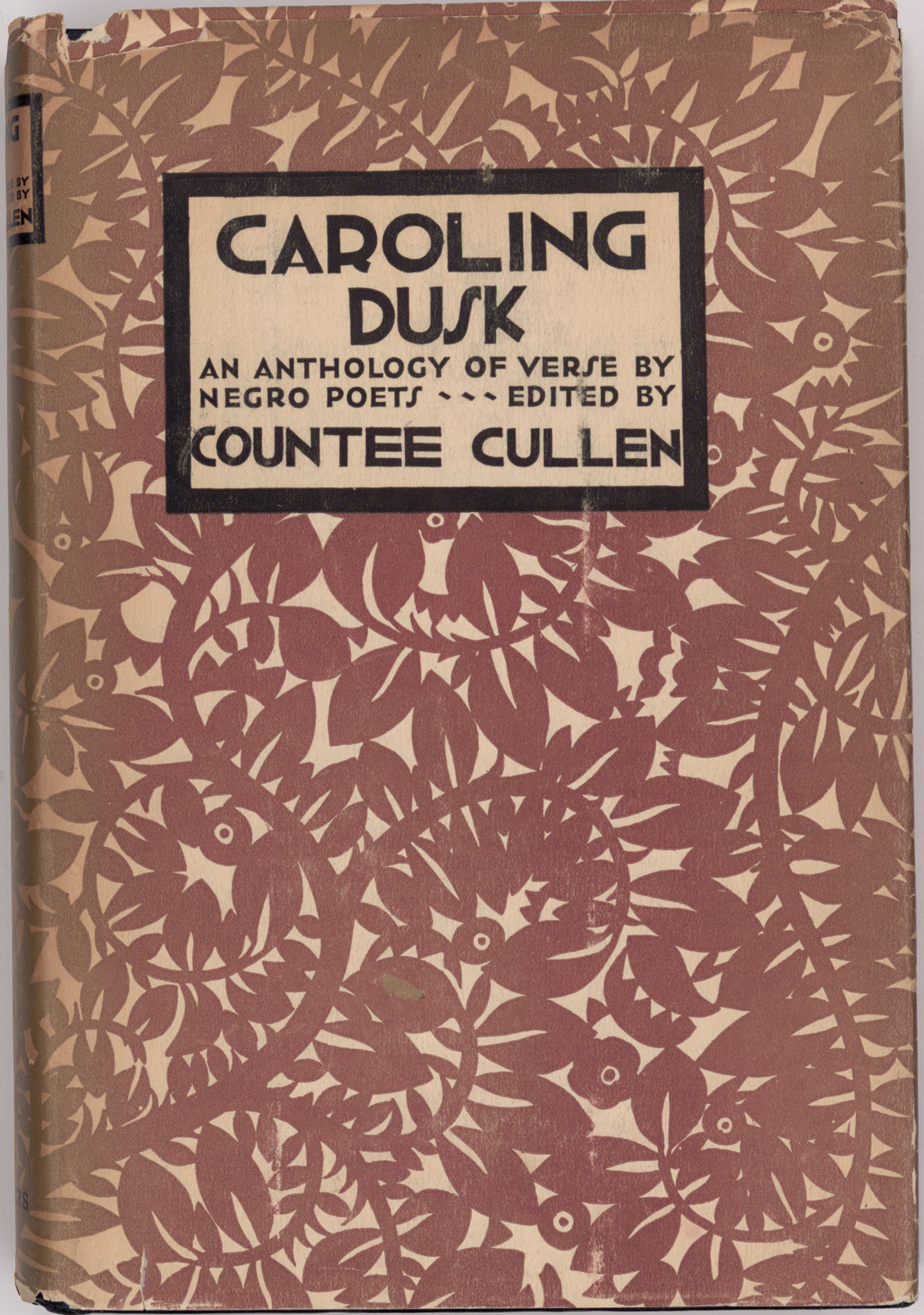 This is the last of a three-part series of posts highlighting the influence and work of Countée Cullen, a poet and editor during the Harlem Renaissance.

Cullen used the special issue of Palms as a springboard for a book-length anthology. Caroling Dusk, An Anthology of Verse by Negro Poets, was published by Harper & Brothers in 1927 and featured decorations by artist Aaron Douglas.

In a November 4, 1926, letter to Idella Purnell, the editor of Palms magazine, Cullen linked the special issue of Palms and his anthology:

The Negro Poets’ issue of PALMS has met with such a fine reception that I am going to undertake the editing of an anthology of Negro verse which Harper’s has promised to publish for me. I shall probably want to use all the material which appeared in PALMS, of course, with due acknowledgement. May I know whether there is any objection to this?

Stone did not object to the project, and Cullen reprinted six poems from Palms in Caroling Dusk.

Caroling Dusk provided Cullen with the opportunity to reaffirm the philosophy of race and poetry that Langston Hughes had so publicly critiqued in “The Negro Artist and the Racial Mountain.” In the biographical notice prefacing his own poetry Cullen writes of himself:

He has said, perhaps with a reiteration sickening to some of his friends, that he wishes any merit that may be in his work to flow from it solely as the expression of a poet—with no racial consideration to bolster it up. He is still of the same thought.

Even the anthology’s carefully selected subtitle reflects this approach. In contrast to previous anthologies that contained “Negro poetry,” Cullen created an “anthology of verse by Negro poets.” He addresses this important difference in his introduction: “the attempt to corral the outbursts of the ebony muse into some definite mold into which all poetry by Negroes will conform seems altogether futile and aside from the facts.” In Caroling Dusk, Cullen sought to showcase the “lights and shades of difference” in poetry by “Negro” writers, and he intentionally omitted dialect poems as a genre in “decline.”

Cullen included poems by all of the writers he had featured in the special issue of Palms, adding works by 23 additional poets including Fenton Johnson, Claude McKay, and James Weldon Johnson. From his own oeuvre, Cullen included nine poems that represented the range of his poetic expression: “Lines of Our Elders,” “I Have a Rendezvous with Life,” “Protest,” “Yet Do I Marvel,” “To Lovers of Earth: Fair Warning,” “From the Dark Tower,” “To John Keats, Poet, at Springtime,” “Four Epitaphs,” and “Incident.”

Caroling Dusk was well-received and recognized as innovative among anthologies of the period. In the May 1928 issue of Poetry: A Magazine of Verse, critic Morton Dauwen Zabel hailed Caroling Dusk as “rightly tr[ying] not to displace but to supplement the somewhat more classical selections of Paul Laurence Dunbar and James Weldon Johnson” and noting that the “book will probably be of most service to those who wish to see the more recent experimental work of the young Negroes.” In a review in the American Journal of Sociology, noted sociologist Robert Park similarly observed that Caroling Dusk was unique in its attempt to “direct attention to some of the younger and less-known Negro writers.”

For modern readers, Cullen, the full range of his poetry, and his work as an editor provide a more expansive and nuanced understanding not only of the Harlem Renaissance but also of American poetry more broadly.