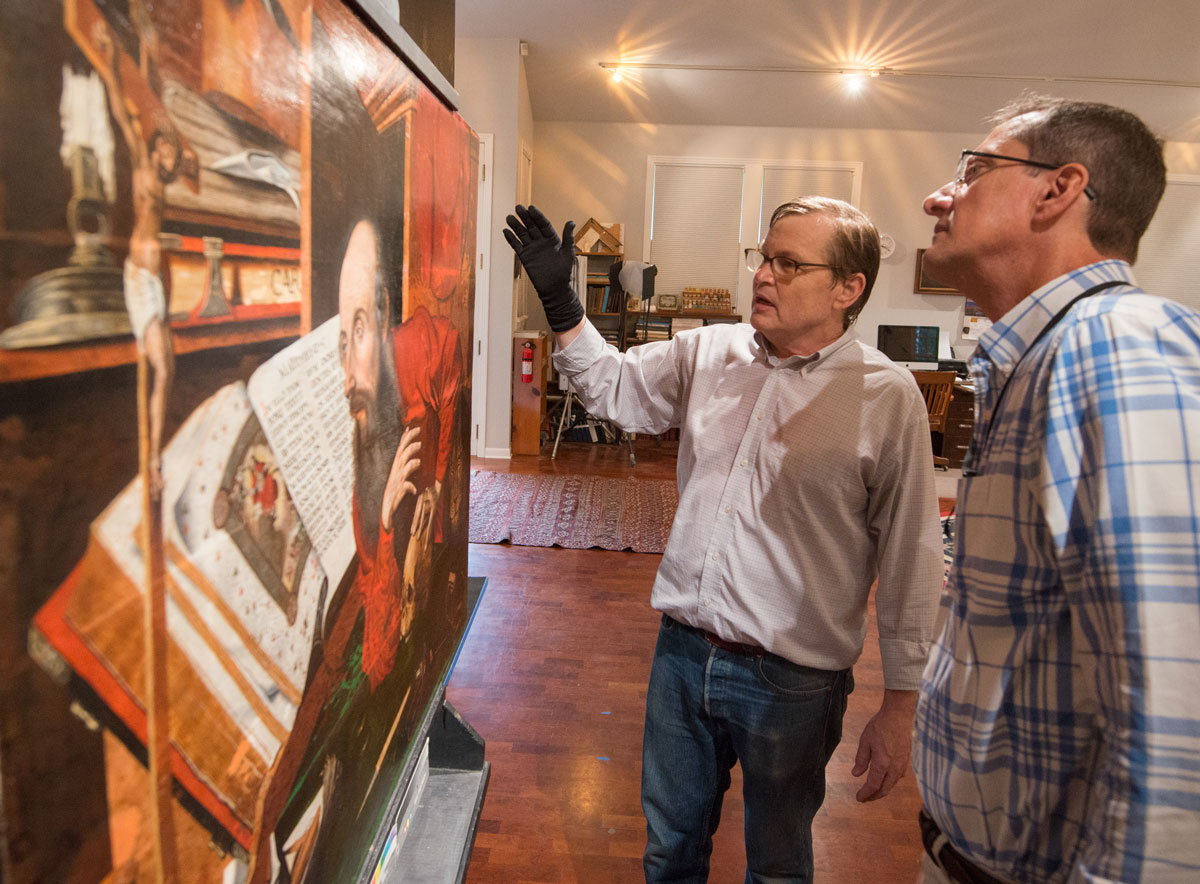 In addition to two portraits by the artist Mary Beale, the Ransom Center’s old master painting St. Jerome in His Study will be exhibited in the newly renovated galleries of the University’s Blanton Museum of Art from February 2017 to February 2019.

The Center’s loan of this painting to the Blanton resulted in a collaborative effort to undertake its conservation treatment. The Center also commissioned a custom-built frame in a style appropriate to the historical period of the painting.

In June 2016, Mark van Gelder, owner of Art Conservation Services of Austin, assessed the condition and treatment needs of St. Jerome in the Center’s conservation labs. With treatment now completed, Ellen Cunningham-Kruppa, Associate Director for Preservation and Conservation at the Ransom Center, interviewed van Gelder about the process.

What was the condition of St. Jerome, and what do you think contributed to its pre-treatment physical state?

First of all, it’s important to mention that the painting was already in essentially this same condition when it came to the Ransom Center a number of years ago. Though it exhibited a number of
pre-existing condition problems, it has been in the stable and protective storage environment at the Center since its arrival in Austin. The most pressing problem was the numerous areas of
lifted “blisters” of paint. The picture was painted on a wood panel made from four oak planks glued together along their sides, a common type of painting support used in Northern Europe at the
time. The downside of painting on wooden boards is that the wood continues to react to its environmental surroundings. As humidity levels and temperature rise and fall, the wood swells, shrinks, and warps. The dried paint, being much less flexible than the wood, then cracks, as well as sometimes detaches.

In addition to the areas of lifted paint, many previously damaged areas had been variously restored during three or more past treatment campaigns, with less than ideal results. Discolored and unevenly glossy old varnishes were also present on the painting’s surface, distorting the appearance of the artist’s original colors and producing a distracting “blotchy” quality to the image in many places.

What measures did you take to remedy the painting’s condition issues?

My first goal was to stabilize the lifted areas of paint and secure them back down into position. A dilute, warm glue made from the swim bladder linings of sturgeon (a by-product of the caviar industry) was applied through small squares of teabag tissue. One small area of the painting’s surface was treated at a time. The next treatment phase involved reducing the discolored, old varnishes and previous re-touchings—to the extent possible without risking damage to the original painting. This was also done one small square at a time, using carefully tested and monitored solutions on cotton swab. An initial coat of protective varnish was then applied, effectively isolating the paint surface from the infilling materials that would be added next. I re-photographed the painting to document its cleaned condition before any new compensations for surface damages were added.


Did you encounter any “surprises” in your treatment of the painting?

There were a number of surprises! The first occurred while I closely examined one of the pre-treatment photographs I took with light reflecting off the painting’s surface. Details in the painting stood out strikingly. For example, on St. Jerome’s open lens case on the table, there are raised “fish scale” patterns which were probably more visible when the painting was new, but which I hadn’t noticed at all before. The “specular light” photograph also revealed three areas of the painting that stand out in bold contrast to the surrounding surface, namely the raised “clover leaves” on the border of the illuminated book page, the vertical lines in the door panel, and the lion’s eyes.