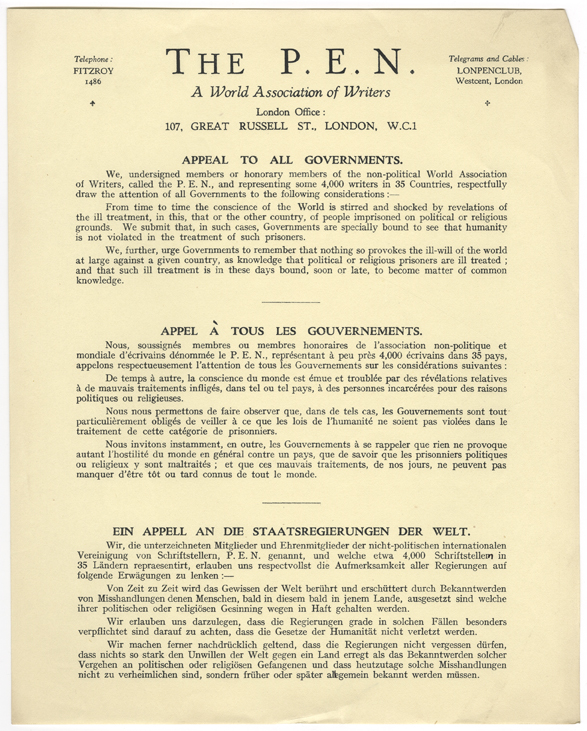 The Harry Ransom Center has received a grant from the National Endowment for the Humanities (NEH) to support a two-year, $195,000 project to arrange, describe, selectively digitize, and share its PEN records. The Ransom Center holds the archives of PEN International and English PEN, who share the mission of promoting literature and defending freedom of expression around the world.

The NEH grant-funded project “Writers Without Borders: Creating Global Access to the PEN International and English PEN Records” includes cataloging and creating an online finding aid for the records. Spanning from 1912 to 2008, the collection contains administrative records and details international meetings, work of committees and undertakings of the organization.

To expand access to the records, 4,400 images will be digitized and made freely available online. Digitized images will include PEN newsletters, minutes, reports, scrapbooks and ephemera in the archive.

A portion of the digitized images will be selected for the creation of an online teaching collection webpage, providing teachers and students the opportunity to engage with archival materials. Topics and teaching modules will explore global refugees and writers in exile, free speech, writing about World War II, the global Cold War and international human rights.

“These archives offer unique insight into human rights crises and document important cultural, historical and literary debates of the last century,” said Steve Enniss, director of the Ransom Center. “Increasing and broadening access to these materials offers an unparalleled resource for research. Because PEN International is not limited to a particular nationality or writing genre, no other archives of literary organizations offer similar content or comparable scope and chronology in a public repository.”

Founded in 1921 to foster friendship and intellectual cooperation among poets, essayists and novelists, the association quickly shifted focus as its membership challenged the rise of fascism across Europe. Today, the association self-identifies as the “world’s first human rights organization,” defending freedom of expression and promoting literature through programs implemented by its global network of 149 centers in more than 100 countries.

“At this time when freedom of expression is in peril all over the globe, the support from the NEH to safeguard PEN’s extraordinary history in defending literature and the right to speak and write freely is vital,” said Jennifer Clement, president of PEN International. “Over the past 100 years in every place where censorship has tried to quiet voices, PEN has worked to support both the individual and collective truth.”

Nearly a century after its founding by British writer, poet and playwright Catharine Amy Dawson Scott, PEN has left an indelible mark on international politics, culture and literature, with a membership that now extends to journalists, publishers and editors.

“This project will make PEN’s unique literary archive available for everyone,” said Jo Glanville, director of English PEN. “It will be a remarkable resource for anyone researching the history of literature and freedom of expression in the 20th and 21st centuries, from the modernists’ involvement in the early days of PEN to the new frontline in the battle against censorship, including the campaign for Salman Rushdie.”

The Ransom Center will complete the project by September 2019.

What’s in the PEN archives?

Writers without borders: The power of PEN