Tim O’Brien’s The Things They Carried is a ground-breaking meditation on war, memory, imagination, and the redemptive power of storytelling. The book depicts the men of Alpha Company: Jimmy Cross, Henry Dobbins, Rat Kiley, Mitchell Sanders, Norman Bowker, Kiowa, and the character Tim O’Brien, who survived his tour in Vietnam to become a father and writer. The Harry Ransom Center holds the author’s archive. 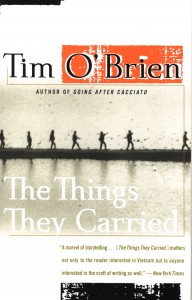 Two of the most poignant stories in The Things They Carried are “On the Rainy River” and “Field Trip.” “Rainy River” portrays a young O’Brien, weeks removed from his college graduation, leaving his home in Worthington, Minnesota, for a fishing outpost on the Canadian border, agonizing over whether to report for Army induction or to live as a draft dodger. In “Field Trip,” O’Brien returns to Vietnam many years after his tour of duty as a foot soldier and radio operator, now with his ten-year-old daughter, Kathleen, as he seeks some measure of peace from the traumatic memories of a close comrade’s death. Because these stories are removed from the daily realities of the war, they tend to be more accessible to O’Brien’s audience. But in the original version of Things, readers would have turned the page to discover that neither of these stories is “true.”

Throughout The Things They Carried, O’Brien famously distinguishes between “happening-truth,” or an accurate and verifiable account of historical events, and “story truth,” or readers’ genuine experience of the story, even if the details are invented. The book blurs the lines between fiction and truth even further in its dedication to a group of soldiers who turn out to be fictional characters throughout the rest of the book, and in the appearance of “Tim O’Brien” in several stories, a figure who seems very similar to, but not quite identical with, the author. Many readers, and most of my students over many years of teaching the book, take the circumstances of “Rainy River” and “Field Trip” to be at least more or less true (in the conventional sense): they assume that O’Brien made some sort of trip away from his family while deciding whether to honor his draft notice, even if not precisely the one portrayed here, and that O’Brien and his daughter went back to Vietnam years after the war, even if, again, the “real” version of that event differs from its fictional representation. (That is, they take these stories to be relatively conventional instances of fiction based on episodes from the author’s life, even if contained within a much more complex metafictional narrative.)

In fact, while O’Brien did agonize about serving in a war he vehemently opposed, he never made any trip like the one in “Rainy River;” his worries played out entirely in Worthington. And, while O’Brien did return to Vietnam in 1994, accompanied by his then girlfriend—this trip is the subject of his well-known piece for The New York Times Magazine, “The Vietnam in Me”—his daughter did not go with him, because he had no children. In the typescript for the book that O’Brien sent to Houghton Mifflin, the chapter titled “Good Form,” which discusses O’Brien’s interactions with the (ostensibly real) veteran Norman Bowker, also included a long passage disavowing any happening-truth in “Rainy River” or “Field Trip,” or in various other events in the book, such as O’Brien’s empathetic imagination of the Vietnamese life he has ended by shooting an enemy soldier on patrol, or a postwar visit from his former company commander, Jimmy Cross. Here is a portion of that early version (I have retained the cross-throughs as they appear in the copy at the Harry Ransom Center):

To my knowledge, at least, I never killed anyone.

Jimmy Cross never visited me at my house in Massachusetts, because of course Jimmy Cross does not exist in the world of objects, and never did. He’s purely invented, like Martha, and like Kiowa or Mitchell Sanders and all the others.

I never ran way to the Rainy River. I wanted to—badly—but I didn’t.

I came across this typescript during a month-long fellowship at the Ransom Center, poring through as many of O’Brien’s papers as I could, and have written about it more extensively in How to Revise a True War Story: Tim O’Brien’s Process of Textual Production (University of Iowa Press, 2017). Ever since my first encounter with this aspect of O’Brien’s papers, I have been fascinated by the question of how readers would interact differently with the book if passages like this one (and another deleted chapter, “The Real Mary Anne,” which takes the opposite tack of insisting that the heroine of “Sweetheart of the Song Tra Bong” was, against the odds, an actual person) had been retained. Or, to put that counterfactual question another way: how might O’Brien’s real readers have responded to the version(s) of The Things They Carried that could have been published, but weren’t? We can start to think through those questions by looking back further than the typescript, to the magazine versions of several chapters that appeared before the book.

While the relationship between fiction and truth is questioned elsewhere in The Things They Carried for readers to at least reasonably doubt the veracity of stories like “Rainy River” and “Field Trip,” some of O’Brien’s original readers would have had no such contextual cues, as they found these stories in magazines. “Rainy River” appeared first in two periodicals: Macalester Today, O’Brien’s college alumni magazine, and Playboy, which paid $5,000, the largest magazine check of O’Brien’s career to that point. Macalester Today heightens the sense of autobiographical reality with its subheading, “A writer remembers the summer of 1968, when he found himself in desperate trouble. A month after graduating from Macalester, he was drafted to serve in Vietnam.” But O’Brien’s own introduction to the story immediately undercuts this impression, as he explains his choice to use a character who shares his name but is otherwise “almost entirely invented”: “Personally, I can’t see that it matters in the least—what counts is the artifact, the work itself—but nonetheless, with this book in particular, people seem interested in knowing what’s ‘real’ and what isn’t. As with all fiction, the answer is simple: if you believe it, it’s real; if you don’t, it isn’t.” O’Brien here deftly sidesteps the question of what’s “real,” at least as most of his readers would understand it, or why they might be especially concerned about such issues with this book, for an answer that bleeds into his more developed sense of “story truth” in the book. But given the context of an alumni magazine, we might easily assume readers who are at least relatively predisposed to take the events in “Rainy River” as closer to “real” than they are, based not only on the question of whether they “believe it,” but also on the types of stories one expects to find in this venue.

“Field Trip” appeared in the August 1990 issue of McCall’s, part of the magazine’s “Summer Fiction Special,” with a readership presumably attuned to the father-daughter relationship as much as the memories of wartime trauma. Indeed, the pull quote on the story’s first page highlights O’Brien’s supposed daughter as if she were the story’s central consciousness: “Kathleen was only ten, but her father wanted her to understand Vietnam, the place where he’d lost so much, and to witness what it was he’d find there.” McCall’s readers, had they encountered a version of the book with the passage above from “Good Form” intact, might have been especially surprised, even dismayed, to discover Kathleen’s fictionality. Of course, that’s often the point in The Things They Carried, as in the famous ending of “How to Tell a True War Story,” when the reader learns that the savage killing of a baby water buffalo was an overtly fictional episode. Identifying with O’Brien as a father, and/or with his young daughter’s attempt to make sense of a war she doesn’t understand, only to have the fictional rug pulled out, seems on its surface like the same kind of effect that the book goes to considerable lengths to create in its other chapters.

So, why did O’Brien remove these elements of The Things They Carried? That is, why did he render the narrative less overtly metafictional, and how does this revision impact readers of the editions actually published? Part of the answer is that O’Brien’s editor at Houghton Mifflin, Camille Hykes, felt the collection would be stronger without its tricks exposed quite so much. “Why should the magician pull up his sleeve & tell us—Look, this is where the birds come from—when really, deep down, we knew it anyway?” she wrote to O’Brien. And O’Brien himself clearly decided this version of the book would more subtly, and more effectively, generate its metafictional effects.

But I’m not so sure. Much of the real power of The Things They Carried, for me, comes precisely from the process of building emotional investments in its characters, and then rebuilding those relationships on different terms once we have been told, in no uncertain terms, that the “people” we have come to care about don’t “exist in the world of objects.” We probably knew it all along, as Hykes suggests, but the best magic tricks, after all, are the ones where you know it’s an illusion but still can’t quite figure out what’s really “true.”

John K. Young is a professor of English at Marshall University and author of Black Writers, White Publishers (2006); Publishing Blackness, co-edited with George Hutchinson (2013), and How to Revise a True War Story (2017). His fellowship at the Ransom Center was supported by the Norman Mailer Endowed Fund.