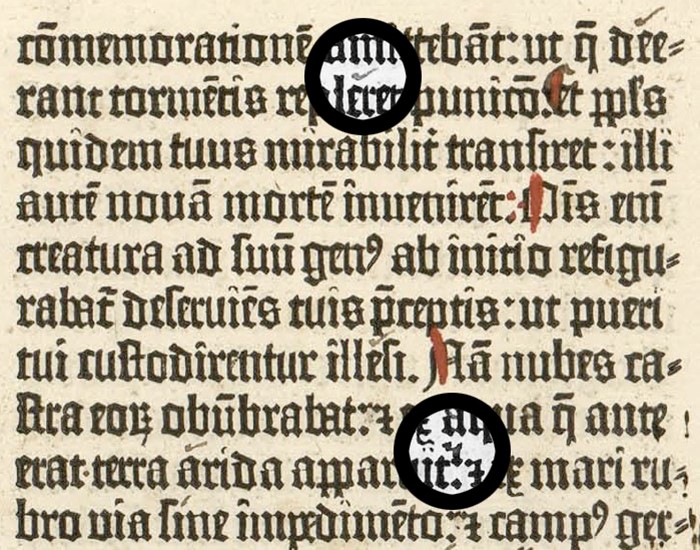 As many readers of this blog will know, Johann Gutenberg and Johann Fust’s Biblia latina (Mainz, 1454–1455) represents the first substantial book printed from moveable type on a printing press. Without question, it is a milestone in information technology. And yet, it is important to remember that Gutenberg and his business partner were operating within an existing book trade and catering to highly literate customers who, for the most part, already had a need for the very book that the two men were selling. When undertaking the first major test of their new technology, Gutenberg and Fust minimized risk by choosing a title—arguably the title—for which there would be a guaranteed and sufficiently wealthy audience; they knew very well that the Catholic Church and its religious communities needed Bibles. In fact, the first documented account of the Gutenberg Bible shows that their decision to print Scripture was a savvy one. Reporting on what he had seen at the Frankfurt Book Fair early in 1455, the future Pope Pius II claimed that the entire edition of between 158 and 180 copies had sold before Gutenberg even finished printing it.

In Mainz, Gutenberg and his team were the progenitors of a technology, not of a market for books, and while it can be tempting to see the printing press as a harbinger of modernity, it is difficult to find a book that is more thoroughly medieval than the Gutenberg Bible in terms of its appearance, early ownership, and use. And this was by design. Though produced in a new way, the success of Europe’s first major book in print depended on its ability to perform like what was already out there: manuscripts.

We recently turned the pages of our copy of the Gutenberg Bible. In the opening now on display, we see that decorative initials and other rubrication have been added by hand. Medieval readers were accustomed to Bibles that incorporated color both for decoration and to aid reading, and Gutenberg worked to oblige those readers, even though the printing press itself was not entirely up to the task just yet. Elsewhere in our copy, there is evidence that Gutenberg experimented with integrating red text with black, but he clearly found it difficult and gave up on the ambition early in the process of printing his book. Instead of insisting on a completely black-and-white text, though, he elected to enable the conventions of earlier Bibles by leaving blank spaces for a manuscript rubricator to fill in later. (Can you spot which parts of the text are in Gutenberg’s print and which are in manuscript? Hint: scribal work in this copy includes some of the black text.)

Additionally, there is evidence here and throughout the two volumes that Carthusians owned this Bible and that it formed an integral part of their regular worship: letters and numbers in the margins of these pages from the end of Wisdom and the beginning of Sirach (Ecclesiasticus) were added by hand to specify the readings for weekdays—P[rima], S[ecunda], and T[ertia]—and for Sundays—I–VIII. Groups like the Carthusians needed Bibles that could be easily read aloud in a communal setting, and Gutenberg and Fust surely intended for their large book to cater directly to this need. The same report that specifies the number of copies Gutenberg printed also remarks that the text of his Bible was large enough to be read without the aid of glasses, a feature that surely would have been attractive to any Church’s designated lectors (readers).

Later, near the beginning of Ezekiel (fol. 429v), a scribe has added instructions to the lower margin of our copy on how to use a more complicated set of letters and numbers than appears elsewhere in the Bible:

When the Dominical Letter is A, follow the weekday readings marked by A, B, and C. For other times, follow those marked by P, S, and T; and on Sundays, follow the numerals I, II, III, and so on; the sacristan [a church officer] must take care that the lectors make no mistakes in determining the readings.

This means that, in years when New Year’s Day falls on a Sunday, the three daily readings for weekdays are specified in the margin by the letters A, B, and C. For other years, weekday readings are designated instead by P, S, and T. And for all Sundays, readings are marked by the Roman numerals I–VIII, as usual.

In addition to the marginalia indicating what to read, there is punctuation within the biblical text indicating how to read it. Beginning with the very first line of the pages displayed here from Volume II, there are numerous accent marks, and, from the ninth line onward, the top dot of some colons has been transformed into what looks like a small “7.” The punctuation mark that results from this modification, which is known as the “punctus circumflexus” or “flexa,” instructs readers to allow a medium-length pause before continuing. For the community that made these customizations, it was important not only that the Bible be read aloud but also that it be read aloud well. The origins of print, it turns out, were at least as much in community and orality as they were in private, silent reading.