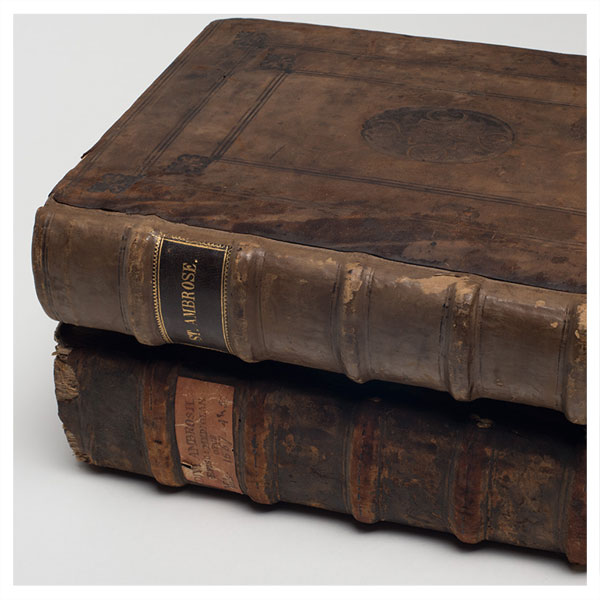 In May, the Ransom Center acquired two volumes of Ambrose’s Opera (or Works) in Latin. The edition was published in Basel in 1567. What is most compelling about these particular books, however, is less the writings of the Church Father, as such, and more their story as books.

In 1616, the widow Anne Harington leveraged land owned by her late husband, John, 1st Baron Harington of Exton, to establish a fund for the relief of the poor throughout the county of Rutland, where she lived. At roughly the same time she did this, she also used her resources to establish a small library in the parish church of Oakham.

According to the antiquary James Wright, who wrote in 1684 that her charity “ought to be better remembered,” she gave around 200 volumes “for the use of the Vicar of that Church, and accommodation of the Neighbouring Clergy.”

Wright also notes that these books have been “curiously bound, the Covers adorn’d with several guilded Frets (commonly call’d the Harringtons Knots) and Ex Dono Dominae Annae Harringtonae Baronessae Printed and pasted in the Title Pages.”

Although they indeed were made in England, the bindings of the Ambrose now at the Ransom Center predate the gift and lack the custom decoration Wright describes. Nevertheless, a printed label that proudly proclaims Harington’s gift—and her status as both Lady and Baroness—remains prominent in each volume.

(As it turns out, only eight of the surviving Oakham books actually have Harington-knot bindings. Wright appears to have overstated the case, as he may also have done when estimating the size of the donation at 200 books: we currently know of fewer than 125 volumes.)

So, not only did Anne Harington’s philanthropy provide a group of provincial clergy with food for thought, it also occasioned one of the earliest donor labels (or plates) made for an English woman. Harington was proud of her giving and wanted readers to know about it.

She and her daughter, Lucy Russell, Countess of Bedford, also gave more than 200 volumes to Sidney Sussex College at the University of Cambridge. But while a number of the Cambridge books remain in Harington-knot bindings, it appears that Harington inserted her donor plate only in the Oakham books.

The Ransom Center volumes also help exemplify a shift in the ways readers and libraries stored their books.

According to Wright, when Harington donated the books themselves, she built “a convenient place” for them in Oakham’s church. From 1616 until the library was moved to the University of Nottingham in 1980, they appear to have been stored in two large oak presses. Each press had three shelves that could hold the large folios that made up the bulk of Harington’s gift.

Inscriptions at the top of the fore edges show that the works within are indeed by Ambrose and that the five parts of the edition have been spread across the two bound volumes. There are also numbers—”10″ and “11”—that once marked the place of these books on a shelf.

Anne L. Herbert, who has written on the Oakham Parish Library, observes that

Several volumes bear the trace of one number written over an earlier, fainter one [which is the case with the Ransom Center Ambrose]. The numbers used are between 1 and 29, the lower numbers occurring more frequently, up to a maximum of six times; each of the six shelves [between the two presses] presumably bore a parallel series of numbers.

For these inscriptions to be read, the books would have been shelved with their edges—not their spines—facing out. Alien to us now, this practice emerged in medieval libraries that chained books to shelves to prevent theft.

On shelves in the Hereford Cathedral Library, one end of the chain passed through a bar running parallel to the shelf. The other end attached to the edge of one of the book’s covers.

So that chains did not rest awkwardly under books or between the covers of adjacent books, spines faced inward, and edges outward. Shelving books with the fore edge out became standard, even for libraries like the one in Oakham’s parish church that never used chains.

Examples of spine-out shelving become common during the sixteenth century. But the practice does not prevail until well into the next.

At some point the library stored in the Oakham presses—Harington’s library—bowed to the spine-out shift. At some point after the books left the parish library, the first volume’s spine cover was replaced. The second’s original cover is intact and bears a paper label from its time at Oakham.

It is hard to precisely date the handwriting. It is likely that the books had been turned around by the end of the seventeenth century, less than 100 years after they first arrived.

A version of this story appears in the Fall 2017 Ransom Center Magazine.

A good history of book shelving can be found in Henry Petroski, The Book on the Bookshelf (New York: Knopf, 1999).

And the earliest account of the Harington donation is in James Wright, The History and Antiquities of the County of Rutland (London: Bennet Griffin, 1684).

Pratt oversees research, access, and interpretation of the Ransom Center’s pre-1700 books and manuscripts. He holds a Ph.D. in English from Yale University, with specializations in the literature and culture of the sixteenth and seventeenth centuries, bibliography, and the history of the book.