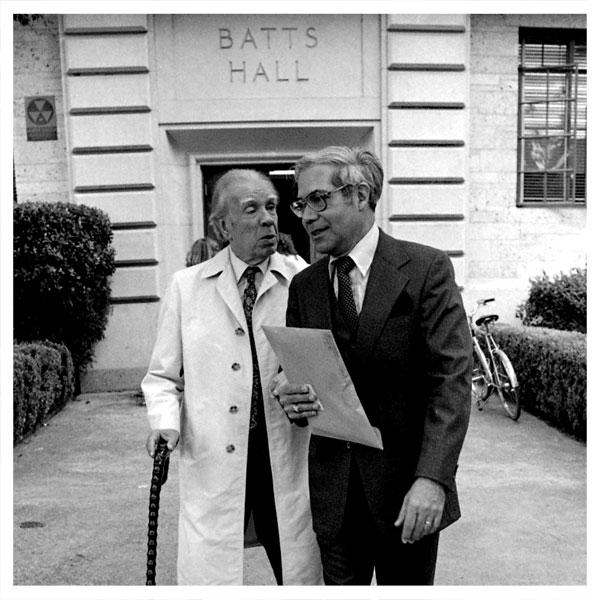 How did an Argentine poet like Jorge Luis Borges end up reading and writing about Old English poetry?

Borges had learned English as a child with his English grandmother in Buenos Aires, and voraciously read English books in his father’s library. In mid-life he gravitated to poetry written in our modern language’s medieval Germanic forebear: poems like the heroic epic of Beowulf and forlorn elegies like the Seafarer and Wanderer.

But English learned chatting with your grandmother or reading Edgar Allan Poe won’t help much with Old English. Here, for instance, is how Borges encountered Beowulf: in Old English, printed in An Anglo-Saxon Reader in Prose and Verse (1879) by Henry Sweet.

Like most English readers today, Borges would have found this excerpt of Beowulf incomprehensible. But he got to work trying to understand it.

In 1958, when he was director of the National Library of Argentina, Borges pored over the Old English in Sweet’s Reader with a small group of students on Saturday mornings.

In Borges: A Life, biographer Edwin Williamson describes the poet’s thrill in working through Old English word by word, dictionary at his side, during these weekly study sessions: “His first encounter with the language produced a strange exhilaration—he sallied forth into the street with his students declaiming a passage they had succeeded in deciphering that morning.” Borges himself describes the thrill of learning Old English in a poem, “Al iniciar el estudio de gramática anglosajona” [“Embarking on the study of Anglo-Saxon Grammar”]. Soon enough, the study of Old English had captivated Borges as much as the poetry itself had.

Sometime around 1958, Borges wrote an essay about that thrill one feels in the rediscovery of an ancient language belonging to a distant past, in a distant land. He imagined too how this labor of love could end in heartbreak. The essay retells the story of Grímur Jónsson Thorkelin, an Icelandic scholar who rescued the Beowulf manuscript from obscurity in London’s British Library.

Thorkelin took decades to publish his research, and when he did, he was crushed by some harsh criticism of his scholarly missteps (of which there were many). This essay, called “Thorkelin y el Beowulf,” closes with Borges wondering whether and how the devastated Thorkelin might be loving the poem still, in the afterlife:

Such is the singular story of Thorkelin and his ill-fated passion. Death took his body in 1829, but we are free to imagine a continuation on a different plane. Thorkelin, in a Christian heaven, talking with the poet of Beowulf; Thorkelin in a Platonic heaven, gazing at the eternal archetype of Beowulf. . . . We’re free also to think in a Pythagorean way, that Thorkelin inhabited other bodies and that today, in some bookstore in Buenos Aires, he turns the pages of this chanced-upon book, sees the unfamiliar word Beowulf and feels, just barely, the beginning of some vague disquiet—

This is an example of what David Foster Wallace called a “Borges trademark”: the “distant interrogative ending” that dangles infinite implications before the reader: What if Thorkelin is spending eternal bliss talking to the Beowulf-poet? What if his soul, somewhere, is just now re-embarking on an ill-fated passion for Anglo-Saxon? What if that’s you?

Borges, in the end, would never publish this essay for an Argentine Thorkelin to chance upon in a Buenos Aires bookstore, but it survives in manuscript in an unassuming notebook in the Borges papers at the Ransom Center. It is written by his mother, Leonor Acevedo, as his growing interest in the study of Old English coincided with the onset of his blindness.

Borges came to the University of Texas as a visiting professor in 1961, a short time after this essay’s probable composition. While in Austin, he developed a deeply-felt affection for Texas. (Eric Benson tells this story better than I could in his essay “Forgotten but Not Gone.”)

Borges struck up a friendship with Rudolph Willard, a resident Anglo-Saxonist with whom he could chat about Old English poetic devices like the kenning and gossip about the field’s foremost scholars.

Borges would eventually write a short story, “The Bribe” [El Soborno], populated by fictionalized Old English faculty members in UT’s Parlin Hall who try to outmaneuver one another in the small world of their profession.

His coauthored introduction to medieval Germanic literatures, written after his stay in Texas, recommends a translation of the Icelandic Edda by UT’s then resident scholar of Old Norse, Lee M. Hollander.

The University embraced Borges, too; campus flags flew at half-mast upon his death in 1986. Borges, for his part, put a line from the Old English Battle of Maldon on this tombstone: “And ne forhtedon na,” “do not fear at all.”

Borges’s fondness for Texas and his love of the study of Old English got all tangled up in one another in that fall semester of 1961. It’s fitting, then, that “Thorkelin y el Beowulf” would find a home at the Ransom Center.

Joe Stadolnik is a Junior Research Fellow at the Institute of Advanced Studies, University College London. His research explores scientific language in the literary and public culture of medieval England.