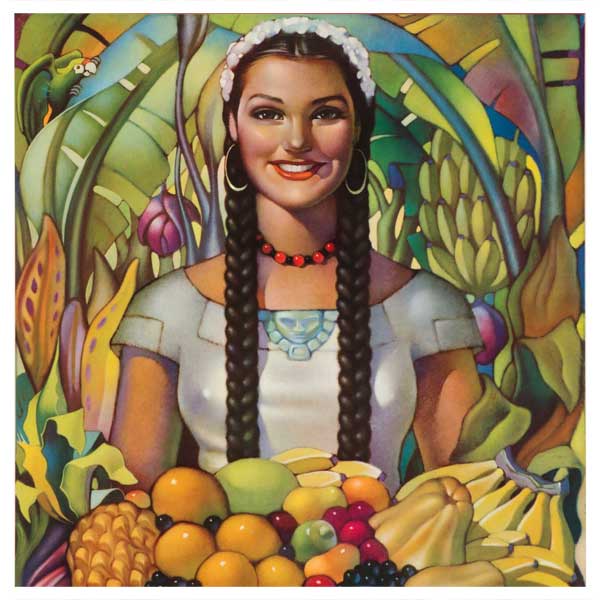 The Ransom Center’s current exhibition Mexico Modern: Art, Commerce, and Cultural Exchange, 1920-1945 showcases Mexican art immediately following the Mexican Revolution in 1920 to the 1940s when it entered the American mainstream.

Visitor Services Manager Monte Monreal shared insight about the inspiration and creation of one of the items available for sale at the Ransom Center in conjunction with the exhibition: a collection of postcards.

The images on the postcards are adapted from travel materials found in the collections and on display through January 1. They reflect a moment after World War II when the Mexico Tourist Association and other tourism industries sought to evoke pre-Columbian Mesoamerica while simultaneously crafting an exoticized, tourist-friendly Mexico.

With a variety of images to choose from, Monreal says he focused on the ones that most represented what the curators of Mexico Modern want to relay with the travel materials in the exhibition.

“You have some materials that are very broadly and stereotypically Mexican,” he says, “conforming to the idea being sold to the world by the Mexican Tourist Association of this exotic, inviting place. Then you have others that are meant to evoke ‘traditional’ Mexico.”

In the pack, these stereotypical images—of a cactus wearing a sombrero with a guitar on one arm and a Mexican blanket on the other; of beautiful women smiling, surrounded by abundant flowers and fruit—exist alongside quieter images of colorful architecture and cityscapes. Monreal selected ones with strong visual appeal.

The images exist in striking contrast to the political and social upheaval of the Mexican Revolution, which lasted from 1910 to 1920, and to the many changes taking place in the early decades of the twentieth century.

“From looking at the documents and archives, we know that the posters are meant to be cheap, tourist, commercial material,” he says. They promoted foreign tourism by selling travelers on an “escape” to a picturesque, romanticized Mexico.

Monreal took inspiration for the postcard pack from the popularity of vintage travel posters. He also looked to a successful postcard series done by the National Parks Service.

Staying with the vintage travel theme, the cover of the postcard pack was taken from the cover of a 1936−1946 vade mecum in the collections. A vade mecum, its name derived from the Latin phrase meaning, “go with me,” refers to a compact, portable travel guide. Including this element seeks to capture the period’s promotion of a journey through Mexico.

The postcard pack is available for purchase in the store for $10.