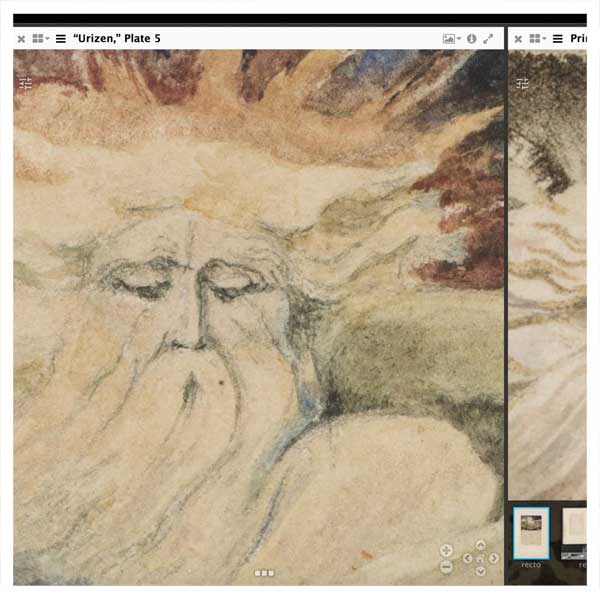 IIIF (pronounced “triple eye eff”) is an international collaborative effort across archives, libraries, museums, and other cultural heritage institutions to define standards for describing and delivering images across the web.

The Center’s adoption of IIIF means that its images and descriptive metadata are now instantly sharable with other IIIF-enabled digital image collections such as the British Library, the Getty Museum, and the Yale Center for British Art, to name just a few.

The interoperability inherent to IIIF allows for digital image repositories to share image content across (formerly) incompatible or proprietary systems. This facilitates the viewing and study of hundreds of thousands of books, manuscripts, works of art, and other cultural heritage materials from around the world within a single, familiar interface.

In other words, researchers can bring together and examine materials virtually that are held by institutions that are often geographically remote from one another.

Along with IIIF, the Center has implemented the Mirador image viewer for the display of IIIF image resources. You can use Mirador to study a single image or compare multiple images side-by-side, including those from other IIIF-enabled institutions, within a single browser window. You can also view metadata, zoom deeply into an image, rotate images, or change contrast and brightness.

Ransom Center Curator of Art Tracy Bonfitto appreciates that Mirador allows users to zoom in closely to get a better sense for a work’s details, medium, and process, and to compare images from different institutions.

This screen shot shows how you can examine color variants across two different pulls of William Blake’s Urizen print. The print on the left is from the Ransom Center’s collection, shown next to a related work held by the Yale Center for British Art.

“Each of these relief etchings were hand-colored to very different effect,” she says. “Researchers can closely compare variations in the rendering of the open book and of Urizen’s face, for example, or consider the details of our unbound print, to which the text was never added, against a print that made up part of Blake’s Book of Urizen.”

Ransom Center Pforzheimer Curator of Early Books and Manuscripts Aaron Pratt says that as more institutions digitize their copies and make them available via IIIF, “it will be possible for textual editors to compare even more copies simultaneously in Mirador, greatly facilitating what has historically been difficult—and tedious—work.”

The works of the sixteenth-century English writer Thomas Nashe constitute an important milestone in the development of English prose, and the book collections here at the Ransom Center hold numerous early Nashe editions. We are especially lucky to have three copies of his polemical dialog, Have with you to Saffron-Walden (1596). Although print did help to make books more consistent, from copy to copy of a given edition, the process of getting books through the press almost always generated variants of one kind or another. Each letter, after all, had to be set by hand, and there’s a good chance that at least one correction had to be made each time a new set of pages was in the press.

Because Mirador can view multiple items at the same time, it has great promise when it comes to one of modern editors’ central tasks: collating copies, looking for these press variants.

In this screenshot showing the Center’s three Saffron-Walden copies, we can spot one such variation on the third line of the page: two of the Ransom Center copies begin the line with “dius” and one with “dent,” as in “compendius” and “compendent.” (Nashe’s current editors report that “compendent” appears in fewer known copies than “compendius” and is almost certainly the earlier setting, an error.)

“We are delighted to join the IIIF community in this way,” says Ransom Center Head of Digital Collections Services Liz Gushee. “The Center is committed to sharing our collections as broadly as possible and in finding new way to support scholarship.  IIIF and Mirador are exciting new tools that will facilitate discovery, creativity, and engagement with the Center’s collections and beyond.”