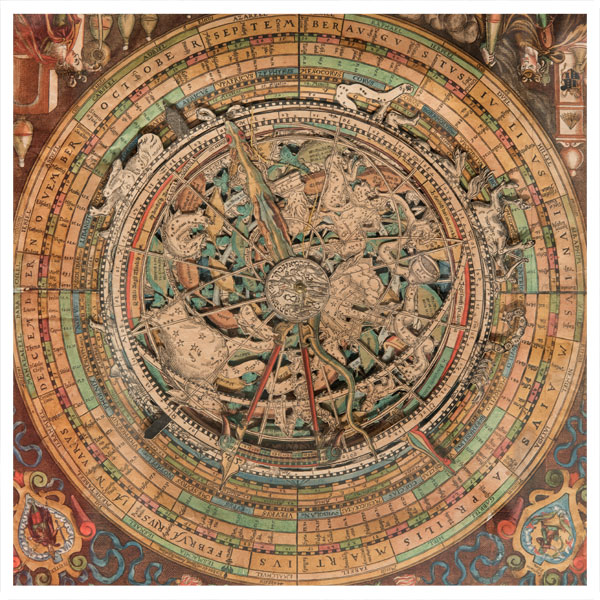 In early July 2017, a little over a month after I started as the new early books and manuscripts curator at the Ransom Center, a colleague informed me that the Kozmetsky Family Foundation and the Reissa Foundation had together made a generous donation to our collections: a stunning—and quite rare—set of eight large woodcut diagrams on paper, each featuring several layers of intricate rotating parts. The gift paperwork that preceded its arrival identified the set as the work of the German polymath and miracle doctor, Leonard Thurneisser zum Thurn (ca. 1530–ca. 1596). It’s hard to emphasize just how eager I was to examine it.

Thurneisser designed and printed the eight paper machines around 1575. Meant to accompany the second edition of his alchemical and astrological treatise, Archidoxa, they are tools to help readers determine the influence that the heavens would exert on their lives and the natural world. In essence, they are horoscope calculators. Rotating devices made of paper or parchment, like these, are known as “volvelles,” and the complexity and detail of Thurneisser’s make them a strong contender for the most elaborate ever produced. The set now at the Ransom Center has the added benefit of sumptuous hand coloring. We are grateful to the Kozmetsky Family Foundation and the Reissa Foundation for donating this remarkable publication.

Long before computer mice and touchscreens made it possible to manipulate complex digital interfaces with ease, volvelles were cutting-edge information technology, transforming the otherwise static surface of the page into an interactive vehicle for learning and knowledge creation. From Latin volvere, a verb meaning “to turn,” “volvelle” emerged in the Middle Ages as a noun that emphasizes the dynamic nature of new rotating devices that were being made of parchment and paper. First designed for inclusion within medieval manuscripts, volvelles and other interactive diagrams proliferated with the advent of print. Although their specific content can be difficult to understand without specialized knowledge, they readily demonstrate both the ingenuity of medieval and early modern thinkers and the technical skill of the printers and bookbinders who helped bring their ideas to broader audiences. The Ransom Center has long held examples of early interactive design in its extensive collections of early printed books, and the arrival of the Thurneisser devices has provided us with an opportunity to showcase a few of them in the gallery. They are on view in our exhibition Stories to Tell: Selections from the Harry Ransom Center until February 26, 2018.

Active during the later thirteenth and early fourteenth centuries, Ramon Llull (ca. 1232–ca. 1316) dedicated much of his prolific career as a writer to the goal of converting Muslims to Christianity, and in the process became one of the earliest—and most influential—volvelle-makers. A 1578 edition on display includes the volvelle he integrated into his Ars brevis. It combines the letters of a symbolic alphabet, which is designed to help readers contemplate important questions and arrive at Christian truths. For example, Llull writes that the combination “BCD” can help readers contemplate “whether any goodness is as infinitely great as eternity.” (Llull’s answer is “yes; otherwise all the greatness of eternity would not be good.”)

Decades before Llull finished the Ars brevis, Johannes Sacrobosco (ca. 1195–ca. 1256) wrote an important astronomical treatise, De sphaera. It was not originally designed with volvelles, however. It was only in Renaissance printed editions that publishers introduced interactive elements. Once they were introduced, De sphaera became what is likely the bestselling book to include volvelles; its success was in large part due to its use among university students. On display is the Ransom Center’s copy of a pocket edition from 1568, which includes the smallest volvelle I’ve seen: a dial of well under two inches helps to illustrate the ecliptic, the circular path that the sun travels on the celestial sphere as it passes through the twelve parts or “signs” of the zodiac. (In a Ptolemaic universe, the earth sits fixed at the center; other celestial bodies, including the sun, move around it.)

Interactive devices could also serve as decidedly practical tools. In his Cosmographia, for example, the sixteenth-century humanist Peter Apian (1495–1552) works to demonstrate the relationship between time-keeping and astronomical knowledge by incorporating a volvelle that converts the book into a complex—and complicated—sundial that could be held up to the sun and used to perform calculations. With the book in hand, readers could determine the current time of day, the time of sunrise and sunset, the duration of dawn and dusk, as well as their latitude. Although not quite as popular as Sacrobosco’s De sphaera, the Cosmographia was nonetheless something of a print bestseller in the sixteenth century.

The Latin title of Giambattista della Porta’s (1535–1615) treatise on cryptography translates to On the secret writing of the alphabet. Although the wide-ranging thinker’s contribution to the field lies primarily in his creation of an early digraphic substitution cipher, he also has achieved a degree of recognition in the history of publishing as the inventor of interactive wheels for encoding the familiar roman alphabet into an alphabet of esoteric symbols. Provocatively, each of the three encryption devices that he prepared for the book features god’s hand emerging from a cloud, pointing at the symbol of the cross. Della Porta’s volvelles not only serve the handy function of encrypting text, they also take a bold position on the authority behind the cryptographic arts: God.

Volvelles show up in other, perhaps unexpected, areas of learning, too. Take for example Gioseffo Zarlino’s (1517–1590) work on calendar reform. Best known today as a music theorist and composer, Zarlino published this book for the consideration of Pope Gregory, who was eager to institute a new calendar that would bring Easter back to the time of the year when it had been observed by early Christians. Zarlino’s proposed calendar would not end up being the one Gregory adopted, but the ingenious volvelle he designed remains an impressive piece of information technology. By manipulating the discs, readers can reconcile the 28-year solar cycle of the Julian Calendar with the 203-year cycle that his book proposes. (Zarlino subdivides his solar cycle into seven 29-year periods, or “Great Years.” A solar cycle is the number of years before days of the week will recur on the same days of month.)

The Ransom Center is fortunate to have two copies of Zarlino’s book. In one, the volvelle has been assembled as intended. In the other, the two rotating pieces are uncut, still fixed in place as part of a piece of paper that came with the rest of the printed sheets.

Interactive features in early print extend beyond volvelles, too. In 1570, the skilled printer-publisher John Day issued the first English-language edition of Euclid’s (fl. 300 BCE) foundational work on mathematics. Presumably at the recommendation of John Dee, who edited it, Day furnished his large-format edition with figures able to illustrate three-dimensional solids fully, in three rather than two dimensions. Three of these figures appear in Book 11, where Euclid offers an account of what makes a pyramid a pyramid. After reading the definition, owners of Day’s edition could then manipulate the folding flaps to create the basic types: pyramids with three, four, and five sides.

Another mathematical use of folding devices comes in Simon Stevin’s (1548–1620) treatise on perspective. The Ransom Center’s copy of the 1634 edition of his complete works preserves an intact leaf of diagrams that the bookbinder was supposed to cut out and paste onto pages earlier in the book. Although the edition itself is in French, its Leiden publisher—the famous Elsevir press—anticipated that the bookbinders handling it for retail customers might only speak Dutch. Accordingly, they printed detailed assembly instructions in two languages: French is on the left, Dutch on the right.

These examples are only a handful of the early interactive devices in the Ransom Center’s stacks. To them could be added a large—and detailed—rotating engraving of the moon; a table for determining the movable feasts celebrated by the Church of England; volvelles issued as part of Athanasius Kircher’s monumental treatise on geology, his Mundus subterraneus (1665); and many others, all just as compelling. In its own way, each underscores the intimate relationship between new forms of knowledge and media design. Design not only communicates knowledge; it also creates it.