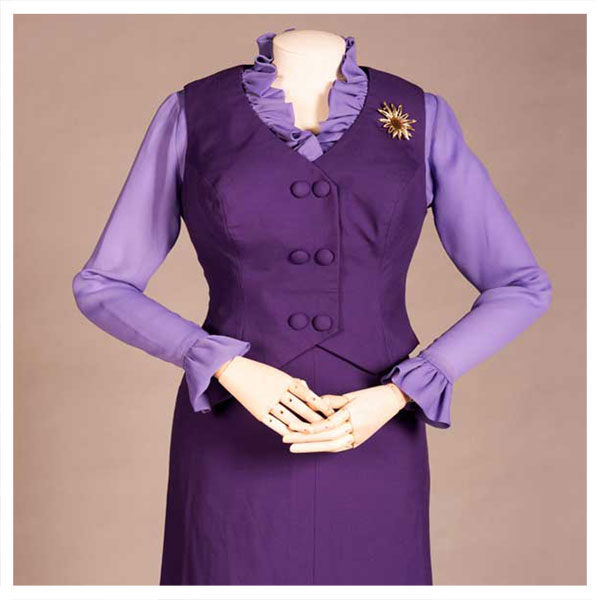 Currently on display are selections from the Mad Men archive, donated by series creator Matthew Weiner and Lionsgate in January 2017. Among the objects on view are notes on character development, revised scripts, props, and a lookbook and costume for Joan Harris, all from the Season 6 premiere, “The Doorway.”

Season 6 of Mad Men takes place at the end of 1967 and moves into 1968. In interviews costume designer Janie Bryant said that she saw the styles from this season as precursors to the bold, colorful trends of the 1970s, and she wanted this larger shift in style to mirror the changes the characters experienced on a personal level. As a result, there was significant variation in style during Season 6 among the cast. Megan Draper, for example, sports the newest trends of the moment, while Don Draper maintains his classic style, ignoring growing trends of thicker ties and more vibrant colors that other male characters wear.

Having started the series as office manager, Joan Harris is now a partner at the agency Sterling, Cooper, Draper, Pryce, and her style has evolved accordingly. The costume on display in Stories to Tell is the ensemble Joan wears in the season premiere. It still has the form-fitting silhouette her character favors, but includes ruffles, a vest, and an A-line skirt. Ruffled necklines and cuffs were mainstream trends of the 1960s, giving Joan’s outfit an up-to-date look, while the menswear inspired vest emphasizes her new role at the agency.

Also on display is a lookbook by Bryant created for Season 6, containing clippings of advertisements, catalogs, and fashion photography from the time period. It visually summarizes the feeling and styles for Joan’s costumes. The images evoke Joan’s self-confident, professional appearance.

In the late 1960s, clothing became softer and less structured because clothing manufacturers and designers used less seam-shaping and built-in bones—thin strips of plastic or metal usually inserted into the bodice —when making clothes. These methods shaped a woman’s body in accordance with the structure of the outfit and restricted movement. For example, pencil skirts, a hallmark of Joan’s style in past seasons, confine movement much more than an A-line skirt, which she wears in this episode.

According to Jill Morena, costumes and preservation technician at the Ransom Center, Joan’s costume was made entirely by Bryant and her team, with the exception of the ensemble’s brooch and earrings. Making the garments themselves allowed the team to recreate the style of the era while tailoring the costume exclusively to actor Christina Hendricks.

Bryant and her team also used vintage 1960s garments, which were tailored to the actor or modified to fit with the character and the scene. The inside of Joan’s costume is not finished with lining, which is common in film and television costumes; either the costume fits or drapes on the actor best without lining, there are time or budget constraints, or the interior of the garment will not be seen on camera, and therefore isn’t necessarily needed. The ultimate goals for Bryant and her team were to create costumes that embody the character’s style and personality, fit the actor well and are comfortable to move in given the demands and actions of the scene, and express the overall arc of the show’s narrative.

See these items from the Mad Men archive along with selections from the archives of Edgar Allen Poe, Kazuo Ishiguro, Anne Sexton, and others on display through February 26, 2018, in Stories to Tell: Selections from the Harry Ransom Center.