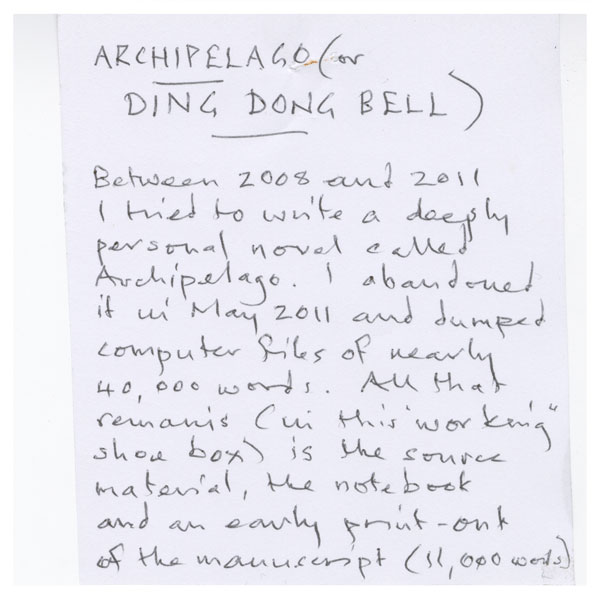 Image: Jim Crace’s handwritten note on the “Archipelago” folder in his archive.

When I came to the Harry Ransom Center in August 2017 to research in the Jim Crace papers, the materials I was most curious to view were those related to Crace’s unpublished novel Archipelago. The author of 11 novels, with a twelfth about to be published, Crace’s novels cover very different time periods, from the end of the Stone Age in The Gift of Stones (1988) to a post-apocalyptic future in The Pesthouse (2007), and often explore moments of transition.

What unifies Crace’s novels is his style, a rhythmic, rich prose that has the cadence of oral storytelling, as well as the faith in the power of narrative invention. Crace defines himself as a “nonrealist writer,” interested in “dislocat[ing] the subject rather [than] locat[ing] the subject in a familiar world,” and indeed his fictions, through the power of invented details, conjure up a world that critics have dubbed “Craceland.” What part of Craceland, I wondered, would Archipelago take me to?

For a while, Archipelago was due to be Crace’s last novel. In a 2007 interview Crace declares: “I will end my writing career with a final novel, Archipelago, an autobiography stitched from falsehoods and impossibilities and set—as you’d expect—in a group of uninhabited islands.” This was reinforced in a 2010 interview, though with a less definite tone—“I do intend Archipelago to be my final novel. I am sincere. But I might be fooling myself. Don’t start sighing yet”—and in 2011—“Archipelago [is] my most ecstatic and poetic novel yet. It’s a kind of Gulliver’s Travels in the geography of consciousness. But as soon as it is done, I intend to pull on my loudest shirt and go out into the world looking for some fun.” Luckily for his readers, this was not the case. Crace went on to publish Harvest in 2013 and his latest novel, The Melody, comes out in the UK on February 8, 2018 and in the United States on June 19, 2018. Archipelago, however, never saw the light.

The earliest reference to Archipelago in the Ransom Center papers is a 2008 proposal, where Crace defines this projected novel as the “strangest autobiography—an autobiography of the imagination, with no plainly factual elements at all.” Archipelago “is a novel about our imagined lives, the ones that run parallel to the duller ones we actually lead.” After a violent storm, time branches for the protagonist of Archipelago. According to his wife, he goes back to their holiday cottage to nurse the wounds he has suffered in the storm. According to the narrator, instead, a most uncanny journey begins. With the assistance of an unusual travel operator called Gulliver, he chases after ever-moving islands and the spirits of the dead, looking in particular for his father and mother-in-law. The unfinished manuscript held at the Ransom Center, dating back to 2011, ends just as the narrator begins exploring one of these islands.

Albeit unfinished, Archipelago is, in many ways, classic Crace: an invented geography, a non-realist story, the presence of Felix Mondazy, Craceland’s wise writer of folklore that appears in Being Dead, The Devil’s Larder (2001), and resurfaces in The Melody (2018), and the shadow of his father’s death, which had already inspired Being Dead. Indeed, the prologue to Archipelago is the short story “1979: Hearts of Oak,” a moving account of the months around the death of Crace’s father. So why was Archipelago abandoned?

Crace’s handwritten note on the Archipelago folder reads: “Between 2008 and 2011 I tried to write a deeply personal novel called Archipelago. I abandoned it in May 2011 and dumped computer files of nearly 40,000 words. All that remains (in this working shoebox) is the source material, the notebook and an early print-out of the manuscript (11,000 words).” This very matter-of-fact note contains an important clue: whilst hardly a traditional autobiography, Archipelago does have an evident “deeply personal” core that is unusual for Crace.

Frequently pressed by interviewers about autobiographical details in his novels, Crace’s stock answer is that a happy life, like his, would not be intriguing enough for readers: “Who’d want to read an autobiographically based novel with a contented, optimistic protagonist who had known nothing but good fortune? As has been said, ‘Happiness writes white’. It is not good material for fiction. Fiction likes distress, calamity, hardship, betrayal, dilemma, conflict.” 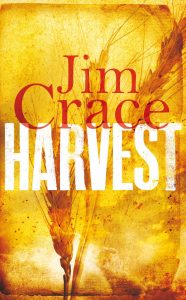 “Novel abandoned (‘Archipelago’)”—this entry appears on May 17, 2011 on Crace’s calendar. A few days later, notes on enclosure, farming, and Tudor England begin to appear. Harvest, which goes on to be shortlisted for the Man Booker Prize, is born. In an email to his United States publisher, Crace writes: “I realised that a central section in Archipelago about landscape, soil and belonging was the story demanding to be told. That’s the idea that flourished. […] Writing that earlier version was a maddening struggle; writing Harvest is a pleasure.” Perhaps appropriately, given the subject of Archipelago, the spirit of this novel lives on in Harvest and, Crace tells me, in the weather and sea-scape phrases of his 2018 novel The Melody.

Diletta De Cristofaro is a Teaching Fellow in English Literature at the University of Birmingham, UK. She researches contemporary British and North American fiction, with a specific focus on temporality. De Cristofaro was the recipient of an Alfred A. and Blanche W. Knopf Fellowship from the Ransom Center.