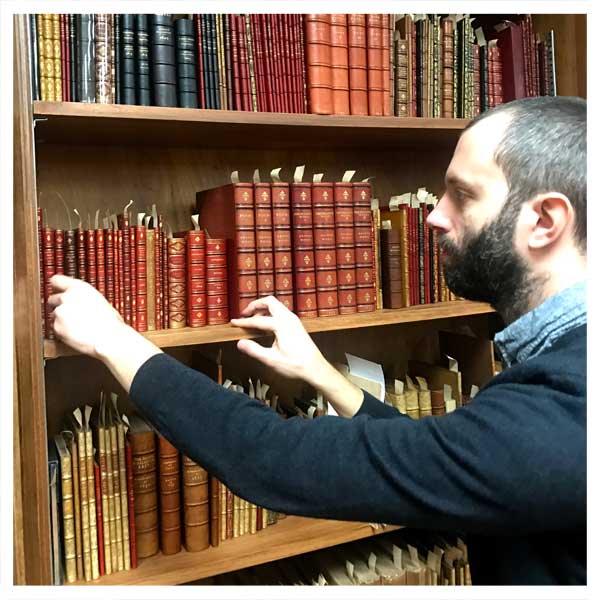 Image: Curator Aaron Pratt is the early and rare book specialist on staff at the Ransom Center. The volumes in the Wrenn Library have multiple layers of research value, including by author, genre, and the way they were created and collected.

One hundred years ago today, The University of Texas acquired a collection of 6,000 first and rare editions of mostly seventeenth- and eighteenth-century English and American authors, in addition to notable manuscripts of the Bronte sisters, Alfred Lord Tennyson, and the Brownings. This collection, known as the Wrenn Library, would plant the seed for what is today the Harry Ransom  Center.

In order to help the university build its reputation as a major research institution during its formative years, university regent benefactor Major George Washington Littlefield signed a $225,000 check dated February 21, 1918, to acquire the library of the late Chicago businessman John Henry Wrenn (1841–1911).

“At that time, The University of Texas was on the lookout for remarkable books because there was a sense that a ‘real’ research university needed a rare book collection,” says Aaron Pratt, the Carl and Lily Pforzheimer Curator of Early Books and Manuscripts for the Ransom Center. “The Wrenn Library was the first substantial rare book collection that The University of Texas acquired, and, understandably, it became a point of pride.”

The collection provides an interesting window into what an American  collector wanted from his books—what he cared about, what qualified as great literature to him, and what a distinguished collection of books should look like, Pratt says.

Wrenn collected early English and American literature and purchased many books from the English editor, bibliographer, and collector Thomas J. Wise, later identified as a forger and thief.

“This collection is perhaps most noteworthy for its wealth of early editions of British (and some American) literature” Pratt said, “but the copies can be deceptive. Collectors like Wrenn wanted complete copies with bright, clean pages. The fact, though, was that books in such condition were hard to come by.” 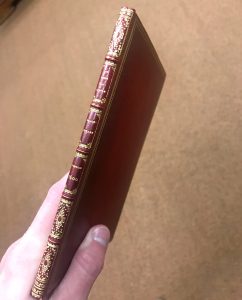 To work around this fact, Wise made what are known as “sophisticated” copies by combining leaves from multiple fragmentary copies to form a single complete one.

This practice was common with Shakespeare and Chaucer folios, for example, but Wise went above and beyond to make “perfect” copies, sometimes mixing and matching leaves from as many as four or five incomplete books. To make these hybrid copies appear uniform, bookbinders like the one Wise used on behalf of Wrenn would bleach and press each leaf, extending or trimming the blank margins as necessary.

“Expert bookbinders were able to hide evidence of the sophistication process,” Pratt said. “They were so good at this that it can be very challenging to detect.”

Sophistication should not be confused with forgery, Pratt says. Most of the time, collectors like Wrenn would have known that their books had been sophisticated and not seen this as a major detriment. In the case of Wise, though, it was later discovered that he had stolen leaves from books in the British Museum and intentionally misattributed anonymous works to known authors, and mixed parts from different publications to achieve more “desirable” copies.

“I think it is a mistake to associate sophistication, per se, with Wise’s other activities,” Pratt says. “The copies that resulted would have been very attractive to Wrenn and other collectors of his generation.”

Pratt calls the Wrenn Library a fascinating collection, not only because of the specific story of Thomas J. Wise, but because it is an example of changing tastes and attitudes toward early books and what a book collection should look like—how you should conserve books and what makes for an ideal copy.

“Collectors like Wrenn wanted original leaves, but not necessarily a completely original copy, and that’s a really important distinction,” he said. “Wrenn is perhaps the best American example of the kind of collector who was interested in completeness and cleanness and quality of presentation in accordance with the aesthetic standards of the nineteenth and early twentieth centuries. For me, as someone interested in the history of early modern books, the Wrenn collection stands as an important case study of a practice that was happening more broadly.”

The Wrenn Library, along with the libraries of George A. Aitken and Miriam Lutcher Stark, constitute the foundation of the rare book collections of the Ransom Center. The books within the Wrenn collection are important in and of themselves, and the sophistication and their complicated history add further dimension to what they can reveal to researchers.

“The collection is in some ways perhaps most important as a time capsule of what it meant to collect English literature in the nineteenth century,” Pratt says. “The collection taps into the kind of scholarship that’s being done on early books, which is to understand why we have them today in the way we have them.”