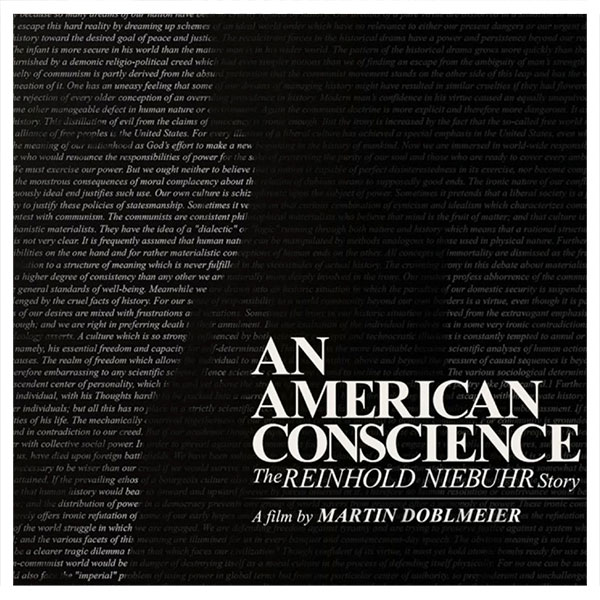 Prolific writer, theologian, and counsel to world leaders as relevant as ever 50 years after his death

Martin Doblmeier is an award-winning director and founder of Journey Films, a production company that specializes in TV and films focusing on religion, faith and spirituality. Doblmeier has worked on films that profile religious leaders, spiritual communities, heads of state, and Nobel Laureates.

The Harry Ransom Center and Austin Presbyterian Theological Seminary will host a screening and discussion of his film An American Conscience: The Reinhold Niebuhr Story on Tuesday, April 24, at 6:30 p.m. in the Charles Nelson Prothro Theater. The event is free and open to the public.

Can you briefly explain Reinhold Niebuhr’s significance and importance to someone unfamiliar with his work?

Reinhold Niebuhr was the great public theologian of the twentieth century.

He had a deep love of Scripture and sacred texts, a command of history and brilliant insights into our common human nature. And he used all of that as a foundation to confront the major social and political issues of his day in a way that both religious and non-religious people could understand and appreciate.

Even now we see, nearly a half century after his passing, Niebuhr’s arguments still offer valuable insights. One of the most meaningful tributes to his enduring legacy is that he continues to be quoted and drawn on by liberals and conservatives alike because his words transcend so much of the political rancor. And to read Niebuhr today is to recognize his gift for language that reminds us how powerful and effective the written word can be.

How did Niebuhr’s views shift over time? What caused these shifts?

Niebuhr was one of the most prolific writers in the modern era. He authored more than 20 books and literally thousands of major articles. He wrote constantly and used his pen as his way to publicly critique the world around him. As a result, his opinions did at times change. Or better said—his opinions evolved given the changing realities around him.

After witnessing the horrors of World War I, Niebuhr became an outspoken pacifist. But in the late 1930s, as the brutalities of the Nazi regime were becoming known, he took the unpopular stand that the United States must prepare for inevitable war with Germany.

Back home, Niebuhr initially joined the Socialist movement that was becoming popular in the 1920s and 30s. He believed at the time it was the best way to address the needs of the underclass in America. But as the Socialist Party became more aligned with communism, Niebuhr could no longer be part of it and withdrew.

Some would criticize Niebuhr for “waffling” on his positions but I think it is more accurate and fair to see how he made himself aware of the changing realities and had the courage to adapt accordingly. I think that aspect of Niebuhr offers a worthwhile example for politicians in our own times.

Reinhold Niebuhr was a spiritual leader during some of the nation’s most turbulent times, how might he feel about the current state of the nation? What aspects of his teaching are most pertinent today?

It is always risky to speculate about how a historic figure might respond to current social and political issues. But if there is one theme throughout Niebuhr’s writings that we might want to echo today it is his call for humility. It is a word we rarely hear in our current public discourse. And Niebuhr spoke of humility both in terms of individuals and as nations.

I suspect today Niebuhr would rail against a national arrogance that seems to guide our current politics and national identity. And as a person who always tried to speak out on behalf of justice, he would certainly point to the widening gap between the rich and poor in this country as evidence we have much work to do to strike a better balance.

What is Niebuhr’s legacy? How has it endured (or not)?

It may be true Niebuhr’s name and writings are not known in our contemporary culture in the same way they were in his day. And as we get deeper into the twenty-first century more of the past century is being forgotten. I think that is a mistake. There are great figures from that past that we have much to learn from and deserve being remembered. Niebuhr is certainly one of them.

In the making of the film it was interesting to see how so many people today who are entrusted with positions of power and responsibility read Niebuhr and want to speak about his impact on their own lives. People like President Jimmy Carter, civil rights leader Andrew Young, and others saw great value in Niebuhr’s insights and wanted to speak about his timeless writings.

So in that way, through the awareness of those in positions of power, and those who continue to teach Niebuhr in the classroom, and hopefully through our film, people will continue to reach for Niebuhr as a source of wisdom and inspiration.

As I travel the country with the film and engage audiences at dozens of screenings – I try to raise a critical question.  Reinhold Niebuhr was the leading public theologian in his day. Where are the public theologians for our times and how do we continue to nurture them and lift up their voices for all to hear?

You have created documentaries about a number of religious leaders (Cardinals Bernardin and Suenens; Dietrich Bonhoeffer; Reinhold Niebuhr), what has attracted you to these stories? Are there particular lessons or themes that emerge across your work?

The Reinhold Niebuhr film was my 32nd feature length documentary film. Many of those films have been biographical in nature. Whether it is BONHOEFFER or the Niebuhr film, biographies are an art form I love because in the storytelling I have the chance to dig deeply into a person’s character and, in particular, to explore that faith component that was so central in their lives.

Often you can see at critical moments, how their understanding of God and the divine offered the direction they longed for and the foundation they needed. And I cannot make these films without challenging myself to see in their lives something to enlighten my own path, something that informs my own decision-making process.  And I invite every viewer of these stories to do the same.

On survival and freedom in 1958 America: Mike Wallace and Reinhold Niebuhr

Willard is an undergraduate intern working with public affairs for the 2017-2018 academic year.