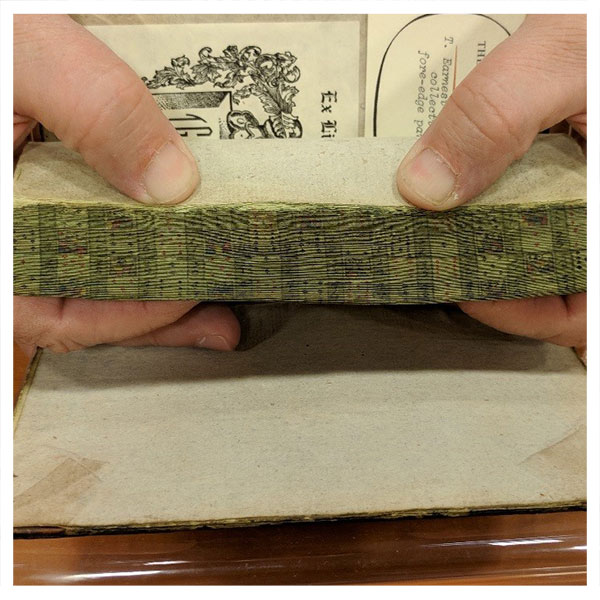 After a fruitful visit to the Harry Ransom Center in January, I tweeted,

“Who would have thought that I’d run into a Thomas J. Wise “sophistication” in my Hoyle research @ransomcenter?”

Like so many tweets, this is a bit tough to parse. Let’s break it into pieces: Hoyle, Wise, and “sophistication.”

I collect, study, and write about Edmond Hoyle (1672-1769), the most important English writer about card and board games. Eventually I hope to complete a descriptive bibliography of his writing and related work. For now, there are descriptions of about 200 Hoyles on my website and 125 essays on my blog Edmond Hoyle, Gent. Together, the two are the first iteration of my book.

I saw some lovely Hoyles at the Ransom Center. The most interesting was a fourth edition of his treatise on Whist bound with a first edition of his Backgammon treatise, both published in late June 1743. These are the first instructional books on the two games. What is unusual about the Ransom Center’s copy is that it was rebound sometime in the nineteenth century and decorated with a fore-edge painting of playing cards.

Wise (1859–1937) was a book collector, dealer, and author. He was president of the Bibliographical Society in the UK, had an honorary MA from Oxford, and a member of the Roxburghe Club, the oldest and most prestigious bibliophilic organization in the world. Sadly, Wise was also a forger and a thief. He and a partner reprinted facsimiles of literary pamphlets, selling them as originals. Wise also bought imperfect copies of Renaissance plays and combined them—often with leaves he stole from copies at the British Museum (now the British Library)—to make complete ones. He kept some of these for himself and sold others to collectors. In the 1930s, his schemes began to unravel as the forgeries were discovered, studied, and documented.

In The ABC for Book Collectors, John Carter and Nicholas Barker define sophisticated as follows:

This certainly applies to Wise’s efforts! With that background, let’s get to the sophistication I found.

The Humours of Whist

An anonymous writer satirized Hoyle in a play, never performed, called The Humours of Whist. It was published in May 1743, just weeks before the Whist/Backgammon volume. Hoyle appears as Professor Whiston, a Whist tutor; Sir Calculation Puzzle is a dim student who can recite all of Hoyle’s lessons, but cannot apply them at the Whist table. He loses constantly. I write about the satire in the essay “The Humours of Whist, a satire of Hoyle.”

Knowing the play, I was anxious to see the Ransom Center’s copy and was shocked to see a note in the library catalog: “Attributed to Garrick in the Wrenn catalog.” At the time, I didn’t know about the Wrenn catalog, but I certainly knew David Garrick! He is the most famous name of the eighteenth-century London stage both as actor and playwright. To me, Garrick is the Hoyle of theater, though more would say Hoyle is the Garrick of gaming. Could Garrick actually have written Humours?

The elegant Riviere binding shows Garrick as the author. What is the basis for the attribution? I examined the book and found a surprising sophistication. The first 56 pages of the book were identical with other copies I had seen, but pages 57 to 60, “An Epilogue between the Author and Bookseller,” were missing. That epilogue satirizes the troubled publishing history of Hoyle—Whist was pirated. See my essay “The Humours of Whist as a satire of piracy.”

Instead, a different epilogue appeared, “Epilogue, By the same hand as the prologue. Spoke by Mrs. Pritchard.” And the second epilogue came from a different play, Miss in her Teens: or, the Medley of Lovers, a 1747 work by… David Garrick. The sophistication was noted it the library catalog:

So, I was not the first to realize the problem. How did this book come to be the way it is?

I tracked down the Wrenn catalog and learned about the Wrenn collection. In 1918, the University of Texas acquired the collection of John Henry Wrenn, some 6,000 volumes of poetry and drama. Wrenn purchased many of the books from Thomas J. Wise. Wise was also the author of the five-volume catalog of the Wrenn collection. Wise sold Humours to Wrenn, as is evident in an inscription in the rear of the book bearing his initials and some early-twentieth-century dates when he may have acquired the book, or had it rebound for Wrenn.

So, Garrick did not write The Humours of Whist. Forger Thomas Wise replaced the epilogue with another known to be by Garrick, sold it as a Garrick to the unsuspecting Wrenn, and then attributed it to Garrick in his catalog of the collection:

I’m still left wondering who did write the play, but it is safe to rule out Garrick!

David Levy is a collector, researcher, and writer about early gaming literature, with a focus on the writings of Edmond Hoyle. You can follow him on Twitter @BooksOnGaming.