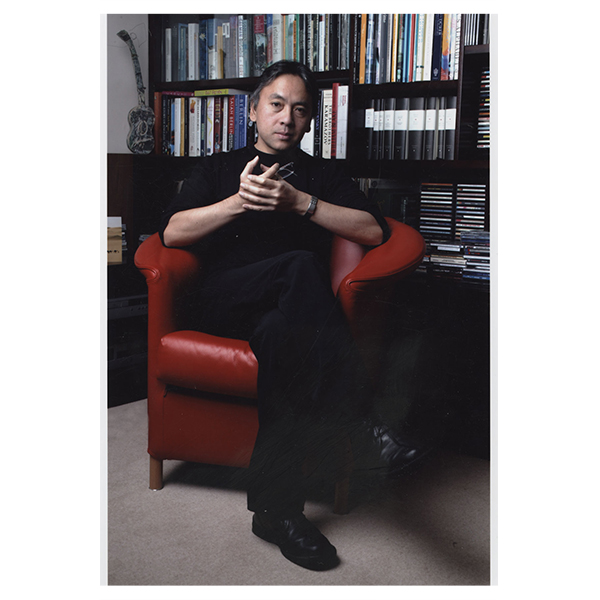 I visited the Kazuo Ishiguro archive at the Harry Ransom Center in June 2017, a few months before Ishiguro was awarded the Nobel Prize for Literature. This British writer of Japanese descent is famous for the suggestive quality of his writing, and in particular for his self-deceived, unreliable narrators.

I made some of my most exciting findings while studying the two manuscripts for Ishiguro’s first novel, A Pale View of Hills. The material for his early novels is thinner than for the later ones, and these manuscripts form the bulk of the resources for Pale View. At the time of writing, Ishiguro was not aware that he might want to keep all of his notes and drafts for archival purposes in the future. The writer explains as much, ironically on one of the post-its that accompany every single folder, bearing witness to a remarkable meticulousness in his preparation of the archive.

The two manuscripts (hereafter called MS1 and MS2) correspond to a late stage in the drafting and editing process, and bear relatively little difference to the published version. My main goal, while researching them, was to identify the evolution of the narrator’s unreliability and of its encoding at the different stages of writing. I was thus thrilled to find out that, although the ending of MS1 is virtually identical to the final version, MS2 contains an alternate ending which tends to highlight the narrator’s unreliability. In the last chapters of the published novel, the reader begins to perceive that the narrator and her friend Sachiko may in fact be one and the same person: Sachiko represents the narrator’s darker side, presumably resulting from her traumatic past in Nagasaki during the war. Sachiko’s daughter Mariko is also the implicit double of the narrator’s dead daughter, who hanged herself.

The last encounter between the narrator and Sachiko provides a good illustration of Ishiguro’s inner conflict between a desire for subtlety and a need for clarity. In the published version, Sachiko admits: “I realise we may never see America […] Did you think I never knew that?” In MS1, however, this passage is followed by an extra sentence, crossed out by the writer: “Did you really think, Etsuko, I believe even a fraction of the things I say?”. In this last sentence, Sachiko’s unreliability—and by extension, the narrator’s—goes from being suggested to explicit.

After this, the narrator goes out to look for Mariko, who has gone out of the cottage. In the published version, this scene points more explicitly than anywhere else in the novel to the possibility that Mariko and the narrator’s dead daughter might be one and the same person. In this chilling passage, the narrator approaches the little girl while holding a piece of rope she has found in the grass. Terrified, Mariko runs away, and the next day she and her mother are gone, presumably to America. We never learn of what has happened in the meantime.

All three versions include a second variation of this scene, but the manuscripts take the suspense further through unpublished passages in which the narrator tries to entice Mariko to the woods. Thus we can read in both manuscripts: “‘You could show me to the woods, Mariko. I’m sure it’s very nice over there. Why don’t we go over there now. Your mother wouldn’t mind, I’m sure.’ ‘I don’t want to go to the woods.’”

In MS2, Ishiguro pursues this development of the plot with a second, parallel scene which takes place a bit later in the novel, so that two episodes in the woods parallel the two rope scenes:

“‛Shall we go to the woods now?’ She turned and ran from me… I smiled reassuringly, then stepped up onto the bridge. The child began to run away again, and the boards shook beneath my feet. I continued to follow her at an easy pace.”

Still in the manuscripts, the narrator then goes back to Sachiko’s cottage, blatantly lying to her: “‘I don’t know where she could have gone,’ I said, as I sat down. ‘I walked all along the river but I couldn’t see her.’”

Finally, a second woods scene in MS2 points much more explicitly to the link between Mariko and the dead daughter, whose hanging body is evoked several times in the published novel, including through a dream in which the narrator thinks she sees a child on a swing—before realizing that “the little girl isn’t on a swing at all. It seemed like that at first. But it’s not a swing she’s on.”

Then, the narrator goes back out to the woods, where she encounters a mysterious object swinging from a tree, in a scene strongly reminiscent of this dream and suggesting that the narrator, or one of her personae, was involved in the death of the narrator’s daughter, Mariko’s double:

“I was in a clearing. But this time, as the shadows had moved with the lantern, I had seen something amongst the trees… Objects suspended from trees were not an uncommon sight during the war, and the clearing in which I stood was a likely spot for rifle practice. Quite probably, then, what had caught my eye was a remnant from these days. Or otherwise, it could have been something put up by children. A swing, perhaps.”

What the study of these two manuscripts shows is that while writing his first novel, Kazuo Ishiguro went back and forth between different versions, each with a different degree of explicitness on the narrator’s threatening character and her split self. The published version is overall closer to the first manuscript, and much more allusive than the second one, a faithful reflection of Ishiguro’s assertion, in a note on the novel, that “the language must be one which ‘hides more than it reveals’.”

Just like his narrators, Ishiguro seems to feel a permanent tension between the impulse to tell and the desire to conceal. What the archive does is precisely show us what was meant to be hidden, tell us what was only hinted at, and shed light on the shadowy zones in Ishiguro’s novels, sometimes revealing an even darker world than suspected.

Enora Lessinger is an alumna of the Ecole normale Supérieure and currently a Ph.D. student at the Sorbonne Nouvelle in Paris, France. Her research topic, “Translating Silence in Kazuo Ishiguro’s novels: Testing the Explicitation Hypothesis on Unreliable Narratives,” is at the intersection between literary studies and translation studies, and involves six different languages. Lessinger was the recipient of a Harry Ransom Center dissertation fellowship jointly supported by the Creekmore and Adele Fath Charitable Foundation and The University of Texas at Austin Office of Graduate Studies.