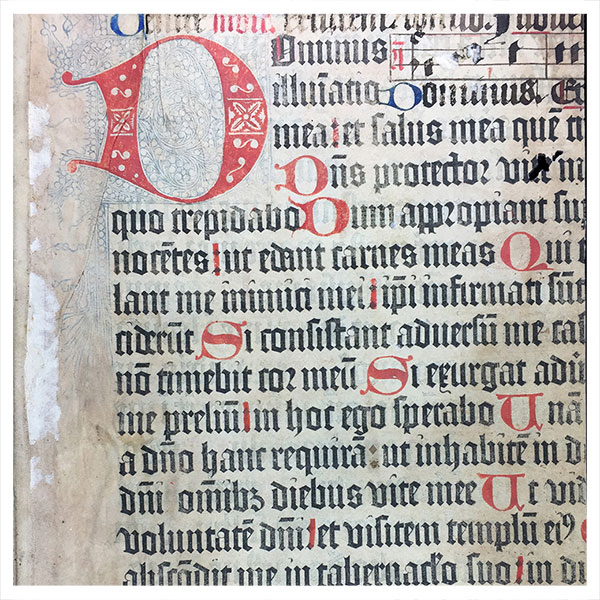 In order to understand the Gutenberg Bible, it is critical to remember that it is a medieval book that was designed to satisfy the needs of medieval readers. Today, we expect pages in most books to be black and white. To navigate what we read, we rely on variations in typography, centered text, indents, and other creative uses of white space. These are the design elements that signal chapter, paragraph, and other section divisions. When Gutenberg was developing his printing technology, though, color often did much of this work. Well aware of the expectations readers of his Bible would have had, his team developed a process to print red text alongside black, but it was apparently cumbersome: they used it for only a handful of pages before giving up, instead leaving blank spaces for scribes to fill in later, by hand.

This meant that, if you bought a brand-new Gutenberg Bible in the fifteenth century, your book would not have been complete and ready to read until you found a scribe—and, optionally, another artist to provide more elaborate decoration. So, in addition to the fact that the design of Gutenberg Bibles was the product of a long tradition of manuscript production that preceded the press, Gutenberg Bibles are also, in part, manuscripts. Indeed, Gutenberg’s team does not appear to have tried to print the larger initial capitals that begin sections, so even if they had gone forward with printing most of the red text, owners would still have had to employ scribes. By design, the Gutenberg Bible is a print-manuscript hybrid, as the appearance of surviving copies, like the Ransom Center’s, makes clear.

In 1455, Gutenberg’s business partner, Johann Fust, sued him and went into business with one of his former employees, a man named Peter Schoeffer. Fewer than two years after the lawsuit, in August 1457, their new operation published a book that has the distinction of being the first piece of European print to indicate the date of its publication and the names of its publishers. At the very end of the book, Latin text—printed in red—tells that

The present book of the Psalms, decorated with the beauty of capital letters and sufficiently marked with rubrics, by the ingenious invention of printing with letter forms has been fashioned without any driving of the pen; and in praise of God it has been brought industriously to completion by Johann Fust, citizen of Mainz, and Peter Schoeffer of Gernsheim, in the year of the Lord 1457, on the vigil of the Feast of the Assumption. (Translated in Eric Marshall White, Editio Princeps: A History of the Gutenberg Bible (London: Harvey Miller Publishers, 2018), 27.)

As the passage proclaims, their book, known as Mainz Psalter, includes both capitals and red text (“rubrics”) that have been made “without any driving of the pen.” Fust and Schoeffer did what Gutenberg and his team had not: they insisted on replicating the look and feel of manuscript books mechanically, without relying on scribes. Mostly. As a psalter designed in part for use in church services, their book needed musical notation, and this was beyond even the innovations of Fust and Schoeffer. In surviving copies, the music has been added in manuscript. Still, Europe’s second printing business developed a three-color process that allowed capital letters, surrounding decoration, and red text to be printed at the same time, usually in a single pass through the press. Fust and Schoeffer, we might say, had succeeded in printing manuscripts. Of course, if we were fifteenth-century readers, we would just call them books.

The Ransom Center is fortunate to have a fragment of the Mainz Psalter that was once recycled as part of a bookbinding. Currently, it is on display in the lobby alongside the first volume of the Center’s Gutenberg Bible. Both show Psalm 26/27. In the Gutenberg copy, the two-tone “D” with which the Psalm begins and all of the other color initials on the pages are in manuscript. In the Mainz Psalter, though, the bulk of the text, the red capitals, and the fine blue linework around the large “D” have all been printed. Modern bibliographers believe that Fust and Schoeffer achieved such a precise and consistent boundary between colored initials and their contrasting decoration by separately inking two metal plates that then fit together snugly on the surface of a wooden block and went through the press, usually along with rest of the page.

While printed red text would become routine in liturgical books, almanacs, and a handful of other publications, Fust and Schoeffer’s more ambitious process remained idiosyncratic. In fact, it would take only 50 years or so before the efficiency and economy of single-color printing largely shifted readers’ expectations toward a black and white page, even for large, deluxe books such as Bibles. In the middle of the fifteenth century, though, the conventions of existing manuscripts exerted a force that Europe’s first printers could not afford to ignore.

Instructions for reading aloud in the Gutenberg Bible

“Hasty and exuberant” decoration in the Ransom Center’s Gutenberg Bible

From Mainz to Austin: Carl H. Pforzheimer’s Gutenberg Bible and its earlier owners