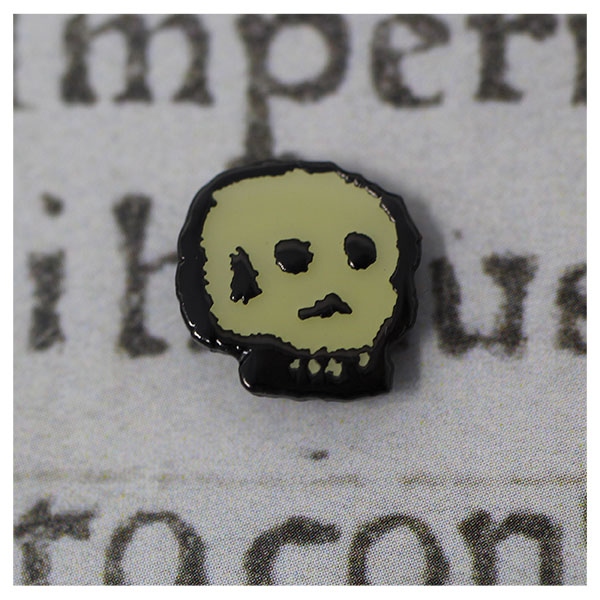 A current Stories to Tell display embraces the Halloween spirit with a collection of early printed books from throughout the Ransom Center’s collections that take on the topic of death. Carl and Lily Pforzheimer Curator of Early Books and Manuscripts Aaron Pratt put together a group of works ranging from spiritual ruminations to recommendations on will writing that explore the concept of “dying well” in early modern England. Accompanying the display is an enamel pin based on a tiny skull illustration Pratt found in a printed book from 1475, now sold in the gift shop. Pratt talks about his inspiration for this exhibition, the importance of presenting special collections material in ways accessible to the public, and the significance of that skull.

Austin Downey: What was your thinking behind your choice of items to present and what themes were you trying to weave into the display?

Aaron Pratt: Often when you see exhibition work done on the idea of death in early modern Europe or death in general, the emphasis tends to be strongly on the visual materials, such as skulls and images of skeletons. Instead, I was trying to think more broadly about a way to show how the English portrayed in the sixteenth, seventeenth, and early eighteenth centuries different concerns with death, including both the practical and spiritual considerations related to dying.

Most of what I show in the current display discusses ways to grapple with the reality of death in different confessional frameworks. Some works were produced by English Catholics and some—the majority—by English Protestants. It would have been easy for me to pick a dozen devotional tracts because there are quite a number of publications that were produced in early modern Europe to help people deal with death spiritually. But I also included some material on the plague, because it’s both something that kills you and something that, because it can kill you, makes you think about death and then prepare yourself spiritually. So, the plague provides a particularly early modern context for explaining why people were so concerned with death.

In the Frances Norton treatise, which Norton wrote in the early eighteenth century following the death of her own daughter and the trauma that that caused her, you can see the messages that first, you will die, so make sure that you’re personally taken care of, and second, other people will also die and you need to be able to grapple with that reality as well.

So, there is the spiritual side of how you deal with somebody else’s death and the spiritual—and essentially psychological—aspect of how you grapple with the inevitability of your own death. And then there are wills, because when somebody dies, there’s the matter of dealing with their stuff. When you’re dying, the last thing you want is for your death to cause even more trouble for people. So you need to have your ducks in a row legally. I was trying to think about how we could give, in a very small space, a sense of the different ways that death affected life in early modern Europe, and in early modern England in particular.

Are there any developments in the book trade during the time period that you covered that we can see through the lens of “dying well”?

The book trade expanded rapidly across the sixteenth century and into the seventeenth century: there were more and more books being printed, and there were more and more people reading. But well before this expansion in the age of print, there had been a long manuscript tradition coming from the Middle Ages of memento mori treatises and what’s called the ars moriendi, the art of dying. So, we are dealing with a long spiritual tradition that the book trade continued and amplified.

It’s not so much that the printed book trade was doing something qualitatively different with these texts on “dying well,” but rather that it was doing something quantitatively different, which is to say there were more and more books out there. Once you know there’s a captive market for devotional books, you start to see there’s not just one devotional book on death, there’s a dozen, and you see a market impulse to write new and more books on death-oriented prayer. This generated a degree of variety as authors sought to differentiate their works from others, but there’s a huge amount of overlap from one work to another.

Do you know where the phrase “dying well” comes from?

That’s a good question. The term ars moriendi was current in Latin during the Middle Ages, and you not infrequently see this translated into English as “dying well”—the “well” part is kind of implicit in the idea of there being an “art” to dying. Nobody, presumably, wants to die poorly. I don’t know what the first piece of English writing to use the phrase “dying well” is, but the idea is baked into the tradition from the beginning.

Did you begin with the concept of dying well for the display, or did you have another idea and then gravitate towards it because of the texts?

We had shared some ideas as a curatorial group about Stories To Tell displays anchored around the broader concept of dying. After all, there’s the loose seasonal connection. But, more substantively, one of the things that I’ve been trying to do with my Stories To Tell displays is to bring together groups of materials that show off early book collections that the Ransom Center is not necessarily well known for. As you probably know, we have an international reputation as a literature and arts collection and that’s, in general, where our strengths are. But a lot of the early books we have are not quite capital-“L” literary. So a goal for me with Stories to Tell is to find ways to highlight things that don’t usually get a lot of air time in the early book collection.

So obviously the display was timed to coincide with Halloween. What do you think is the importance of presenting archival material in a way that makes it relevant and timely for a general audience?

Because I’m always working with materials made before 1700 or so, it can be hard to make the objects I show immediately legible to modern visitors. Even if somebody has never seen or used a typewriter, for example, there’s a good chance they’ll know what they’re looking at when they see a typescript, or when they’re told they’re looking at the draft of a novel or screenplay. But with the “Dying Well” display, for example, there’s some pretty complicated Protestant theology that you need to understand in order to appreciate why people were worried about dying in the ways they were. And hardcore theology can be a hard pill to swallow in the space of a normal exhibition. So much of the religious material that I could show would be mired in these very historically specific debates that are not necessarily legible to contemporary readers.

And so I thought one thing that would be nice about a “Dying Well” display aside from it coinciding with Halloween is that it could provide a way to show some of our explicitly religious materials from the early modern period in a framework that might be immediately compelling—we all know about death, after all. If I had just showcased more abstract debates about Calvinism in the fifteenth, sixteenth, and seventeenth centuries—that’d be rough. Frankly, if I’m going to be successful at getting people to read a label about predestination, a death angle is probably my best bet. And I want people to read a label about predestination. 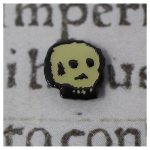 There’s a pin that’s been specially designed to accompany this display. Can you tell me about its origin and significance?

I’ve been working on another project with some undergraduate interns re-cataloging our printed books published before 1501 to better record provenance information—information about former owners, early bindings, etc. As part of this project last year, we were going through a book written by the man who later became Pope Pius II. Before he became Pope, he wrote, among other things, a history of Bohemia. It came out in 1475, and we have a copy of the first edition. It’s a history book, but at the very end, after the history itself has concluded, there is a line that reads “Memento Mori,” and then, under it, there’s a tiny of image of a skull. Neither have anything to do specifically with the content of the work. And I think that’s what’s interesting, because it speaks to the fact that remembering one’s own mortality was considered always relevant.

More broadly, Memento mori imagery was everywhere in medieval and early modern Europe. It was woven into tapestries, carved into bed posts, painted on plates, worn as jewelry. It became, quite literally, fashionable. Aside from the basic fact that the skull in the Pius II history is pretty appealing visually, I like it as an instance of memento mori imagery because it speaks to its pervasiveness: if it could appear at the end of a history of Bohemia, it could—and did— appear pretty much anywhere.

The materials are on view through February 10, 2019, in the Ransom Center’s Stories to Tell exhibition.