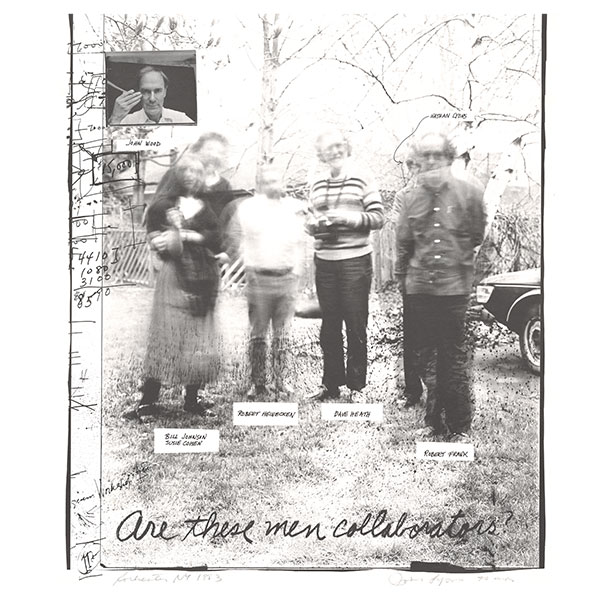 More than 35 years ago, prominent artists Robert Frank, Dave Heath, Robert Heinecken and John Wood agreed to participate in a project exploring creativity in photography. Led by art historians Susan E. Cohen and William S. Johnson, the three-year collaborative project examined the artists’ creative process . Until now, no comprehensive record of those efforts  has been accessible.

Conceived in the early 1980s by Cohen and Johnson, the project included  the participation of photographers Frank, Heath, Heinecken and Wood. Years later, Cohen and Johnson reflected that the artists “agreed to collaborate with each other and with us to make an exhibition that presented not only their finished work, but also the decisions and actions they made during the creative process.”

Starting in January 1983, the historians conducted interviews with each of the artists, facilitated meetings among them and observed them in the studio.

Cohen and Johnson worked with each artist to select work for the touring exhibition Four Photographers: Robert Frank, David Heath, Robert Heinecken, John Wood, organized at the Visual Studies Workshop in Rochester, New York. Artist Joan Lyons, director of the Visual Studies Workshop Press, designed an illustrated catalog to include a 16-page signature created by each participating artist and essays by Cohen and Johnson.

The planned exhibition and catalog were never completed, and the project came to a halt when a corporate sponsor redirected additional  funding. Cohen and Johnson’s catalog essays were published in Horses, Sea Lions, and Other Creatures: Robert Frank, Dave Heath, Robert Heinecken, and John Wood (Joshua Press, 1986), a privately printed book. An edition of 15 copies was produced for participants and supporters.

The archive includes more than 50 hours of audio and video interviews and conversations, research notes and essay drafts, letters and postcards, layouts and revisions and photographs of meetings and studio sessions. Among the materials are the artist’s maquettes that Frank, Heath and Wood designed for their signatures in the Four Photographers catalog. Also included is a copy of Heinecken’s artist’s book 1984: A Case Study in Determining an Appropriate Newswoman (A CBS Docudrama in Words and Pictures), printed from his maquette for the project in 1985.

The archive is an important “time capsule,” said Jessica S. McDonald, the Ransom Center’s Nancy Inman and Marlene Nathan Meyerson Curator of Photography. “It represents a remarkable coming together of people and ideas at a pivotal moment in photography’s history.”

Throughout the project and after, the artists wrote letters and inscribed photographs to Cohen and Johnson. Photographs in the archive include Frank’s U.S. 90, en route to Del Rio, Texas, 1955, inscribed to Cohen and Johnson and their children; a triptych by Heath, with a printed poem titled For Susie (and Bill), 1984; a 20 x 24-inch photogram by Heinecken titled Iconographic Art Lunches #3, [1983], made as Johnson observed in the studio; and Wood’s Eagle Pelt, 1985, the photograph that became the first image in Wood’s maquette for his signature in the planned exhibition catalog.

The archive is an especially fitting addition to the Ransom Center’s internationally renowned photography collection, which traces the advancement of photography as a creative art from the earliest days of the medium.

Once processed and cataloged, the materials will be available for research.