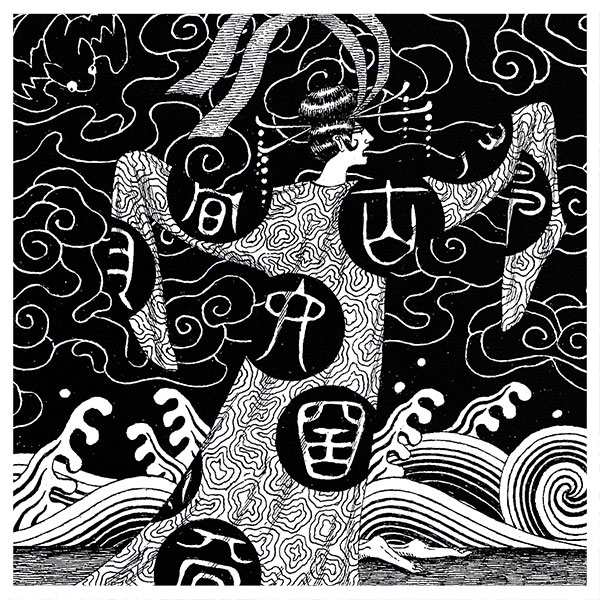 Critics never quite knew what to make of Edward Gorey (1925-2000), the author and illustrator whose darkly droll tales have influenced Tim Burton, Lemony Snicket, Alison Bechdel, and Guillermo Del Toro.

In his illustrated lecture on Thursday, Feb. 21 at 7 p.m., cultural critic Mark Dery, author of Born to Be Posthumous: The Eccentric Life and Mysterious Genius of Edward Gorey, explores the obscure influences haunting Gorey’s work.

Discover the seminal role he played, along with authors like Maurice Sendak and Dr. Seuss, in the popularization of a deeper, darker children’s literature capable of addressing what Gorey called “the miseries of childhood.”

In advance of his lecture he shared more about his fascination with Gorey and research in his collection.

Jared Neuharth: What attracted you to Edward Gorey?

Mark Dery: His uncategorizability, if that’s a word. (Now it is!) Like the Taoism, Surrealism, and Beckett-ian Absurdism that informed his work, Gorey defies neat philosophical binaries; just when you think you’ve squeezed him into a critical pigeonhole, he breaks the habit of a lifetime and does the exact opposite! He was a passionate lover of words, the more obscure, arcane, or sesquipedalian the better, collecting long lists of them in his ever-present pocket notebooks, but produced a “silent” book consisting of nothing but illustrations (The West Wing) and another that’s pure gibberish ([The Untitled Book]), a string of meaningless sounds signifying only Gorey knows what. He worked in a children’s medium, the picture book, yet few of his books are children’s books in the Dr. Seuss or even the Maurice Sendak sense—certainly not his mock-pornographic story, The Curious Sofa, or his ghastly true-crime tale about two serial killers of children, The Loathsome Couple.

His stuff shares cultural DNA with the graphic novel, the comic strip, silent movies, artist’s books, the “collage novels” of the Surrealist Max Ernst, mock-moralistic books like Hilaire Belloc’s Cautionary Tales, the Victorian nonsense verse of Edward Lear and Lewis Carroll but it’s in a genre all its own, just as Gorey himself was a species of one. He wrestles with life’s deepest, darkest questions—the meaning (or meaninglessness) of life, the inevitability of death, “the miseries of childhood”—but does so in a determinedly frivolous fashion. Inversely, he treats the frivolous with poker-faced solemnity. Maybe that’s why critics tend to stitch together hyphenated phrases when trying to describe Gorey’s work. (My contributions are “camp-macabre” and “ironic-gothic.”)

So, I was drawn to Gorey’s work because of its brain-tickling ambiguities, which unsettle the either/or way we view the world, but also because of its Surrealist mysteriousness, its tongue-in-cheek lugubriousness (which is what I mean by ironic-gothic), its Beckettian view of the human comedy as a dark farce. And then there’s Gorey’s genius as a writer and an artist, no small part of the pleasures of his work: those perfectly balanced sentences, which always manage to sound like Surrealist maxims, hiding a deeper truth in a laconic one-liner. Those exquisite pen-and-ink drawings, the machinelike precision of their stippling and crosshatching fooling the eye into believing they’re Victorian engravings. How can you not want to step into his world?

Finally, Edward’s utterly unselfconscious uniqueness charmed me out of my socks. In a world that pays endless lipservice to creativity and authenticity yet is more and more ruled by the approval ratings of re-tweets and Likes, Gorey was a world-class eccentric, part born oddball, part self-created fiction. “Part of me is genuinely eccentric, part of me is a bit of a put-on,” was his way of putting it.

Did you encounter any difficulties while researching Gorey?

Probably the trickiest aspect of writing Gorey’s life was what Gorey himself conceded was the “featurelessness” of that life. Gorey spent much of his existence huddled over the drawing board, crosshatching his days away. His daily existence was ruled by routines so fixed they verged on the obsessive-compulsive. He spent much of his life in the dark, watching ballets and movies. When he filled out the Proust questionnaire for Vanity Fair, he answered the question about his favorite journey with the reply, “Looking out the window.” I mean, this was a guy who “never could understand why people always feel they love to climb up Mount Everest when you know it’s quite dangerous getting out of bed.”

Then, too, as I note in the book, another difficulty of biographizing Gorey is his mysteriousness, starting with his sexuality (Was he gay? Was he asexual? “Neither one thing nor the other, particularly,” as he insisted?) but extending to every nook and cranny of his personality. An only child and a lifelong singleton, he was shy and aloof and secretive, a master of evasion in interviews and silent as a tomb, even with his closest friends, on personal matters—his childhood, his parents, his love life. Yet he journeyed far between his ears, so I focused on his inner life in the creative, intellectual, and psychological senses. He was a polymath, inexhaustibly interested in everything under the sun, and able to chatter on brilliantly about silent film and Japanese literature of the Floating World period and nineteenth-century ballet and the painter Francis Bacon and Samuel Beckett and Jorge Luis Borges and the 1968 Filipino horror movie Brides of Blood, you name it! Also, I looked for his secret self between the lines of his writing, and hidden—often in plain sight—in his art.

Could you elaborate on what you mean by “born to be posthumous”?

Wouldn’t that be giving the game away? Following Gorey’s example, I’m going to leave the unriddling to the reader.

With over 100 books and illustrated works, numerous paintings and even puppet shows, was there ever a time Gorey wasn’t working on something?

Seemingly not. He did spend years of his life in theater seats, as I mentioned, watching movies and ballets, but he does seem to have mastered the ability to extract more hours from a day than most of us. In the book, I quote Anthony Schierman, the son of Gorey’s ballet-circle friend Mel Schierman, on Edward’s mind-boggling mastery of multitasking: “He’d read a novel a day while watching five TV shows, sitting there knitting stuff, making these bean-bag things, going to the movies at night, eating out twice a day … and then still [find] time to do the drawings that he did. I don’t remember him sleeping very much.”

Could you explain Gorey’s “sinister-slash-cozy” aesthetic?

It’s the sweet spot where the gemütlich (cozy domesticity) meets the unheimlich (Freud’s word for the uncanny, literally, the “un-homelike”). Agatha Christie’s snug little country-manor mysteries, where the crumpet-dunking Englishness Gorey adored sits side by side with bloodstains on the hearth rug and bodies dredged up out of the reflecting pond, captures it perfectly. Gorey liked a good mystery, which is why he read (and re-read, and re-re-read…) Christie and Sherlock Holmes, but he didn’t like to be creeped out, which is why he wouldn’t read the Victorian master of the ghost story, the truly unsettling M. R. James, after dark. Likewise, he liked true crime if was old enough to assume the quality of a fable, like Lizzie Borden, but he shrank from the sordid nature of more recent horrors like the Moors Murders, which inspired his only truly nasty piece of work, The Loathsome Couple.

Many. The Harry Ransom Center is an Aladdin’s cavern for any researcher, and the Gorey archive proved no exception. I found Gorey’s unfinished novel, Paint Me Black Angels, begun during his undergraduate years at Harvard; a preternaturally insightful term paper (also from Harvard) on La Rochefoucauld, whose mordant epigrams appealed to Gorey and speak volumes about his genially misanthropic view of the species; and scores of doodles and drawings that bear witness to the emergence of Gorey’s early, cartoonish alter ego, Mr. Earbrass, who would go to star in his first published book, The Unstrung Harp. His correspondence with his smothering mother Helen, who was very much the don’t-forget-your-rubbers type, was revealing, too—not to mention unintentionally hilarious in spots, such as the letter in which she helpfully includes a newspaper clipping from a pop-psych columnist, reassuring people with receding chins that it wasn’t a sign of weak character. Gorey, famous for his Old Testament whiskers, first grew a beard to conceal what he believed to be his lack of a chin, it turns out. Who knew?